Learning from Berlin – How to Create an Innovative Community

In recent offices and coworking spaces, an increasing number of people are working to foster “innovative communities” that stimulate collaboration among workers and create new services and products. However, the development of such a community is not easy. In this article, I will focus on the development of a community that creates innovation from Berlin, Germany, where I visited.

Now Berlin is booming as a global startup city. In the EU, it has an entrepreneurial culture comparable to that of Paris and London, and there are various coworking environments in the city. Why is the stage for entrepreneurship now set in Berlin? I chose to look up this city because it became apparent that Berlin was good at “creating a community to take action.”

This time I’ll be discussing Berlin with the theme and question, “What kind of community formation encourages members to learn and be stimulated?” First, we will touch on the cultural background of Berlin, which is essential for understanding the stories of these communities.

Background To Community Growth in Berlin

Here’s a brief explanation of the background behind the community-building know-how in Berlin, including the local startup and co-working situation.

Berlin is the third-largest startup city in the EU after London and Paris. In the 2019 Global Startup Ecosystem Report (GSER), which summarizes the European tech community, Berlin ranks within the 10th place every year in the past five years as a startup ecosystem city. It also serves as the host city of Tech Open Air, one of the largest tech Open Air conferences in the European Union, which is based on the theme of innovation. The event attracts enthusiastic startups from Europe and the Middle East every year in Berlin. In addition to its growth, the EU’s most prominent startup ecosystem in London is getting a lot of interest from the home of Silicon Valley, as BREXIT shakes it.

The background of Berlin as a startup city is largely related to its history. After World War II, the city experienced a long period of turmoil until the fall of the Berlin Wall in 1989. Compared with other German cities such as Frankfurt, a financial city that supports a strong German economy, Munich which is strong in the automobile industry, and Hamburg which is well-known for the manufacture of airplanes and ships, Berlin was a “poor” city.

Many artists from Germany and abroad have moved to the city, where prices were low and there were many vacant buildings, forming a unique culture that excelled in the field of art and music. While maintaining an anarchic atmosphere, Berlin boasts high internationality with more than 71 million foreigners living in 2017 (* 1) and is also English-speaking. It’s a good place for many entrepreneurs around the world. It was an attractive city. It is also symbolic that SoundCloud, which is famous for its voice file sharing service, is a typical art-based startup that was born here.

*1 from the data of the Berlin-Brandenburg Statistical Institute

In the city where the startup ecosystem continues to grow, the co-working space market will also inevitably be activated. Since 2005 when Sankt Oberholz, a well-established German co-working industry, opened its first space in Japan, there have been many “co-working cafes” in the Mitte district of Berlin.

Today, it is used by various corporate workers regardless of scale or nationality. In fact, it’s a place where the business community is formed. Recently, “co-living,” which is a community living and working together that has a stronger sense of community than conventional co-working spaces, has gained in popularity becoming a main feature of startup culture in Germany. 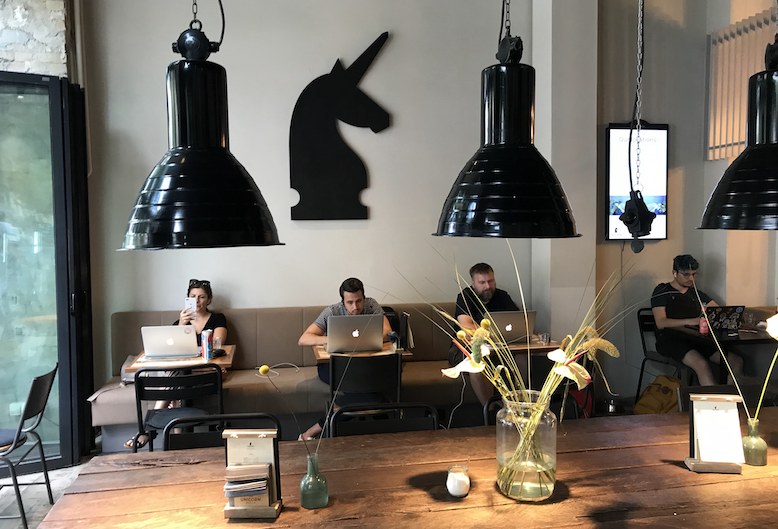 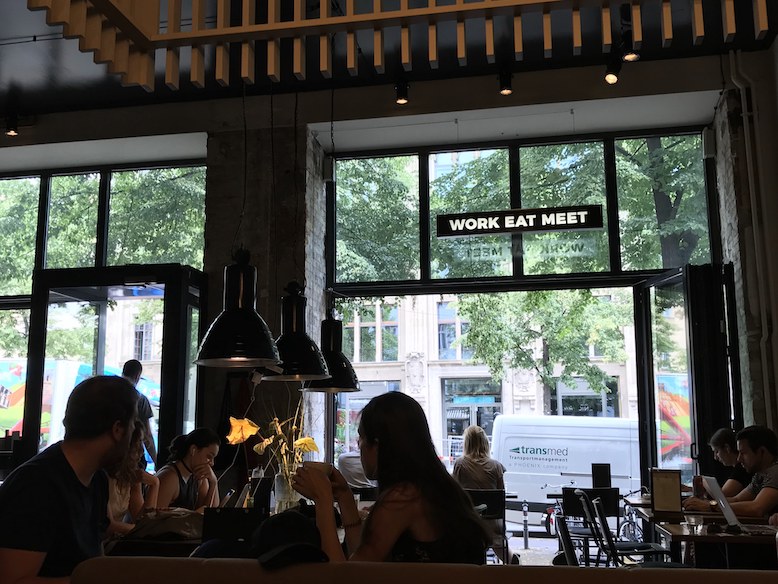 Examples of Original Communities By Citizens: Holzmarkt and Baumhaus

The fact that there are several communities in which citizens cooperate to form a unique sustainable culture without relying on the government symbolizes the strength of Berlin citizens’ community awareness. It is also a sight unique to Berlin that there are many communities such as Holzmarkt and Baumhaus that use pacifism for business in a “give first” spirit. People who work in the American startup industry are often attracted to Berlin and have moved there.

Originally, the club “Bar25,” which was enthusiastically popular until the closing of 2009, where it was forced to evict in the urban development of the city of Berlin. The city was trying to build a large-scale commercial facility called “MediaSpree” in this area, but local residents who wanted to give priority to the atmosphere as a cultural city. However, the waterfront landscape showed opposition to the construction of modern buildings. In order to show the importance of a community that fosters a culture directly linked to the lives of citizens rather than an economic effect, Bar25’s former members signed a land contract with the Swiss pension fund to build a community in Holzmarkt.

With the help of investors, there was a small amount of money, but the land had to be paid without knowing how to use it. For this reason, they temporarily built restaurants and clubs that gathered some 2000 people on weekends. They built a sustainable community, earning little by little, starting with a beach bar made from recycled materials and a record studio. The construction and operation of the building seemed to have been supported by photographers, architects, party organizers, chefs, hackers, and others with various backgrounds.

Even after the operation started, the founding members continued to form their own culture, not money. In particular, profits from sales of beers, which are often sold at parties, rental of record studios, and rent of office space were reinvested into preschools and music studios. In July 2019, when I visited, 80 businesses had already moved into this office, and the kindergarten had grown to a community with 33 children attending.

The government is still confronting the administration, and the situation continues to be tense, with the possibility that the building permits for future facilities may not be renewed recently. 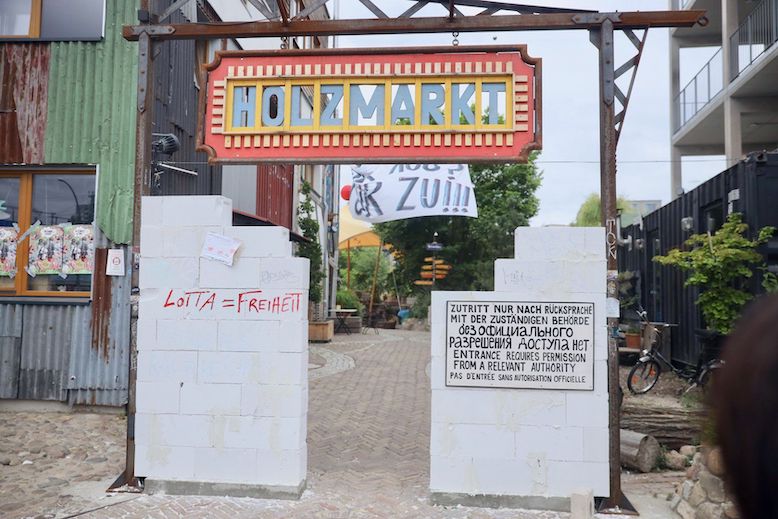 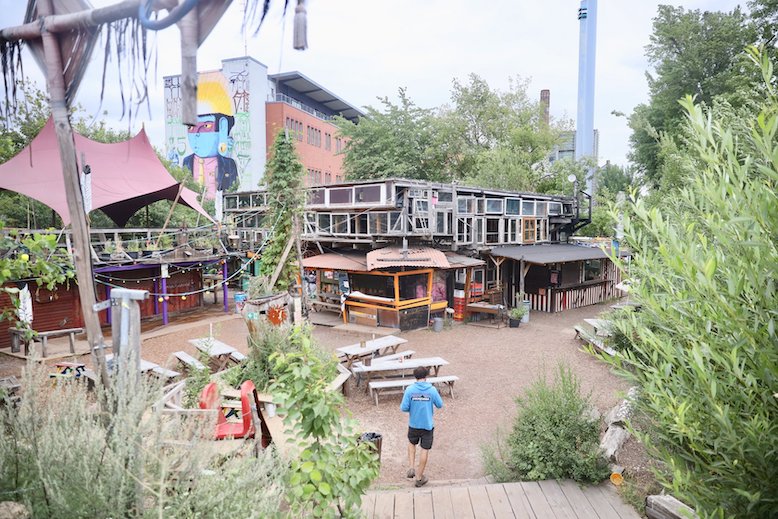 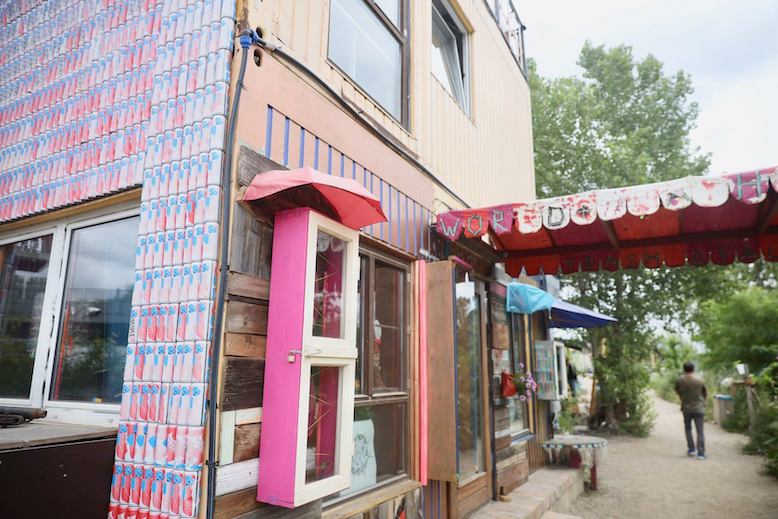 The Baumhaus was launched by Scott, an engineer and designer from New York, USA, and Karen from Germany. The community members share everything they want to achieve and share the knowledge, experience, and resources that they need to do so. As if symbolizing it, the interiors of this building are all actually made by the members’ hands.

According to Scott, modern society is permeated by the “Domination Paradigm,” which is required to stand above others, is pervasive, but a society that always creates winners and losers resulting in an unbalanced feeling. It is said that this community and its mission is to build a society of balanced environment, or “Balance Paradigm,” in which there is no way to break away from it and create only a part of the winner. Scott moved from New York to Berlin, perhaps because he was too exhausted by the focus of capitalism in the United States.

In this place, many people share their knowledge. They have a workshop to solve their problems. However, he said that he would not do a design thinking session. Karen says that this is not about learning methods, but rather about solving real human problems. Sessions like design thinking are good at giving you ideas on how to solve problems but don’t really include them until the execution phase. She said she wanted to focus on the value of gathering at the Baumhaus, leaving the consequences of changing society.

The main source of income for the Baumhaus is space rental, talk sessions, and Scott’s industrial design consulting business. There is no fixed price for each service, and a separate price range is provided so that customers can choose. The mechanism in which operating funds are supported by customer feelings also symbolizes the “giving” spirit as the center of the community. By the way, they provide free support for groups without a budget and stick to a thorough attitude of helping each other. 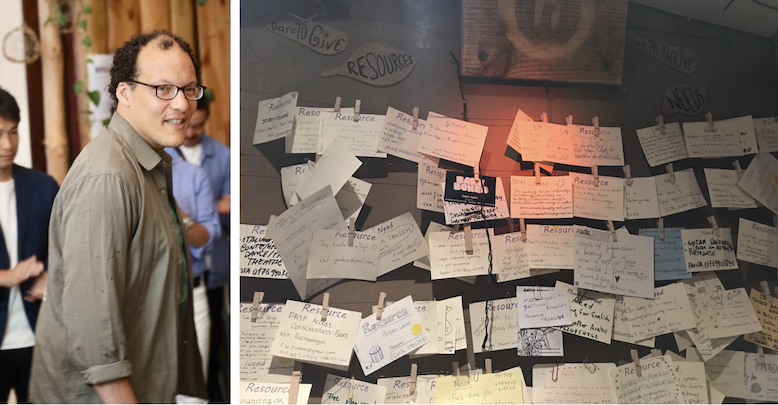 As shown in these examples, Berlin is already based on a pacifist-centered approach in which members return their knowledge and experience to the community.

Berlin’s history has had a considerable impact on Berliners’ perseverance to the extent that they are stubborn. They are committed to trying to build their own community and culture.

Historically, they were often swayed by political conditions, and they have a common understanding that “the government should not be completely trusted,” and that the minority opinion should be pursued if they think they are right. Therefore, the city can take such a positive and aggressive action against the government. In other words, there is an environment in which people who have an attitude to question existing things gather together and lead to innovation.

This is Berlin’s highly performing, innovative community. So what are the action guidelines and other tips that really matter? In the second part of the article, I will share the insights gained from the coverage of two co-working facilities that have a reputation for community strength among Berlin.