The secret of creating a community that supports the entrepreneurs in Berlin, Germany explored in two parts. In the first part, I explained the background of the citizens of Berlin, which emphasized the strong self-reliance to take action by themselves without relying on the government completely, and the ability to take action by putting it into practice rather than the ability to think of ideas.

In this part, we will explore interviews on two co-working communities in Berlin around the theme of “what kind of community formation will encourage learning and stimulation among its members.” Globally, I want to share what I’ve learned from Berlin’s knowledge and experience because, nowadays, co-working facilities with the theme of innovation and in-house co-creation spaces and communities have increased.

The following two are the co-working communities we interviewed this time. 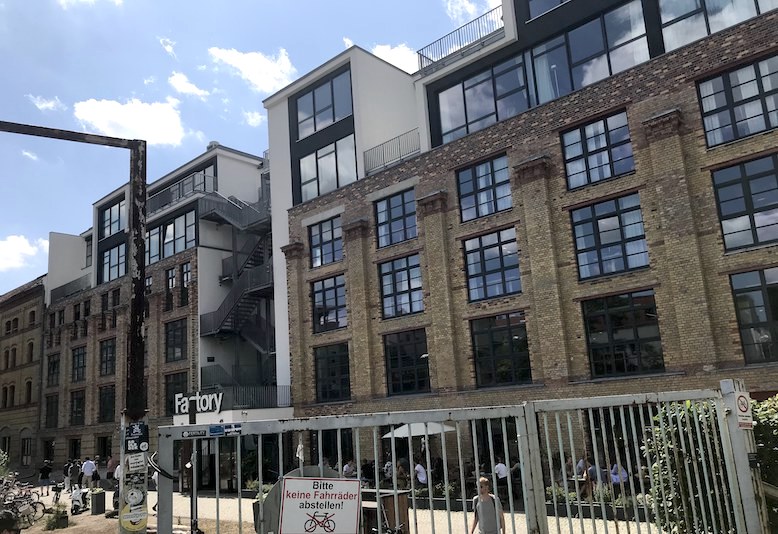 Factory Berlin is a co-working community that began with a local base in 2011. Although co-working spaces operated for about one to two years since their establishment, the advertisement of “COWORKING IS DEAD”, it emphasizes that it’s not just to provide co-working space but a “community” as well. Using 21,000 square meters of space in two locations, the Mitte district and Görlitzer Park, Factory has provided a comprehensive platform for them to manage the necessary inspiration and education of the community. They do this through an app that facilitates the collaboration of members both online and at events with workshops.

When screening prospective tenants, it’s well known that Factory Berlin asks the question, “What kind of contribution can you make toward the community?” This focus on community is key. Factory Berlin is known as a “community of learning, consisting of many different fields” and conducts strict screening for companies wishing to move in. Over 75 diverse countries in various industries, company sizes, and nationalities that have passed the screening process have formed a community of up to 3,000 members.

May of this year marked the launch of the Creative Code, a program that connects art, technology, and business across multiple disciplines to create new forms of creativity. Although Factory Berlin has been nurturing the innovative mind by cultivating the multi-angle perspective of its members, it will further focus on the realization of innovation through multiple fields.
We spoke with Mr. Martin Eyerer, chief innovation officer, from Factory Berlin for more insight.

Silicon Allee is also a community that started in 2011, but their origin differs from Factory Berlin. The two founders, Schuyler Deerman and Travis Todd, are both from the United States. Silicon Allee is a community-based idea set to be the Berlin version of the ecosystem the creators experienced within the San Francisco Bay Area startup ecosystem.

In fact, the physical space “campus” that is the symbol of the community was actually created in 2016, five years after the establishment of the community. With its co-working space, café, and living environment at the center of Berlin, the campus is about 8,000 meters per square meters over six floors where entrepreneurs grow their communities through clothing, food, housing, and work.

Currently, they are not only running co-working spaces and holding regular events, but they are also publishing magazines that summarize the latest information on startups in Berlin. Like Factory Berlin, it has a reputation for its international and active startup community.

We spoke with one of Silicon Allee’s founders, Travis Todd. 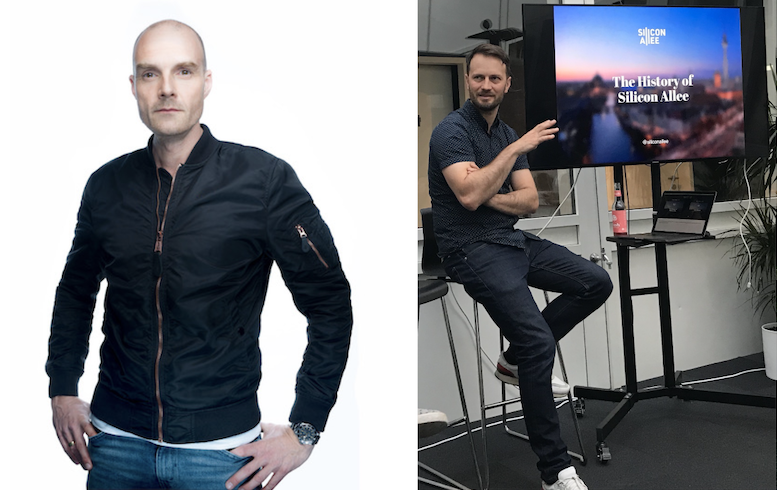 Silicon Allee added a symbiotic space-based community to Factory Berlin’s idea of shifting a “co-creation space to community.” What is the essence of creating a community that spontaneously innovates that we can learn from two contrasting communities? When listening to them during each interview, some hints came to light.

The Physical Space Is Indispensable

First, when I asked if there was a need for physical space in today’s world where people can connect and work online, the opinion of the interviewees overlapped on the idea that “space is an important element in community building.”

“Digital communication is not replacing personal face-to-face interaction and collaboration,” says Factory Berlin’s Eyerer. He says he believes in physical interaction and campus presence, especially when building a community. Although they are not driven by the place where they work, the environment in which they work together appears to be one of the key elements for creativity and innovation.

Todd also supports Eyerer’s opinion, “Human hardware has not evolved in 10,000 years to match the digital hardware,” he says. “We still thrive best with real world interactions. Simple as that.”

Other than Sharing Space: Community Manner

A collaborative space is valuable as a symbol of the community, but it is only a place where people with a particular interest and purpose gather. What else is necessary in addition to having physical space?

In the case of Factory Berlin, the code of conduct required of tenant companies, or “manners,” seems to be the key to the community. According to Eyerer, “Being part of a community means working together in a more binding manner than co-working spaces allow since they mainly provide a desk, but no interactive or co-creative environment.” This means that people are working together with an intention to contribute to their companies.

At Factory Berlin, it is clear that the common manner of members is a thorough “share and give” attitude, what can be provided to the community, and what can be returned. Being able to see this attitude is the key to building mutual trust among tenant companies, leading to the formation of a valuable community.

The reason why Factory Berlin is so committed to “contribution” is that they are founded on the idea that innovation pursued as a community is born by changing the way things are viewed. Factory Berlin hold around 600 workshops and events annually. By proposing different views and contributing to breaking established concepts, a culture of “rethinking and creating issues from a different perspective” is fostered. This disciplined “share and give” spirit increases the value of these events and leads to new awareness.

Finding a variety of members who make up the community that can make large changes to quality is like finding hay in a haystack. In fact, Eyerer says that the hardest part of community building is turning away select members, even from truly interesting companies. Recently, the selection process of tenant companies has been adjusted, and artists and musicians have been added to the community, so it seems that people who were rejected are now welcome.

“Curation does not mean being exclusive. It means to select and bring matching people together.” The reason that the Factory Berlin community differs so greatly from other co-working spaces’ community lies with the selection of tenant companies. People from other industries with different perspectives can collaborate in a visible manner based on the value of “contribution.”

Community Strength is Proportional to the Number of Common Interests

Compared to Factory Berlin where community cohesion is strengthened through manners and attitudes, Silicon Allee’s Todd says that the number of common interests and challenges symbolizes the strength of the community.

The Silicon Allee community is about aligning interests and challenges and exploring how it can be shared with more members. Even though members were born in different countries, there are many overlapping issues dealing with human resources such as how to do business in their native language, problems with working visas, homesickness, etc. Todd believes the sheer number of these common grievances is directly linked to the community’s strength.

In the end, can it be said that Todd is simply bringing the community building method based on the concept of Silicon Valley’s way of creating a community by tackling common challenges that are global to Berlin? When I asked Todd honestly, he replied that it was not.

He says that every city has a unique cultural value, and that Berlin is the same. Indeed, the independence of the people of Berlin, which I spoke about in the first part, is stronger than that of the United States. In fact, Todd, like Scott who operated Das Baumhaus, emphasized the importance that more community members should be together on the same topic. It is also important for an active community to prevent the domination paradigm of whether an individual’s thoughts should be given priority from occurring.

When the Voluntary Community Was Born

Eyerer believes that true innovation emerges from “interdisciplinary exchange and cross-disciplinary collaboration.” Regardless of having a multi-faceted perspective or having a common problem, there is a limit to how many people can mix together by simply saying, “Let’s collaborate.” If you have a lot of physical space, it is important to make sure that collaboration occurs. To that end, the voluntary attitude of members is indispensable, and a mechanism to inspire it is necessary. In pursuit of innate community manners and the presence of members who can put it into action, I feel the strong message from the two community owners that such a community will function for the first time.

In fact, at Factory Berlin, it is said that the members’ spontaneous contributions gave birth to their clubs and groups. For example, members who are interested in the IoT field gather and talk with each other. The original role as a community owner is to nurture the community until such a spontaneously born community is produced and support it from the shadows. It will take years to build a community so far, but if you see voluntary activities between members, it is a success indicator of good community activities.

After having interviewed two people, when operating the community, I learned that the members should clearly ask for something that they can contribute as a community member. If people with a certain common problem or interest gather, it can be called a community, but a community that is worth entering for a member needs a unique mechanism.

Eyerer and Todd showed us a new side of Germany. The next time I ask two different people what a community should entail, what kind of response will they give? I would like to confirm the opinions of the two who are proving to be leading forces innovation.