I want to continue working my whole life: Companies seek the opinions of women to recruit more female students

In the Gender Gap Index released by the World Economic Forum in December 2018, Japan ranked 110th among 149 countries. When looking at the rankings of other participating G7 countries compared to Japan (with France at 12th, Germany at 14th, Britain at 15th, Canada at 16th, America at 51st, and Italy at 70th), it is remarkably clear that Japan sits very low. In terms of “Economic Activity Participation/Equal Opportunity”, Japan ranks even lower than its overall ranking at 117, highlighting the low use of women in companies. However, there are some parts of society that are feeling a change as more women enter the workforce.

For example, in 2007 when I started to work for my second company, maternity and childcare leave were offered to full-time employees. Contract employees were not actually covered. But over the course of my employment, many contract employees were able to take maternity and childcare leave. Eventually, it became a merit of the company ー there were women managers with children, which was rare at the time. It was great movement I feel proud of even today. However, such a feeling also seems to have been a small story in a very small part of the world when looking at the rankings above.

In a working climate such as this, what do female students on the brink of entering society think about the meaning of “work”, and what kinds of choices are they planning to make. Based on the interviews with four female students, this article will explore important points for companies who plan to utilize more female workers through these women’s view of work.

First and foremost, the idea “give birth and retire” is not an option

All the women we heard from are committed to the stance of “continue working for life.” However, the degree of this lifelong work differs depending on the person. First of all, I would like to point out that careers and life plans vary from person to person. In the past, those who “had no children” was the minority group. However, in this interview those who said they “want to have children” and those who said they “have never thought of having children” was split half and half. Additionally, the desired working style between the two people who answered that they “want to have children” are quite different. The premise that “women who give birth will retire or reduce their workload” seem to no longer be the common way of thought.

For example, Ms. A, who wants to have three children, said, “I would like to continue trying challenging tasks even while raising children.” In a previous article, in the case of women with children, there were companies where female employees were transferred from the front-line jobs to the operations department. From her point of view, it was a “big deal” – this assumed idea that women do not want to do a less burdensome job just because they have children. In the future, Ms. A hopes to be in a management position and to take on the work of a leader.

On the other hand, Ms. C wants to give priority to raising children if she has them. Performance during that period will fall, but even if your assessment goes down for such an important reason, that should be okay. On the other hand, she said even if her performance falls, she would not like to be evaluated with the thought of something like “You are raising a child” as a factor. Merely because she wants to receive value/evaluation solely on performance, she stated,”To be valued simply for being a woman or devalued because they are child rearing, I think those kinds of things are unfair.” For others, having children is not the only or most natural choice of action. Ms. B said, “When I meet a good person and the timing is right, I’ll think about it. When I get to the age where having children becomes difficult, I think I won’t have kids.”

Ms. D does not want to have a child at this time either. Rather than having a child, she would like to give priority to “achieving what she wants to do through work.”

“If your assumptions change,” she stated, “your thoughts may change again.”

Choose a company that has a role model

The other day my friend, who is a young female writer, said something that left an impression on me. When she, who usually works in the United States, attended a tech conference held in Japan, she saw that all 60 speakers were men. “I thought it was impossible to work in Japan,” she remarked. There were no female speakers, whether by “happenstance” or by intention, but the message she received was clear ー it was “a place where women can not play an active part.” The choice itself had been removed.

This is the same for students as well. For women who plan to continue working throughout their lives, “the existence of role models” is a major factor when choosing their first job. Being close to other female employees with similar thoughts and knowing how they work has a major impact on their choices giving them a concrete image of their future.

Therefore, if you as the employer can not find a role model employee while a candidate is in the internship or selection process, the company will be excluded from the candidate’s list of potential employers.

When Ms. A was studying abroad in China, she was an intern at a local subsidiary of a Japanese company, but after the internship she dropped the company from her employment choices. The reason: there were no women employed in at the location. Even when she asked for introduction to any other female employee, they replied, “There is no one who we can introduce because the case even having female employees is rare.” Originally she specialized in Sino-Japanese relations at university and wanted to work in China in the future because she could speak Chinese, but she changed the whole direction of her career once she discovered the reality.

Ms. B also was one that removed the company from her employment choices after the internship ended. Although many women are active in the company, only the men in her intern team happened to find a role model. She was originally interested in the company, and there were many things she learned through the internship, but it seemed that she could not draw an image of herself working there. 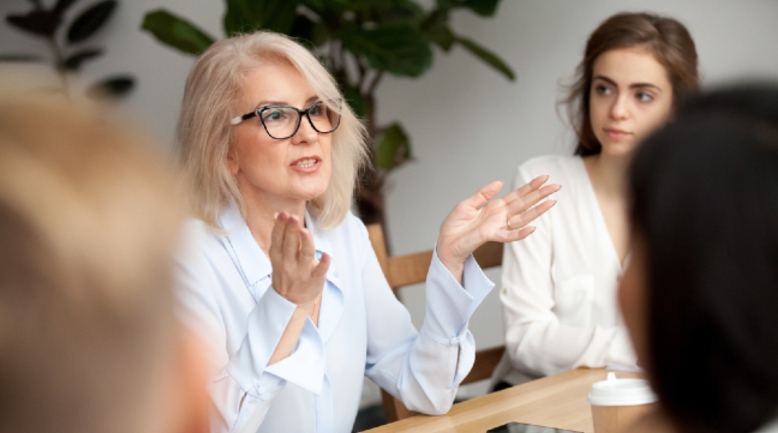 Ms. C, who is currently preparing for job hunting season, is searching for “company name/fame” and “comfortable work environment for women” as her criteria, and is researching how women work in each of the companies she is interested in applying. “Companies that have many employees who take maternity leave and then eventually quit have been excluded from my list of possible companies. Because I intend to take maternity leave and childcare leave, I want women employees who have had that same experience to be there.”

On the other hand, Ms. D said, “The gender of the role model does not matter.” For her, there is almost no difference in the use of men and women in the company that she is interested in, and there are many female managers with children. Therefore, she does not need to look at a role model’s work just “because it is a woman,” she stated. An employee’s work methods and skills are the only thing necessary to find a good role model. In this way, it would be more ideal to not be conscious of the gender of a role model.

Choose a company that recognizes diverse ways of working

In a sense, it is easy to say “women’s ways of working” as a general thing, but in reality it’s a gathering of diverse individuals. There are many things that determine how women work, such as the situation in the home, the presence or absence of a partner, the work situation of the partner and their ability (or willingness) to take care of the housework, the number of children and their health status, the presence or absence of a care recipient, etc. There are many elements that comprise the way of working. It cannot be one simple pattern. Of course the same holds true for some men, but the interviewees point out that there are still many women who tend to be largely influenced by family duties.

“I want to choose a company with a variety of options regarding various different working styles,” said Ms. C. She wants to choose from a company that has things such as freedom in working hours and places, companies that have a flexible system such as switching full-time to part-time according to personal circumstances or allowing employees to choose to lower performance and salary when they can not work full-time. In order for the system to be put to practical use, a culture that allows employees to work in diverse ways is essential.

In addition to the contents of work at the company that Ms. A is currently deciding on, she is looking for a company where there is a flexible working time and a system which, if you cannot work full-time, allows you to decide the income and range of work annually. Although the content of work is important, these types of logistics have equally become a decisive factor.

Moreover, some of the interviewees say that performance is easier to display with flexible working styles, regardless of the home situation. Both Ms. B and Ms. D believe in “work-life integration” over “work-life balance”. It is the idea that if you cannot concentrate in the office, you should be able to work on other unrelated things; at the same time you should also have the liberty to work outside of the office. Both women are hoping to work at companies with this style of working culture.

The conversation led to the impressive opinion that “female utilization” does not mean “female preferential treatment.” For example, Ms. C said setting a goal just to simply meet the “female management ratio” is unfair for men. Ms. D said, “Based on the fact that men take paternity leave, we’ll see whether men can exercise their rights equally with women.” What these women want is the “evaluation of men and women in performance equality” in the truest sense of the words.

These women are thinking about what they need in their careers and life plans, and looking at companies with an extremely critical eye to see if their goals can be achieved. They judge “fairness” at all points of possible contact with companies, such as internships, briefing sessions, company websites and interviews. It’s important to look at all of these points to consider whether or not they can envision themselves working at each company.

If they find companies that stereotype women, or if they are insensitive to the gender balance of their employees when they interact with outsiders including students, or if they view “female utilization” as “female preferential treatment”, these women and many other good female student candidates just like them are more inclined to drop the company from their potential employment options.