The low remote work adoption rate among SMEs in Japan

In Japan, remote work has been encouraged for some time as one of the initiatives to promote ‘work style reform,’ the rethinking of a workplace that accommodates a variety of work styles. Furthermore, under the declaration of the state of emergency in response to COVID-19, the Japanese government asked companies in targeted areas to work towards reducing the number of in-office workers by 70%. As a result, large companies have increasingly adopted remote work, but the rate of remote work among small and medium-sized companies remains low.

In this article, we will focus on different industries and company sizes where the implementation rate is particularly low, and introduce best practices in small and medium-sized companies.

The smaller the company, the lower the remote work rate in Japan

According to the Annual Economic and Fiscal Report for FY 2020 released by the Cabinet Office, as of April 2020 the remote working adoption rate decreases as the company size decreases. The adoption rate for companies with 10,000 or more employees is 43%, while the rate for companies with 10 to 100 employees is 16.6%, less than half of total workers.

The report also summarizes the remote work adoption rates by region and by industry. Regionally, the adoption rate is high in the 23 wards of Tokyo and the Tokyo metropolitan area (Tokyo, Kanagawa, Saitama, and Chiba prefectures) at over 50%, while the rate is low in rural areas at around 30%. By industry, except for the medical/welfare/childcare sector, which mainly requires face-to-face communication, 17.1% of respondents in the agriculture/forestry/fishery sector, 20.1% in the retail sector, 33.3% in the service sector, and 35.2% in the construction sector had the lowest implementation rates.

In September and October 2020, the Tokyo Chamber of Commerce and Industry (TCCI) conducted a survey of their member companies in Tokyo’s 23 wards. It also showed that the remote work adoption rate increases with the size of the workforce, and that it is lower in the construction and retail industries.

More than half of Japanese companies that have implemented remote work feel that it is effective.

According to the “2020 White Paper on Small and Medium Enterprises” published by Japan’s Small and Medium Enterprise Agency, 56.5% of companies with capital of less than 10 million yen, and 74.0% of companies with capital of between 10 and 30 million yen, answered that remote work is “very effective” or “somewhat effective.” Although the survey was conducted at the end of September 2018 and does not include the impact of COVID-19, more than half of the Japanese companies surveyed felt that the implementation of a remote working system was effective.

Among the companies with capital of less than 10 million yen, there were no responses that remote work had a “negative effect” or “not much effect.” More than 40% of the respondents answered that they are “unsure about the effects.” As the adoption period was not factored in, we can only speculate but it is likely that many of the companies that had only just introduced a remote work system had not yet been able to grasp its effects.

Although the attention tends to be on the outcome of the efforts to prevent COVID-19, these results suggest that the adoption of remote work in Japanese companies has had other effects as well.

There are many successful cases of remote work adoption even among small and medium-sized Japanese companies in the agriculture/forestry/fishery, retail, service, and construction industries, where the remote work adoption rate is relatively low. The following are some of the most notable examples.

TOPRIVER has two lettuce farms in Nagano Prefecture and is working toward efficient farm management. About 10 years ago, the company gradually established a remote work system, providing all employees with laptops. About three years ago, it also started using cloud services.

Employees use smartphones to clock in and out, and use GPS to share their clocking locations. They also enter sales and order data using mobile devices and smartphones, which are centrally managed and shared to improve operational efficiency, helping the company go paperless.

Since the pandemic, meetings between the two farms, which used to be held face-to-face, are now being held online more frequently. Also, by shifting meetings and training sessions with external partners online, employees have been able to reduce work and travel time. The company also encourages employees to work from home when commuting is likely to be difficult due to snowfall.

WORK SMILE LABO started out as a stationery store selling brushes and ink in Okayama Prefecture in 1911, and later shifted its main business to selling office supplies, office furniture, and office automation equipment.

When raising young children, there are times when there is no choice but to take a leave of absence due to unforeseen circumstances like illness. When this happens, the one taking time off may be concerned about inconveniencing their coworkers, while the employee doing the work on their behalf is frustrated with the amount of added work. WORK SMILE LABO thought remote work might be a solution to this problem, and initially introduced it for one-off situations.

As a result, it became apparent that the company could avoid absences, and employees could also concentrate on their work and increase productivity. Other employees also shifted from office workers to shift workers, and after a year, the company established a company-wide system.

Specific measures that were introduced include providing computers to all employees, centralizing information on a shared server, enhancing security, and providing remote access. For labor management, it put in place a system that allows employees to clock in and out and share clocking location information using their smartphones, and migrated its attendance data to the cloud. The company uses web conferencing for communication, set up monitors for constant connection with remote workers, and introduced new rules and evaluation systems.

The remote work system has not only reduced overtime work by more than 40%, but has also increased sales, gross profit, and productivity. In September 2018, the company opened a shared satellite office, “WORK SMILE SATELLITE,” in front of JR Okayama Station to provide a workplace that leverages the remote working lifestyle. 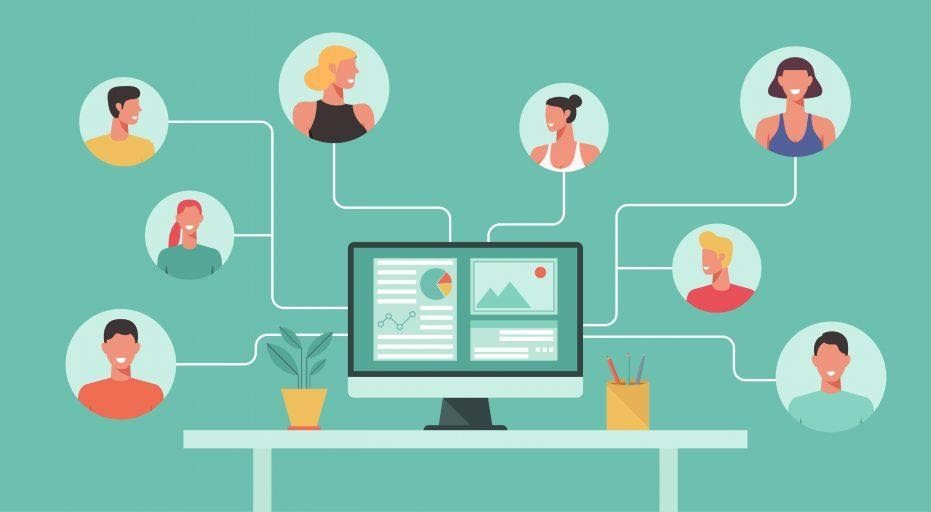 They use cloud-based collaboration tools to enhance security, and have thorough measures such as two-step authentication when using such tools. Employees communicate with their customers online, and if necessary, provide training on how to operate the tools.

The combination of a flexible work system and remote work has created an environment where employees can continue to work despite childcare and other obligations. This has had a tremendous effect on their recruitment efforts and has also led to improved business performance. In March 2020, the company opened a satellite office in Yatsushiro-shi in Kumamoto Prefecture, and has been recruiting people there as well.

Okabe, located in Toyama Prefecture on the coast of the Sea of Japan, does civil engineering and construction as well as the design and construction of playground equipment for public facilities, nursery schools, and kindergartens. The purpose of implementing remote work was to help balance work with childcare and nursing care, as well as to prepare a business continuity plan (BCP) for emergencies. As a manufacturer of playground equipment, they also wanted to contribute to efforts to reverse the declining birthrate, so in 2010 they institutionalized remote work for those on maternity leave.

To systemize it, the company developed software that enables information sharing, including blueprints, via cloud-based groupware. It also created software that allows employees to create reports on their smartphones. It has established an environment that allows remote working at field offices and lodging facilities where inspections are necessary. Since the pandemic, the remote work adoption rate reached 100%, excluding executives and engineers in charge of the construction sites.

This corporate stance has led to the recruitment of younger employees, and as of 2018, employees in their teens and twenties account for 30% of the total workforce. Thus, the company has seen the benefits of remote work, which include increased productivity and lower turnover rate.

In the case studies introduced in this article, the remote work system was often triggered by the reconsideration of the work styles of certain groups of employees. However, once leaders became aware of the benefits, it was expanded to the whole company. This also tracks with the aforementioned “White Paper on Small and Medium Enterprises,” which showed that more than half of Japanese companies that have introduced remote work feel that it is effective.

In November and December 2020, the Ministry of Land, Infrastructure, Transport and Tourism conducted a survey titled the “Remote Work Population Survey.” Among domestic workers (40,000 sample size), about 64% of the respondents were satisfied with remote work overall, and about 82% said they would like to continue to implement remote work in the future. In addition, a survey of Japanese workers in their twenties conducted by a job-transfer information website showed that having a remote work system increases the level of interest in a new job, suggesting that the introduction of such a system is highly effective in recruiting and preventing turnover.

The company case studies shared in this article are of those that have taken the time to introduce and establish a remote work system before 2020. But due to the pandemic, the number of companies adopting remote work is increasing in Japan. New tools are helping to enable a smoother transition, such as the Ministry of Health, Labor and Welfare’s Telework Consultation Center that allows individuals to consult with specialists on remote work.

There is still a tendency in Japanese society as a whole to have reservations about remote work, and the adoption rate has not increased as much as expected. However, there are many precedents showing that it is possible for even small and medium-sized companies to adopt remote work. It will take a lot of trial and error to make it take root as part of the general corporate culture, but we hope flexible work styles will spread throughout Japanese society as companies continue to work to make it a reality.