Three cases of Japanese businesses working towards the SDGs

What is the term “SDGs,” which is often used in Japan?

In Japan, the term “SDGs” has increasingly been seen in corporate advertisements and promotions since 2018. It is often used to describe environmentally friendly initiatives, but it is actually an abbreviation for Sustainable Development Goals. It was first introduced at the UN Sustainable Development Summit, held in September 2015 at their Headquarters in New York, and broadly refers to the global goals set to be achieved within 15 years, from 2016 to 2030.

The world was greatly shaken by the effects of the pandemic in the year 2020, but it was also a year that marked 10 years until the deadline of the SDGs. So, to what extent are the SDGs being addressed in Japan today? Before introducing some examples from Japan, let’s first review the basics of these SDGs.

The specifics of the SDGs are outlined in the 2030 Agenda for Sustainable Development, a set of 17 goals and 169 targets aimed at ending poverty and spurring action to build a more sustainable world by 2030. It focuses on three elements: economic growth, social inclusion, and environmental protection. 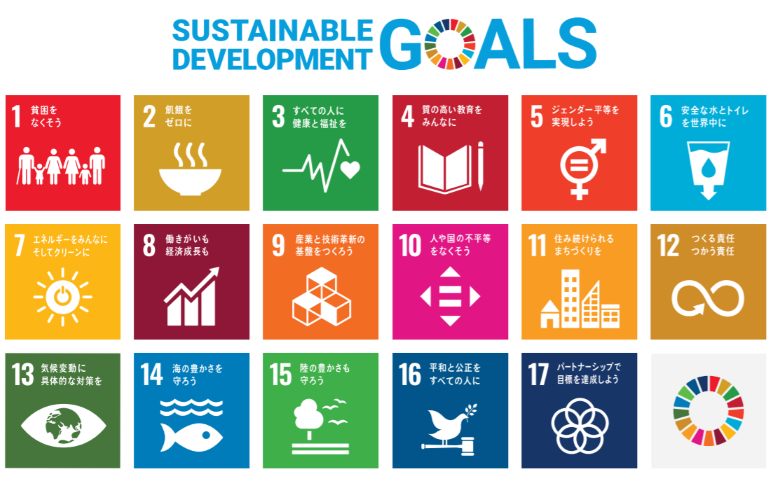 Apart from the integration of the economy, society, and environment, what makes the SDGs groundbreaking is the “universality of the goals, which apply to all countries,” the “need for a cross-sectoral approach,” and the “emphasis on global partnerships,” according to the 2017 White Paper on the Environment, the Sound Material-Cycle Society, and Biodiversity, published by Japan’s Ministry of the Environment.

As many as 193 UN member states have agreed to the SDGs, and support is growing around the world, partly due to the push from the UN High Level Political Forum (HLPF), which regularly monitors the numerical targets.

About half of Japanese companies are aware of the SDGs, but have not yet adopted them

With the familiarization of the SDGs, the notion of “do what you can for the world and for the betterment of people’s lives” is becoming a global standard in the corporate world. For this reason, the number of Japanese companies that connect corporate social responsibility (CSR) with SDGs has been increasing.

For example, Starbucks Coffee Japan began phasing out the use of plastic straws in January 2020, and implemented the use of paper straws in all of its approximately 1,500 stores throughout Japan in March of that year. The company made headlines when it announced that this change would lead to a reduction of about 200 million plastic straws per year.

On the other hand, according to a survey conducted in June 2020 by Japan’s largest corporate credit research company, Teikoku Databank, which targeted 23,681 companies in Japan (11,275 valid responses), only 8% of companies “understand the meaning and importance of and are working on” SDGs. In addition, 16.4% of companies “understand the meaning or importance of the SDGs and want to work on them,” bringing the total to 24.4%, or about one in four companies that are proactive about SDGs. Nearly half of the remaining companies are aware of the SDGs, but have not taken action.

According to the Sustainable Development Report 2020, Japan ranks 17th in the world in achieving the SDGs. The report shows that Japan has achieved Goal 4 (Quality education); Goal 9 (Industry, innovation and infrastructure); and Goal 16 (Peace, justice and strong institutions). However, Goal 5 (Gender equality); Goal 13 (Climate action); Goal 14 (Life below water); Goal 15 (Life on land); and Goal 17 (Partnerships for the goals) and many others remain to be addressed, indicating that Japanese society is lagging behind in its efforts.

As part of CSR, it is important that companies develop initiatives that support the SDGs, or work to combat other issues like poverty in developing countries. However, there may be many companies that feel that the SDGs are too grandiose a goal and don’t know where to start.

In the aforementioned survey, when asked which of the 17 goals of the SDGs they were focusing on, 15.9% of companies chose Goal 7 (Affordable and clean energy), 27.1% chose Goal 8 (Decent work and economic growth), a goal which is already attracting attention from the ongoing work style reforms. Below are some examples of companies that are addressing the SDGs, mainly from the environment aspect of Goal 7.

Daiwa House Group, a large housing manufacturer in Japan, is working on net-zero energy housing, construction, and urban development in order to realize a decarbonized society and be more energy efficient. This incorporates 3 of the SDGs: Goal 7 (Affordable and clean energy); Goal 11 (Sustainable cities and communities); and Goal 12 (Responsible consumption and production).

This approach can also be seen in the company’s own offices. At the Daiwa House Saga Building in Saga Prefecture, a test to prove the self-sufficiency of renewable electricity has been underway since February 2018.

The building was designed to be an “environmentally-friendly office,” and by implementing energy-saving measures such as natural ventilation, an air-conditioning system that uses groundwater and solar heat, and lighting that utilizes natural light, the building has succeeded in reducing electricity consumption by 52% compared to buildings that meet the 2016 Energy Conservation Standards.

The standards are set by Japan’s Ministry of Land, Infrastructure, Transport and Tourism (MLIT) for energy-saving performance in buildings based on criteria such as heat insulation, solar shielding, and primary energy consumption. In addition, the building aims to be energy-self-sufficient through the implementation of an “energy independence system” that connects the solar power generation system with storage batteries.

In November 2018, the building received the MLIT Award at the 1st EcoPro Awards, organized by the Japan Environmental Management Association for Industry, in recognition of these efforts. The building’s model of a self-sufficient office is expected to be deployed not only in Japan, but also in developing countries that face issues around the distribution of electricity.

Ishizaka Sangyo, located in Miyoshi-cho in Saitama Prefecture, is an industrial waste treatment company with a corporate slogan, “Live beautifully with nature.” It has reduced/recycled their waste by 98%, and is known as a company that is applying initiatives unprecedented in the industry.

For example, they established an all-weather resource recycling plant that is environmentally friendly in terms of electricity and CO2 reduction, and set up a company building with separate facilities from the plant. In addition to Goal 9 (Industry, innovation and infrastructure), these initiatives are also related to Goal 12 (Responsible consumption and production) and Goal 15 (Life on land).

On the company’s grounds, which is about four times the size of one of Tokyo’s largest stadiums, Tokyo Dome, there are facilities such as Kunugi Forest, which has a variety of flora and fauna, the company’s own farm called the Ishizaka Organic Farm, and Kunugi Forest Exchange Plaza, where people can use food to get a feel for the environment and local production. The entire area is called “Santome Konjaku-mura” and is open to the public. It is also called a “sustainable field” due to the preserved grassland’s symbiotic relationship with nature and the community.

Santome Konjaku-mura is not only a place for relaxation, but is also an educational place where visitors can get inspiration on how to create a sustainable society. At the same time, it has become a workplace for the company’s employees, where they can refresh both physically and mentally in the rich natural environment.

This is a good example of how an office that incorporates the natural environment can lead to comfortable working conditions for employees while also contributing to society, embodying Goal 8 (Decent work and economic growth).

parkERs, a brand of Park Corporation, does interior design and indoor greening. Under the mission of “bringing the comfort of a park to everyday life,” the company designs spaces where people can spend time surrounded by elements found in parks, such as flowers, greenery, trees, and water. 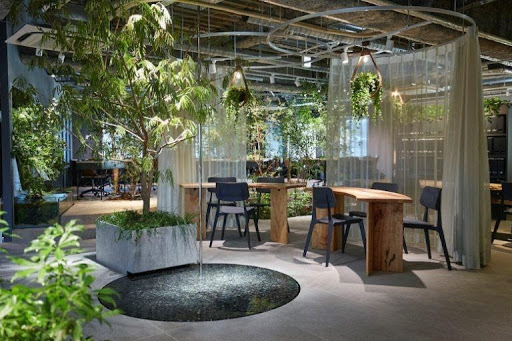 The company’s office, which represents this mission, is filled with many plants. The office also incorporates the SDGs in various ways. For example, the wood chips in the area called Outdoor Park are made from thinned wood from Hinohara Village, a mountainous area in Tokyo. In addition, the flooring in the area called Forest Park utilizes “tataki,” a traditional Japanese natural flooring technique. These efforts are connected to Goal 12 (Responsible consumption and production) and Goal 15 (Life on land).

Many Japanese companies need to work on the SDGs

In this article, we introduced some examples of the environmental SDGs that Japanese companies are working on. Given the three components of the SDGs– economy, society, and environment– it would of course be better if they crossed over rather than being focused on the environmental aspect alone. However, in the three companies’ cases, environmental considerations also led to improved working conditions and company profits, and were developed in line with their respective slogans and missions.

Since the success of the SDGs depends on comprehensive company involvement, not just a few departments, going forward it is essential that companies set objectives and share them with all employees.