On October 29, WORKTECH was held in the third-largest US city, San Francisco. As explained in a recent report on events in Los Angeles and New York, WORKTECH is a workplace-related conference held in more than 20 cities around the world, but its contents vary widely in the cities where it is held. The conference was held in San Francisco, a city of technology and innovation, and was attended by a number of Silicon Valley office workers from dozens of companies including tech giants like Google, Facebook, and Apple.

Here we will introduce some of the contents discussed at the event. The latest Office trend in the San Francisco Bay Area, which includes Silicon Valley, can be summed up in three points, officials said.

In the first session of the WORKTECH conference, Tim Clark, who leads the real estate team at Airbnb since March 2017, and Jeremy Kopstein, Senior Manager of workplace and real estate tech at Uber, discussed this in greater detail. It was a rare opportunity for the office representatives of two of the Bay Area’s most prominent start-up companies to talk about their in-house initiatives.

In their panel, the two emphasized the most important things in today’s office buildings are feedback data from pilot/test offices and employees. Kopstein insists that the era of designing offices based on the assumption of what users might like is over. Uber actively uses sensors in offices that he designed based on his hypothesis and regularly updates these offices while collecting data. On the other hand, the data obtained, such as enrollment rates and sensory information for conference rooms, constantly change and mishandling may become a factor that can hinder decision-making. Therefore, before using the data, be sure to figure out how to use it, and he added that it should be treated as “material that supports decisions.”

Meanwhile, Airbnb’s Clark takes a special approach in the Bay Area as the company has about ten in-house architects. They say that being part of the company’s design department and working in offices at all locations around the world has become a great benefit to accumulate insights from testing in-house. 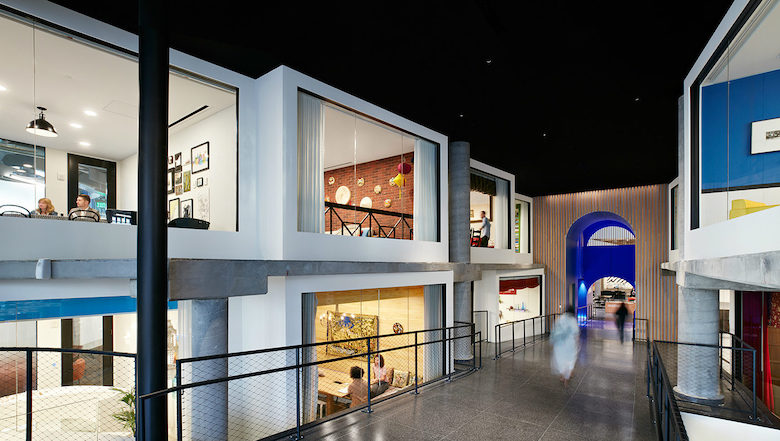 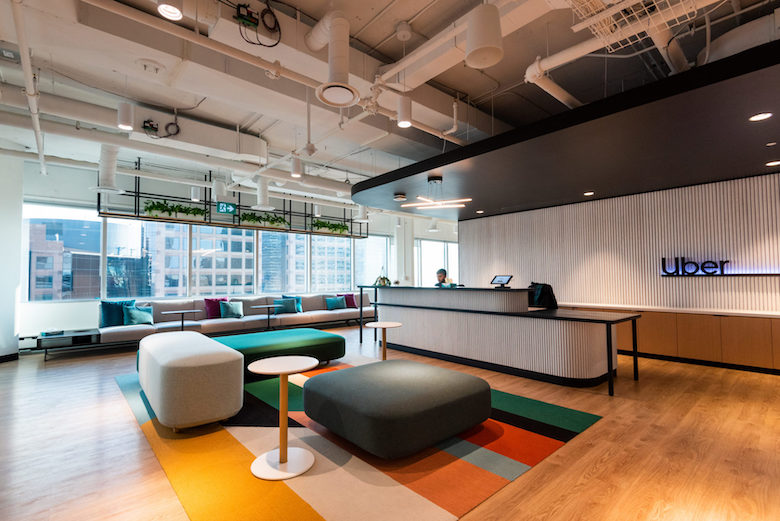 To Snap Back and to Endure: Resiliency Needed with a Testable Environment

In addition, it is necessary to have an environment that can be tested, as well as resilient that allows the space to be restored or re-created in the event that the test office does not function. Kopstein said the office environment he created for the test was often not working as expected. At that time, it is also necessary to allow enough duration to return to the original state without leaving it as it is in the altered test state.

This is especially true for fast-growing companies such as Airbnb. The organization/team envisioned during the stage planning of important matters may be completely different at the time of completion due to reasons such as an increase or replacement in personnel. The demand to become one of Silicon Valley’s fastest-growing companies is to maintain the degree of flexibility and resilience in the workspace while staying up to date with your companies most current status. 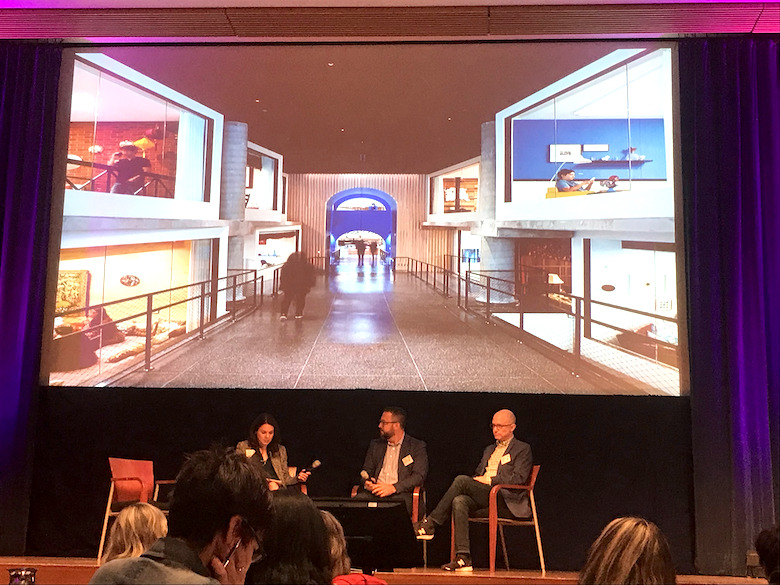 2. Use Storytelling to Sort Out History Like Nike And Mcdonald’s

When a company that has already established a brand gets a new start in the new office, the “people-oriented” or “human-centered” story behind its successful history is integrated into the office design and expresses a redefinition of the world view shown corporate brand.

In a session titled “When Giants Start Fresh,” members of Studio O+A, a renowned office design firm based in San Francisco and winners of the 2017 Cooper Hewitt Design Award, took to the stage. Brand Director Elizabeth Vereker and Design Director Mindi Weichman, the women behind the redesign of both Nike and McDonald’s offices that became a globally recognized office design case study had the chance to explain their approach themselves.

When a large company with an established brand renews its office, one of the ways to express its corporate philosophy and culture is to use its employee’s ingenuity and the historical background behind the company’s success. These things are often incorporated into designs. However, the two explained that “storytelling,” which allows others to feel the story of history, is key, as well as how to incorporate it.

This storytelling has the power to engage and wrap the audience in the story. In a different session, David Firth, who talked about storytelling in communication techniques, said that the presence of a story naturally allows listeners to understand what their role is in the story and to understand how the role played. In the office example, by incorporating a story into the history of the company, employees, and guests who visit feel like they contribute to the company. Almost to say, “We are in this office now because of these successes.”

To add further to Firth’s words, “knowledge” alone does not shake people when they want to communicate or appeal to employees. In other words, you can’t just rely on the traditional in-house branding that emphasizes the “stick the company logo everywhere” technique, but rather use a method of office design that utilizes a revived and retold story and history as its brand power like Studio O+A. 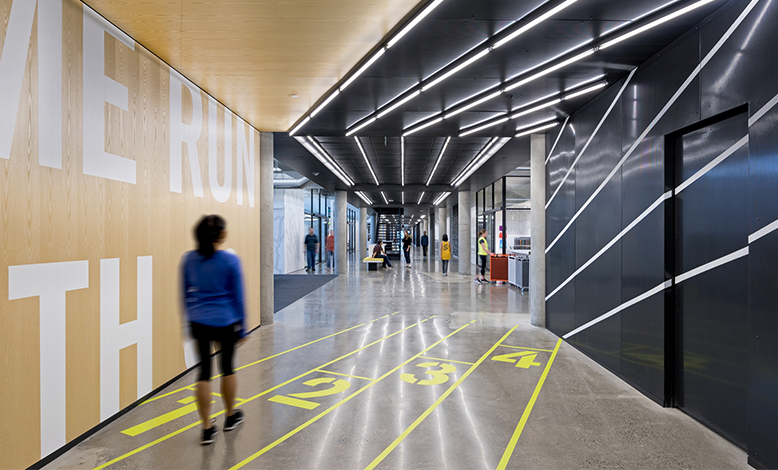 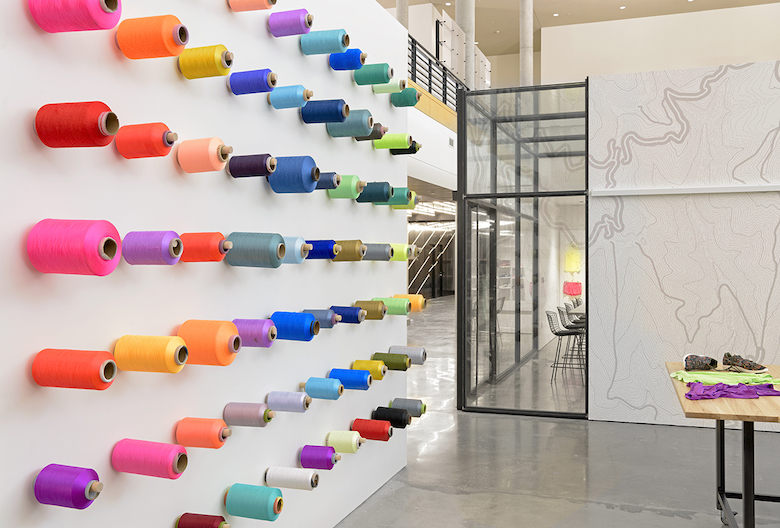 Completed in 2016, Nike’s office has been redesigned to reflect the brand and culture of the previous space where products were stocked. In order to represent the “people” focus of the Nike brand, they adopted athlete-conscious running courses and street art that expresses the sportiness of everyday people. Throughout the office, there are many photos that capture moments of success for athletes in various sports. It also projects the story and design methods that are at the heart of the Nike brand’s design into the office. 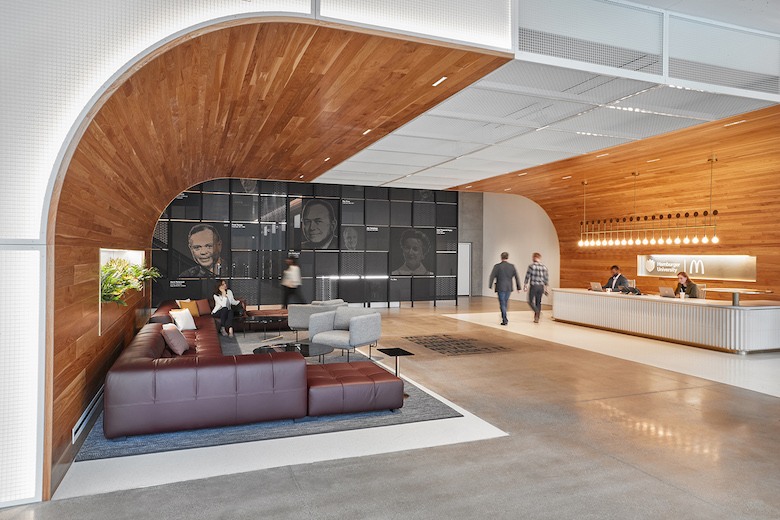 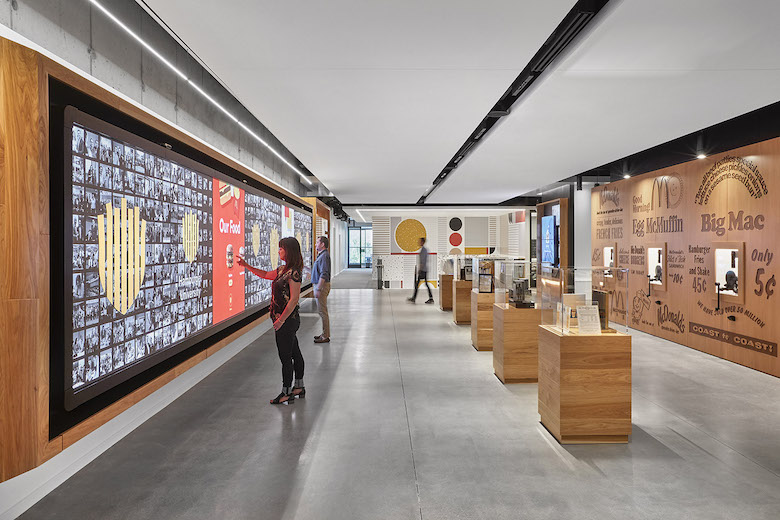 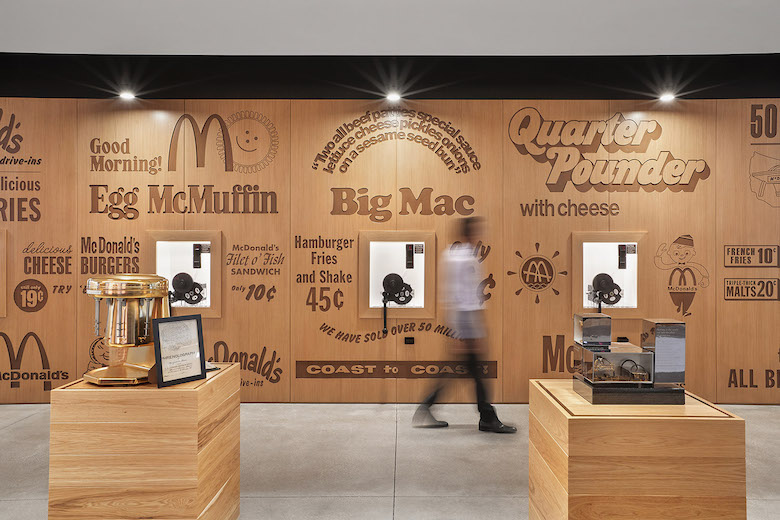 The McDonald’s office had previously been a private office for many years, lacking in the sense of fun and freshness. Studio O+A changed the office environment that was unsuitable for today’s work style and also blended the ideas of an employee and the history of the company that supported the company’s success in the details of the office, giving the new space a story.

Related articles: Primo Orpilla Interview #1: We speak to the Studio O+A co-founder about the starting points for West Coast design.

Work styles and office reforms are progressing in many industries, and some of them are becoming more visible. The technology industry is known as the industry that focuses on the office environment in order to win the fierce competition for IT talent, but other advanced professional industries such as consulting and law firms and industries that provide world-class customer service such as hotels have also come to be mentioned.

Aramark, a company that provides uniform rental and food provision services for facilities in the United States, and WORKTECH ACADEMY, a WORKTECH knowledge collection department, jointly published the first WorkXP Report that reports work styles and office trends mainly through human resource analysis. Visitors were given the report free of charge and were allowed to present their own analysis using the data. In a session inside WORKTECH, the authors picked up a particularly interesting point and added an explanation.

One of the analyses they performed was the degree of an office building by industry. One of the many sources we analyzed is the annual ranking of “Best Place to Work,” which is published by Linkedin, Glassdoor, and Fortune each year. 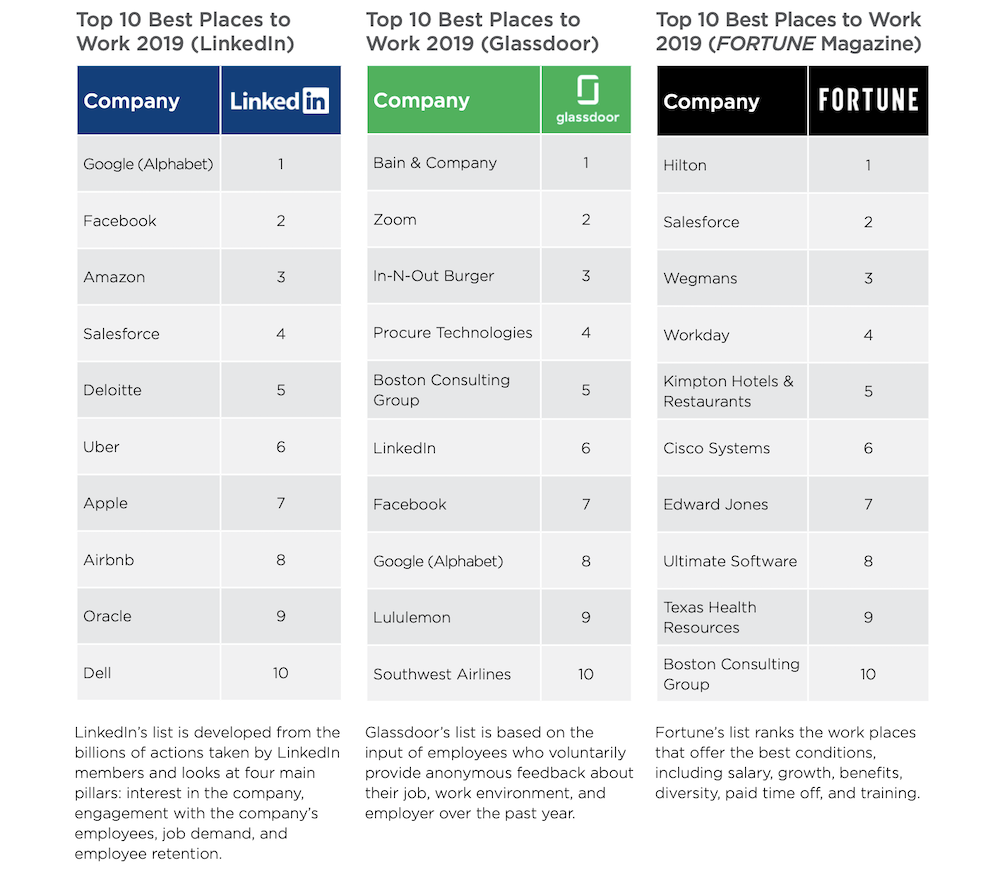 Each company was ranked differently, but it was confirmed that three industries were taking significant steps to improve workability. That’s the next three.

Unlike other industries, it is an industry that is remarkably easy to enter and work in. In the tech industry, where competition for talent is fierce, the creation of an innovative office environment continues. Apple’s new office building, Apple Park, which was completed in Cupertino, Google’s new campus that opened in Mountain View, and Willow Park promoted by Facebook, are setting new standards for offices. Companies such as Salesforce, Airbnb, and Uber, which have plenty of cash, have urban offices in San Francisco and have generous benefits programs.

The hotel, retail, and aviation industries, which offer high customer experiences every day, are good at picking up user needs from their daily duties and are good at providing their employees with many choices, conveniences, and advanced services. In particular, these industries are accustomed to using the latest technologies, such as sensors, to improve their services on a daily basis by looking at sales data and so on, so they can utilize their know-how in the office environment as well. In addition, these companies also have close proximity to their customers, so their understanding of human resource diversity and their commitment to diversity and inclusion is a point that has earned the support of many employees.

The names of Southwest Airlines in the aviation industry, Lululemon in the sportswear retail sector, and Hilton in the hotel industry are all examples of this.

In highly specialized industries such as law firms and consultancies, competition between competitors is fierce, and the tendency to strongly demand employees who can respond appropriately to customers is conspicuous. As in the technology industry, competition for human resources is intense, and it is not uncommon for competitors to move around. As a result, many companies are trying to communicate their value and purpose to employees through office design. In addition, because the work is highly stressful, most companies have established a work environment to improve the treatment of employees in addition to salary increases. Companies like the Boston Consulting Group and Deloitte are actively offering employees flexible work programs and more.

Based on these characteristics, the chart below shows the US domestic industry divided into seven layers according to the level of workability. “TIER 7” is a group of industries that invest the most in office environment and benefits, including technology companies and social media companies. “TIER 1” is a collection of industries that have not yet been able to make sufficient investments, such as governments, administrative agencies, and the public sector. On the left side, the industries and investments corresponding to each tier are shown, while the benefits and office services provided are listed on the right. It’s interesting to note how much you should invest in the industry when considering your office environment. 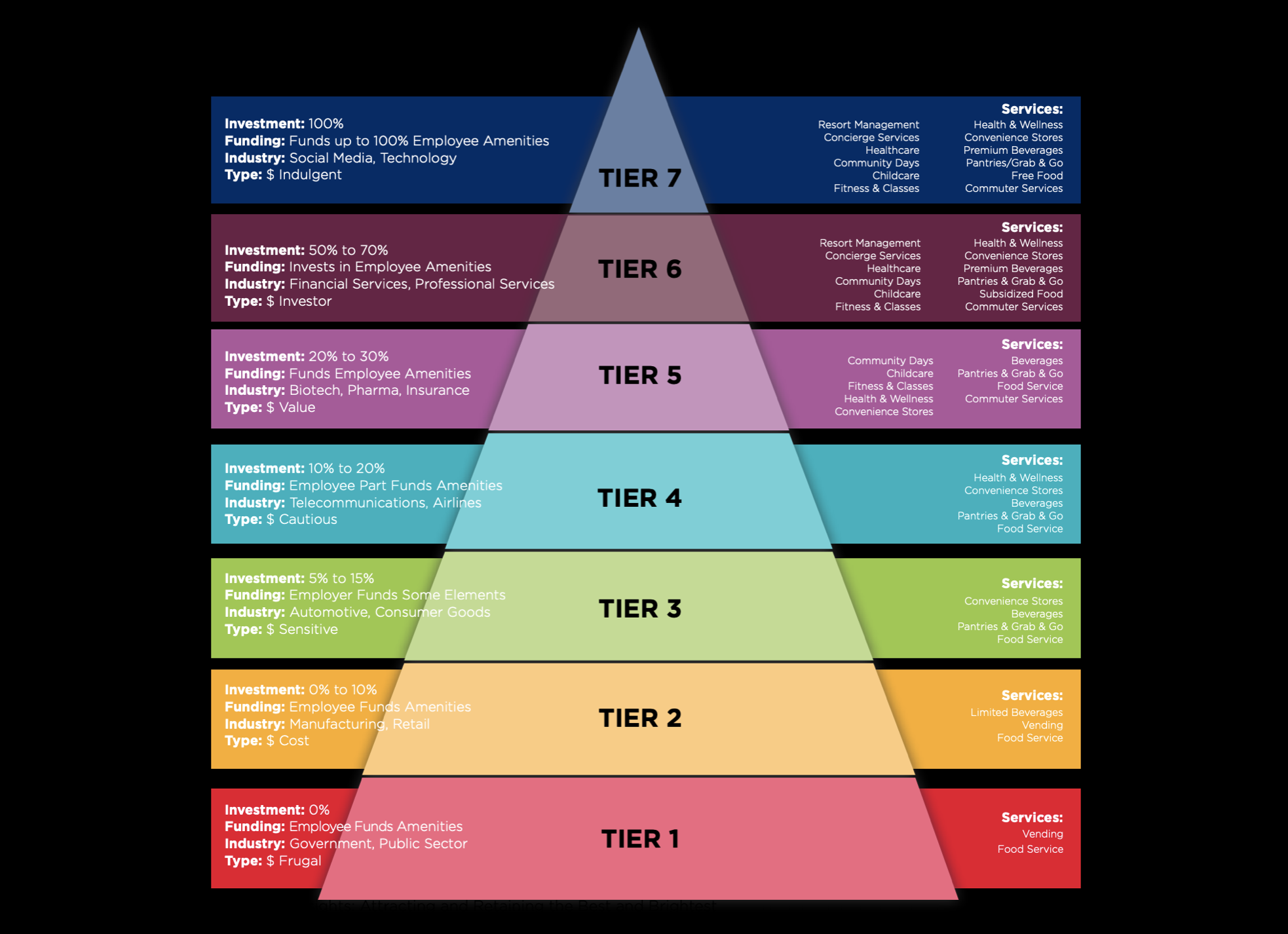 Of course, these three points were only a glimpse of what was discussed at the event. Talks were also expanded on a wide range of other fields related to offices and working styles, such as “neuroarchitecture,” which studies the effects of space on people, and how to use technology in offices. Worker’s Resort will continue to actively distribute more domestic and international information and events.

Please contact us from this form if you have any information that you would like to take up.