In recent years, many corporations have aspired to realize workspaces that will stimulate in-house communication with a range of co-working spaces providing rooms and communities aimed at co-creation. On September 13, JINS Inc. announced its new Think Lab Project for creating workspaces that are uniquely focused on concentration (due to open on December 1 at Iidabashi Grand Bloom 29F). In cooperation with its partner corporations, Think Lab will provide environment and services that are suited to concentration.

In collaboration with partner corporations, universities, and experts, JINS is exploring the potential beyond glasses including the JINS MEME, which was announced as a symbolic project in 2015. By combining glasses with technology, the JINS MEME is able to analyze blinks, eye movement, and body movement, and is now used in a wide range of fields from monitoring working styles to hobbies, sports, and fitness.

Revealed by technology: The truth is that we can’t concentrate at the office

If someone talks to you when you are concentrating on work, it takes 23 minutes to return to the same state of concentration, but in the office, something happens once every eleven minutes to interfere with concentration. (Related article: Save yourself from noise!! Office furniture that creates concentration) 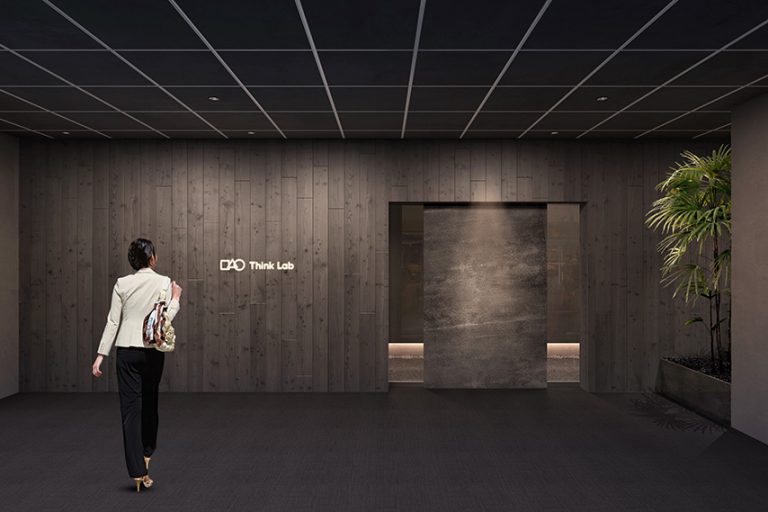 Architect Sosuke Fujimoto is responsible for the spatial design. The Think Lab entrance is an impression of a torii gate. 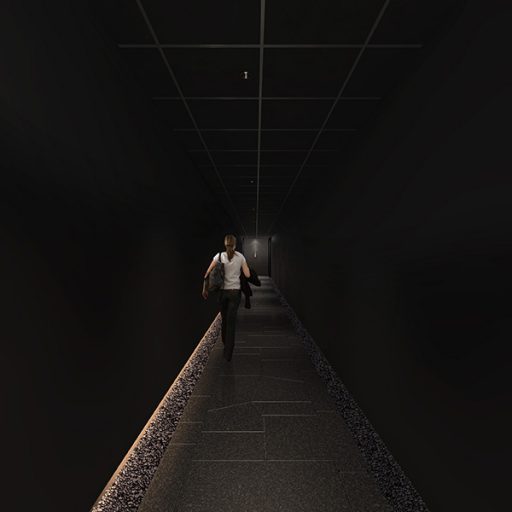 The passage leading into the office, corresponding to shrine approaches, is set with stone to increase concentration.

Coming out of the passage, you are in an open “garden.” The photograph shows the scenery looking down from the garden

The states of concentration as defined by JINS

To start with, let’s look at how JINS thinks about concentration. Earlier, Mr. Inoue said something very interesting. “It is thought that people can concentrate for four hours in a day so it is important to figure out how to distribute this time to match work priorities.” The optimum time slots in a day for concentration also differ from person to person at the genetic level. “If you survey four people with roughly the same working style, it is interesting that Ms. A loses her concentration around 3 pm while Mr. B doesn’t make any progress before noon.” It is clear from these statements how the JINS MEME can be used for the scientific analysis of concentration.

JINS has defined the following three states as enhancing concentration 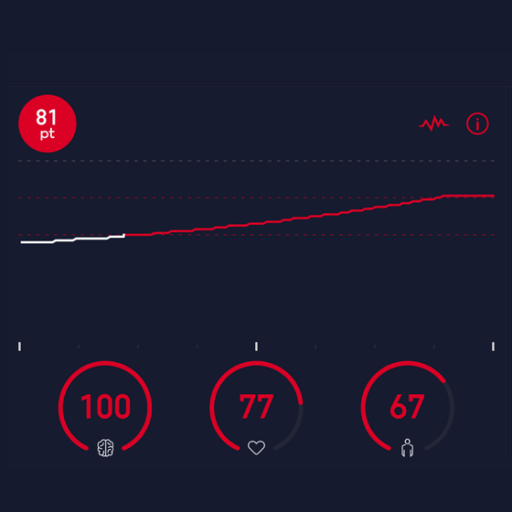 Recent research has verified that it is not possible to work simultaneously on two complex problems that require processing in the brain. In short, the key to enhancing productivity is not to think about two things at the same time, but to figure out how to immerse oneself in one problem. The JINS MEME measures blinks and postures to visualize the state of concentration based on the three points listed above. Normally, people blink about twenty times in one minute, but this is reduced to three or four times when they are concentrating on something. The force of the blinking also stabilizes the more relaxed and calm you are.

To sum up, you would be right in thinking that the Think Lab is a space for realizing “concentration (immersion), relaxation (calm), and stable posture.”

A modern Mt. Koya in Tokyo 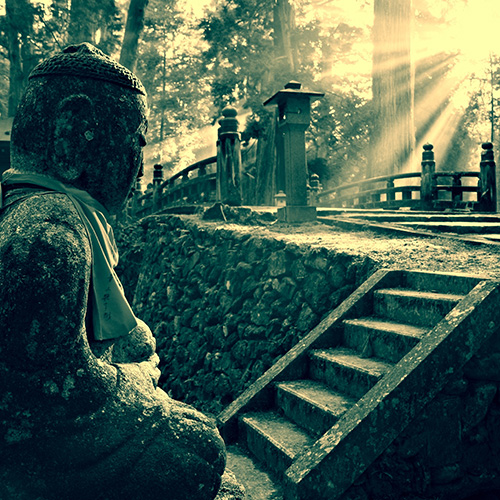 The roots of the Think Lab concept are in shrines and temples. According to Yoshiki Ishikawa, researcher in preventive medicine who supervised the project concept, the balance between “looking for knowledge” and “deepening knowledge” is important for innovation. We look for knowledge when we encounter different people and deepen communication. When we deepen knowledge, we generate new knowledge by looking within ourselves and reflecting on the information we obtained from our search. The monk Kukai is a source of inspiration that guided Ishikawa to a space dedicated to the deepening of knowledge.

“Some twelve hundred years ago, Kukai traveled to China in search of knowledge. As a result of information overload, Kukai then relocated from the city to Mt. Koya where he deepened his knowledge.” So, Ishikawa’s idea was that a modern Mt. Koya in Tokyo is something that the overloaded modern society is searching for. Thinking carefully about the structure of the shrine and temple environment that is so well suited to the Japanese, it seemed to make sense that such a structure would lead to a state of intensive concentration. He got the idea for the structure when he thought about how the flow from the torii gate to the honden main shrine is a kind of warm-up exercise for concentration.

JINS also runs the JINS MEME Zen Mindfulness program, which is one of the projects that use the JINS MEME. The instructor on the program, Zenryu Kawakami, deputy head priest at Shunkoin Temple in Kyoto, made the following point in a discussion with Mr. Ishikawa. “At first glance, you would think that Silicon Valley has creative and wonderful office environments, but why do their people then go to the trouble of traveling alone to Japan to visit our shrines and temples in order to find concentration and consolidate their information?” So, Ishikawa thought that shrines and temples have some characteristic, found only there and nowhere else in the world, that deepens knowledge. This insight became another source of inspiration.

As I was listening, I thought to myself that there is perhaps a promise of more than concentration in this modern Mt. Koya.

It is a widely known fact that Steve Jobs was fascinated with Zen and that it had a strong influence on him. These days Zen is spreading to many corporations in the shape of mindfulness. It is very difficult to come up with a brief explanation of mindfulness, but in his book Stanford University Mindfulness Classroom, Stephen Murphy-Shigematsu, professor at Stanford University, describes mindfulness as self-exploration, questioning your own world view and the place where you find yourself while being awake to consciousness and living in harmony with the self and the world. *1

A more detailed explanation, pointing out the differences between Zen and mindfulness might make it easier to understand mindfulness.

(1) Religiosity: Zen is a school of Buddhism with religious attitudes and ideology, but mindfulness has no religious aspects, which is why people of different ethnicities and fields find it easy to engage with mindfulness.

In his book Bijinesu Zen Nyumon (Introduction to Business Zen), Daiko Matsuyama, deputy head priest at Taizo-in at the Rinzai School Myoshinji Temple, says, “I believe that the Gautama Buddha attained enlightenment. If we do the same things that the Gautama Buddha did, we may find some enlightenment. I don’t know if I can achieve it, but I thought I would believe it and try it out for the time being. Such is the Buddhist faith.”*2 Practicing seated medication is one of the actions of the Buddha. In mindfulness, on the other hand, meditation is practiced in pursuit of clear goals and real impact such as lowering stress or improving concentration. It is easier to understand if you think of meditation as something you do to improve the health of the mind, as you would exercise to improve the health of the body. I recommend the references listed at the end of this article to anyone with an interest in mindfulness.

Based on mindfulness, the Search Inside Yourself (SIY) training program created by Chade-Meng Tan at Google has also been introduced at Facebook, Intel, Nike, and other corporations. In his book Search Inside Yourself: The Unexpected Path to Achieving Success, Happiness (and World Peace), Tan says that mindfulness trains two important skills. Attention and meta-attention. (…) Meta-attention is the ability to pay attention to your own attention. (…) When attention and meta-attention are both strong, interesting things happen. The mind gradually starts to focus and stabilize, but in a way that is relaxed.*3

I would like you to recall the JINS definition of the states of concentration mentioned earlier. The Think Lab has been designed to realize each state of concentration. So, is it not conceivable that the mentalities that Think Lab and meditation bring about are extremely close?

Originally, of course, the purposes of using the Think Lab and meditation were different, and I think there are also differences in awareness and the quality of the sought-for outcome. However, it is extremely interesting that there are common features in the mentalities produced. After all, the Think Lab project is built as a place to encourage concentration, but it is hardly odd to think that there is hidden potential to generate effects beyond concentration.

The impact of the Think Lab on the West Coast

JINS has opened another four stores on the West Coast since opening its flagship store in San Francisco in April 2015. JINS is providing new value in the United States where getting glasses has involved considerable expense and time.

The JINS store near Union Square in San Francisco. The photograph on the right shows the KANNA automatic lens processing system.

As the popularity of JINS increases, there is a high chance that West Coast corporations, who are engaged with mindfulness, will show interest in the JINS office structure. The day when the world will start paying attention to offices from our small island nation in the east might not be so far away.

*3 TAN, C-M. (2012). Search Inside Yourself: The Unexpected Path to Achieving Success, Happiness (and World Peace). HarperOne