Redefining Space and Design: The Office of Millennials

Actually, those between the ages of 23 and 38 in 2019 are all called millennials. Of course, their presence in the office has grown much larger to the point where it’s no longer rare for companies whose entire team and staff, including the managers, are all millennials. Many startups are founded and completely staffed by millennials.

With such a presence in the workforce, what are they looking for in the office? As teleworking and other forms of work become more widely recognized, what kinds of offices are easier for them to work with that seem to accommodate these new work styles? To create a think-tank on this theme, Worker’s Resort held a roundtable discussion with three companies handling office design: Plantec Group, Hitokara Media Inc., and Frontier Consulting.

Participants in the Roundtable

The first thing I heard about was the particular trait of millennials that they actually like to be a part of the office design in some way. Thus, many offices are based on that belief. The keyword they panel came up with was “ambiguity.”

First of all, as a feature of the millennials that we actually see, Aya Sai of Hitokara Media mentions their “obedience to desire.” Since they were born, millennials were surrounded by an abundance of things and had many choices, so it was natural and common to live by the idea of “choose something that suits you” in almost any situation.

“In other words, a company must send the message visually that they are the company to choose,” said Sai.

The options seem to be expanding, including traditional ones. Tomohiko Aoyagi of Plantec Group focuses on the fact that “every definition has been broken.” For example, about 15 years before he entered the industry, there was no “consultant” position in the construction and architecture industry. But this is now the norm.

New occupations emerge, and at the same time the traditional definitions of occupations change, and the definitions of work styles and workplaces are also changing. How to respond to them and redefine their values is important in creating an office today. 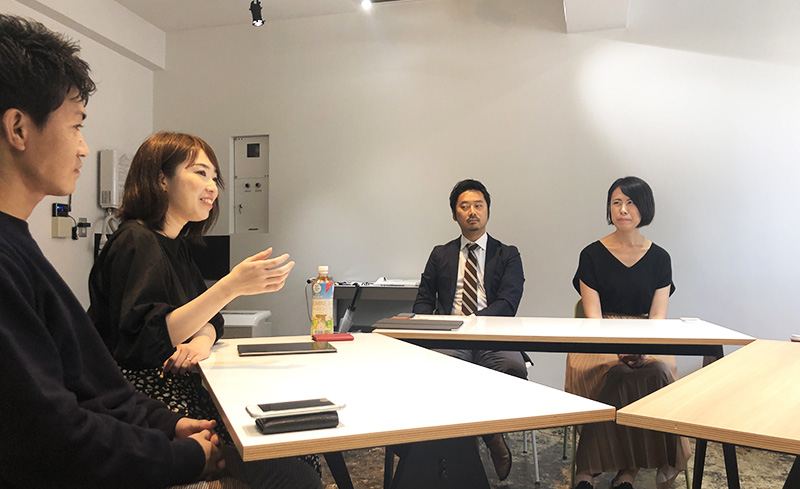 Similarly, Ryoji Hibiya of Hitokara Media also understands how to use the space without being bound by the conventional office space and company framework. Until now, the “spaces for meetings” and the “spaces for work” were clearly and strictly defined, but recently there has been a demand for more ambiguous and undefined places.

For example, it seems that the popular trend of creating a place in the office that connects the inside with the outside, like a traditional Japanese porch or “engawa,” is one of these demands.

What is Required to Make Use of “Ambiguity?”

We’ve heard so far there are no objections to cater to millennials’ ideals of choosing what suits them personally when it comes to working spaces. But is that really the case when it comes to actually working?

Particularly in the 2000s, when the first generation of millennials born in the 1980s became members of society, the definitions of “work” and “company” were stronger than they are now, and the perception of work and work environments as simply things “handed down by the company” was naturally shared. Can those who have started their careers in these times take advantage of “ambiguity?”

A System and Design Used Voluntarily Is Key

Japan may struggle with the concept of working in ambiguity. In response to the above question, Kazumasa Ikoma of Frontier Consulting, who is familiar with office trends on the west coast of the United States, points out, “It should be considered that there are few people in Japan who are accustomed to the style of working on their own.”

“[American] West coast offices tend to have more choices, like college campuses, but the premise is that work is something that you can do yourself. Perhaps because you have the initiative in your work, you have the consciousness that you can and should choose your own working environment. There is a big difference between people who have developed that kind of awareness in their career and those who have not.”

So what is needed to make use of these “ambiguous spaces” for people who have never experienced this work situation or had the chance to develop this awareness?

According to Kaori Kono of Plantec, what’s important is the “consciousness at the top.” Even if you make such a place, there are always perceptions of “slacking off” or “skipping out” for the employees who do use these spaces especially when managers are always trying to find the whereabouts of particular employees. So to avoid this, these spaces end up as decoration without being utilized after all.

The key to promoting the use of ambiguous spaces comes from the top management’s commitment and constant assurance that employees should be conscious and feel free to choose these spaces with peace of mind.

On the other hand, Mr. Aoyagi has a design that guides employees to choices well. “There are not many people in the world who are able to make voluntary spontaneous decisions. If you’re accustomed to things being “handed down [from above],” this is all the more so. Therefore, blurring the boundaries of the space and making it a less conscious choice will lead to smoother use of the space.” 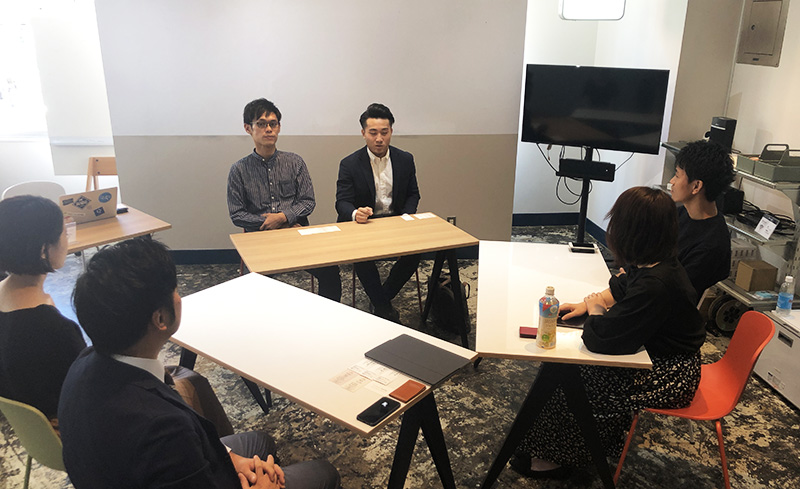 Offices Not Bound By Conventional Definitions

In sum, you need a design that is not bound to the definition of an office but is represented by ambiguity. Let’s take a look at some examples of what they have done.

JAL Innovation Lab is a case of the ultimate ambiguity for Ono at Frontier Consulting. The office created by Ono and his colleagues who discussed an “environment for innovation” seemed, at first glance, nothing but an empty space.

This, Ono says, is the result based on the following: “If there is some meaningful design in the space, the idea might be caught in it.” In other words, a specific design solidifies what employees should be doing there.

In order to protect the company’s commitment to safety standards, things like wiring and other items were arranged neatly and simplistically, thus creating an environment where ideas could be created that are free but do not deviate from the base. “In an office with an innovation system, things and priorities change day by day, so a superflex space might be the most convenient,” says Ono. 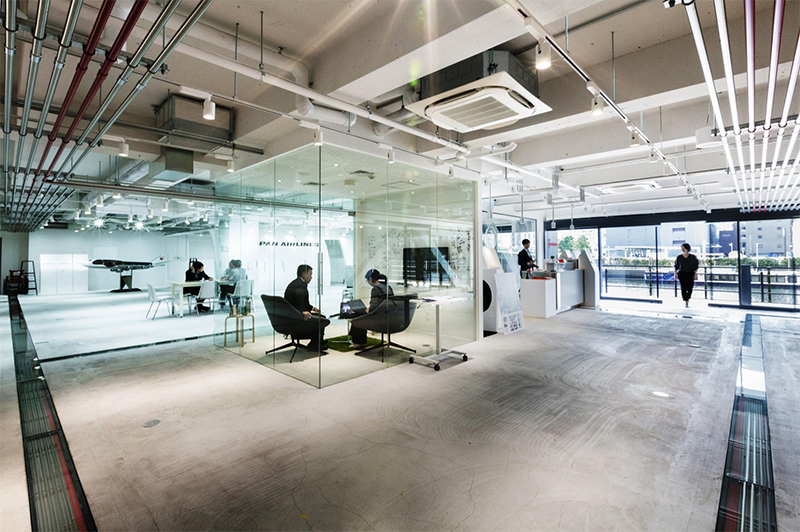 The motivation was a post on Facebook by a millennial engineer who stated that they wanted a place where engineers could connect and work freely. Having seen that, the development department lead issued the go-ahead, launching the so-called “Dejima” volunteer project, allowing the aforementioned engineer to take lead.

By the way, during Japan’s isolation period (1641-1854), Dejima was the name of the man-made island where the Dutch and other foreign people entered the country to freely connect and trade or exchange ideas and commerce.

The process is what we want to focus on here. Publishing all communication through Slack throughout the process created a sense of “everyone is making something.” According to Sai, who was involved in the design, “The interior changes every time I visit.” The space is always changing in accordance with the idea that they “do what they want to do.” Like the office of NEW STANDARD Co., Ltd., which we introduced previously, this is a successful case where the office has evolved from a “place supplied” to a “place to create what you want.” 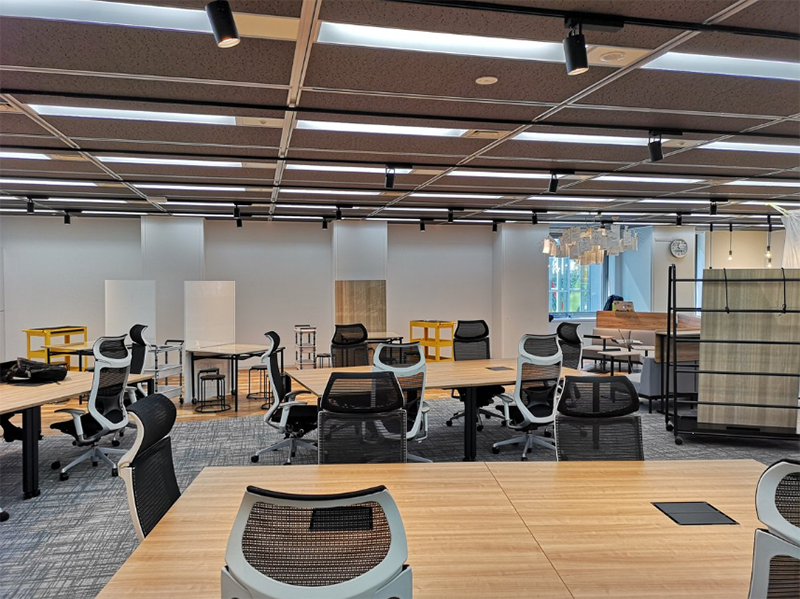 The Osaka Team’s Redefinition: The Office as a “Town”

In the Osaka branch of a company handled by Plantec, seven separate companies were based in one location, but there was no interaction between the companies because the floor was originally divided amongst them. The idea to combine them in one floorplan was raised, but it was evident that employees would be confused if they had no interaction before.

So Aoyagi created a redefinition of the space. Rather than an office, he redefined the space as a “town” with main streets, parks, cafes, etc. The visual definition of a “town” created a sense of community and encouraged exchange.

The Office Designer: From Designer to Accompanist

Offices are changed from “places supplied by by companies” to “objects to be used according to purpose.” In line with this trend, the role of office designers seems to be changing. Kono redefines it as a “role that triggers the creation of motivation.”

“We have design skills, but that’s just a means to the end. It’s our role to work with them to increase motivation to develop their business to even greater levels,” she says.

Sai agrees. “Especially for startups, which start with a condominium office, and as the size of the business grows, the size of the office grows. In this way, an emphasis on communication, speed, efficiency, etc. will change depending on the business scope. Rather than trying to complete a single office design, we need to be flexible and adaptable to the growth of a business, and we want to be there, side-by-side.”

Instead of being confined to the definition of a conventional office, continually review the space to project future business growth. And to that end, companies must find a companion, an accompanist if you will; not a designer.

These points may be the key to creating an office where millennials can flourish. 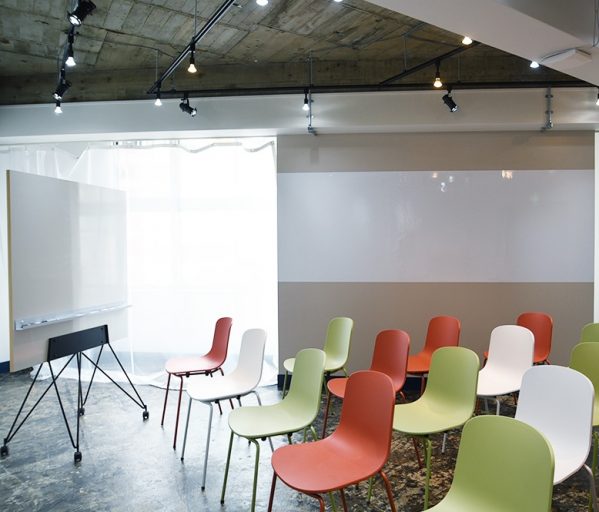 KICHi by WARP
A base for the future “Omoshiroi” provided by Hitokara Media. Zero deposit for start-ups-includes office space with interior decoration and 24-hour rental space. And it’s located in the electrifying Shinjuku district of Tokyo.https://letswarp.jp/kichi/ 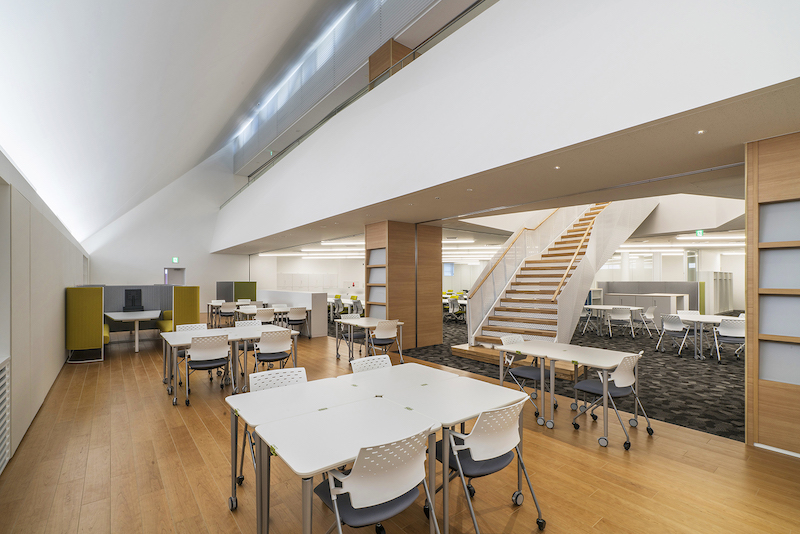 The work areas on the second and third floors are connected by a stairwell to ensure continuity between the upper and lower floors and to induce communication between departments. In this plan, employees and designers started an office environment committee aimed at creating a space where flexible working style and communication are naturally born. 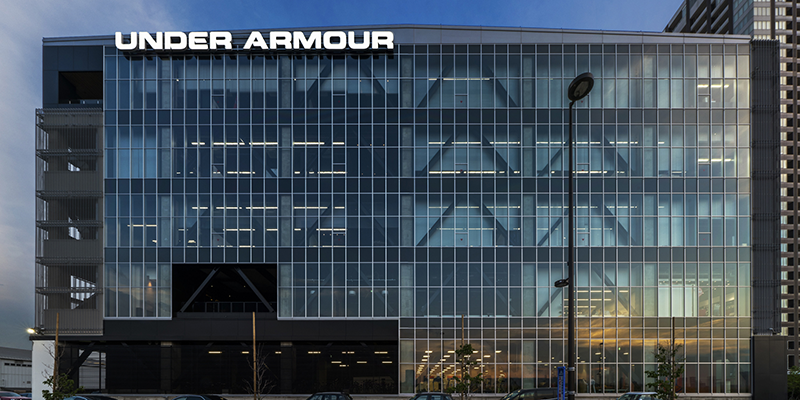 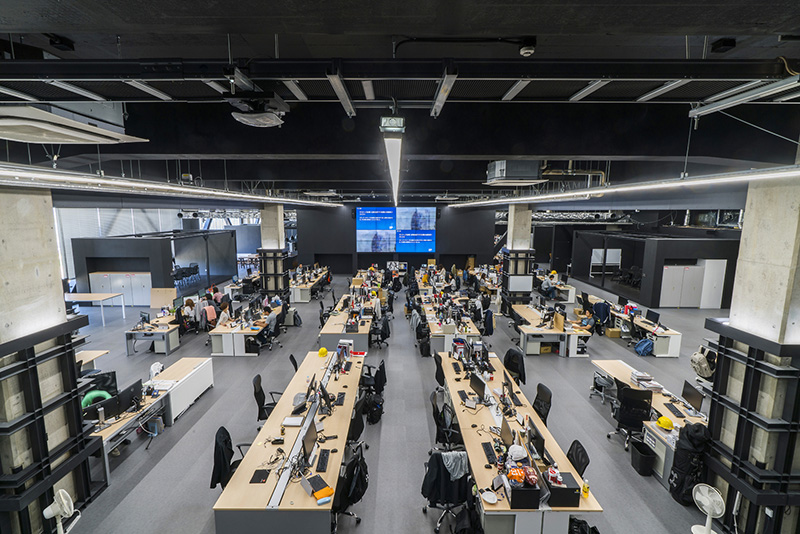 Under the theme of “cultivating a strong organization” and “work style reform,” a space was created to intentionally induce communication and business opportunities with the “Proactive Matrix,” a concept that creates organic connections within each project. From a warehouse to an office of conversation. 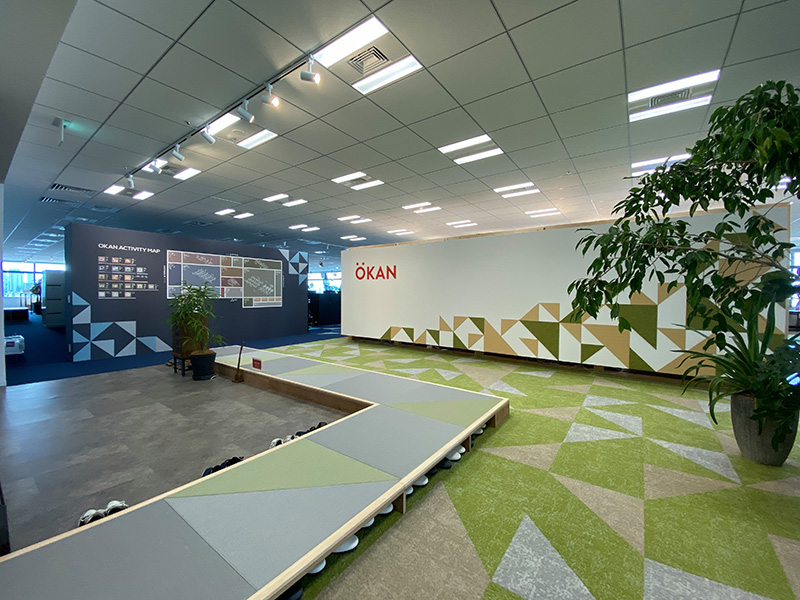 By changing seating and workplaces according to tasks, the design promotes improvements in productivity and revitalizes communication. In addition, the office features several mechanisms to stimulate the five senses such as the arrangement of plants and the installation of high-resolution natural sounds. 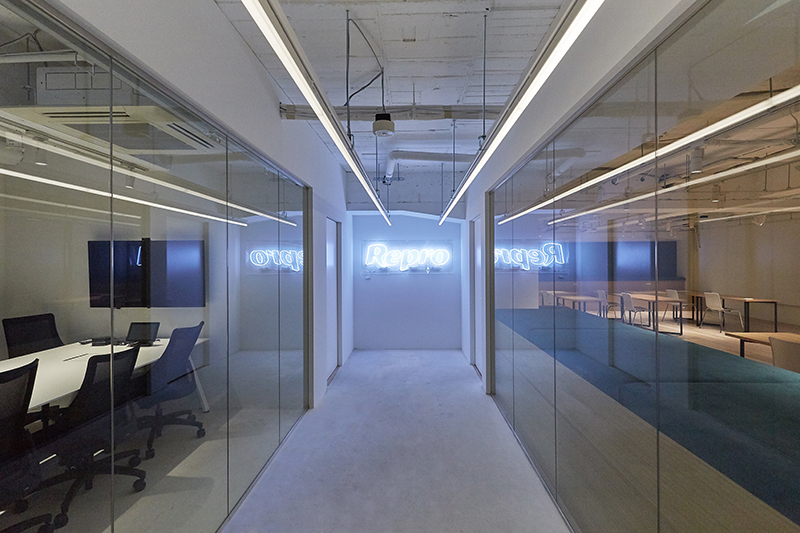 Repro Co., Ltd.: While the members of increasing diversity were committing to growth, they also had an implicit sense of crisis about the sense of unity within the company. The concept decided their workshop was “a workplace full of merriment.”

For their first office, they had a clear intention to design a space where their mission and vision could be fully experienced. 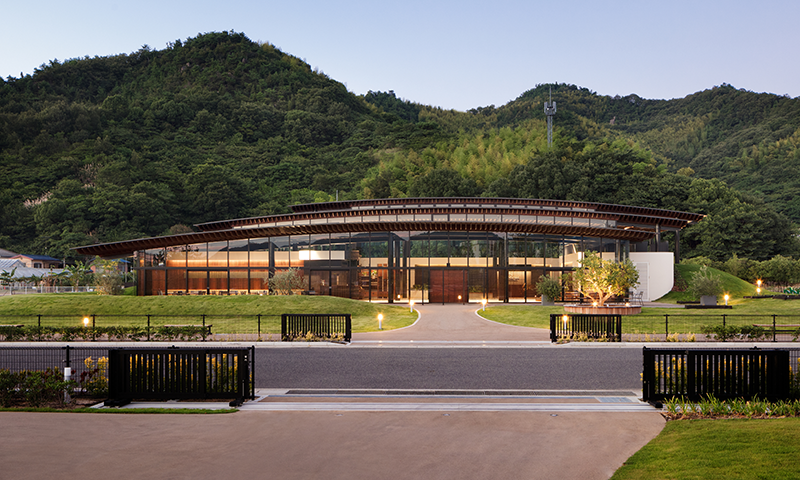 Manda Fermentation Co., Ltd.: HAKKO Park is a free admission theme park that opened in August 2018 for the purpose of enlightening the public on health and fermentation culture, corporate branding, and provides facilities for healing, learning and playing.

A grand design that takes full advantage of the grassy island terrain of Innoshima Island in southwest Japan. This is composed of three areas: a gate with an impressive arch-like three-tiered roof that mimics the folded islands of the Seto Inland Sea, a hall where you can observe the production and fermentation process of their Manda Koso (enzyme), and a garden where seasonal flowers are in full bloom on a vast site of over 10,000 square meters. 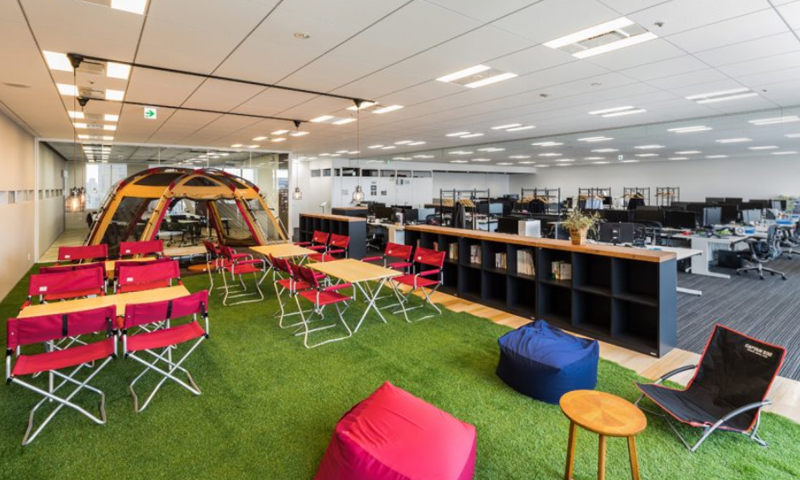 Quartet Communications Co., Ltd.: Creates “sophistication” based on white and “impact” in the dynamic space configuration including a 24m corridor. In the office area, there is a “camp space” that allows employees to work seriously and to relax seriously. 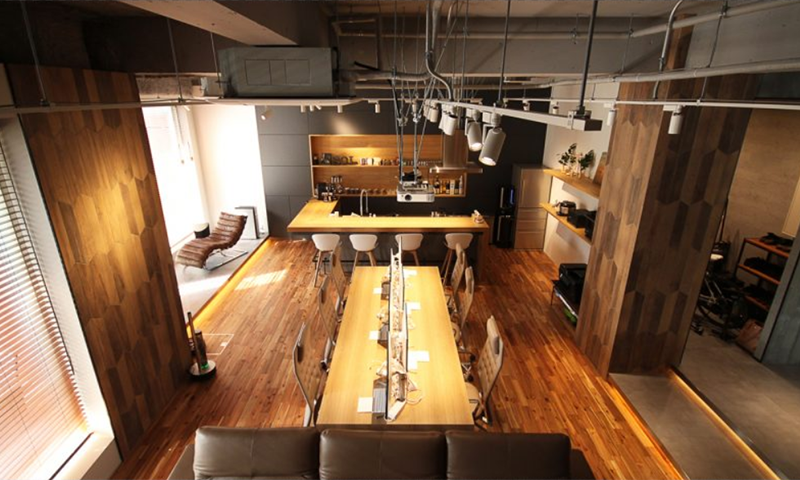 sol Co., Ltd.: Expressing completely different world views in the guest area and staff area. By providing a loft space and kitchen counter in the home living-room-style staff area, the workspace embodies the comfort of the company itself.