The Growing Use of Private Booths In Japan

As remote work takes root in Japan, online meetings and conversations with business partners, colleagues, and superiors are becoming more commonplace. However, this poses a new problem: they don’t have somewhere to hold these meetings. Below are some of the most common complaints:

・Meeting rooms are always full due to limited availability.
・Concerns about disturbing others in a quiet office space.
・If it’s a shared office space, it will pick up background noise.
・Others overhearing the conversation.

In many offices in Japan, desks are placed closely next to each other. In addition, the lack of partitions (simple partitions are now placed in some offices to prevent the spread of COVID-19) around desks is also part of the problem.

In a September 2020 survey of 821 office workers in their 20s to 60s conducted by Spacemarket Inc., which operates a rental space booking website in Japan, 24.5% of the 436 respondents answered that there was a lack of space for online meetings.

In addition, those who work from home are facing the same problem. PIAZZA Inc., a Japanese digital platform, and Mercuria Investment, a Japanese investment company, conducted a survey on remote work in August 2020.

Among the 924 respondents, about 40% said they do not have a dedicated space for remote work. In addition to working from their living or dining room, there are many people who seek a place to work outside the home. However, as open spaces such as cafes are noisy, it is easy to imagine that holding a meeting in any of these places would be difficult.

The Growing Need for Private Booths

Private booths are attracting attention as a solution to this problem. Private booths are compact, soundproof workspaces similar to telephone booths and some are even equipped with a power supply, internet connection, and air conditioning. In Japan, private booths are being used mainly in train stations and corridors, office building entrances, commercial facilities, and more recently, in offices.

Even if we look at the United States, private booths are in high demand. The reason behind this is the disadvantages of the open office model that many companies have adopted.

While the open office model makes it easier for employees to collaborate with each other, it also makes it more difficult for them to concentrate on their work since they cannot secure private space. There are also reports that face-to-face communication has decreased by 70% as a result of the shift from partitioned offices to open offices. In this regard, private booths are rapidly becoming popular in North America as well as in the UK and India, as they can protect privacy while taking advantage of the benefits of open offices.

Examples of the use of private booths in offices

While some offices may be able to add a new conference room, in Japan there are many instances where leased offices are not allowed to expand or renovate. Private booths are convenient as they reduce installation costs, and can be moved around whenever the office layout is changed.

A variety of private booths have appeared on the market in Japan, four of which we will introduce below.

Kokuyo Co., a Japanese company that manufactures and sells stationery, office furniture, and office equipment, offers WORK POD. There are three types of booths to choose from, each optimized for different uses. One is the “standing type,” suitable for phone calls and quick work, the “sofa type,” suitable for web conferencing, and the “1-on-1 type,” suitable for face-to-face meetings.

They are equipped with a power supply, USB outlets, LED downlight (ceiling light) switches, and dimmer dials, and have excellent ventilation. They also have large glass windows to give a sense of openness, and are comfortable to use even when multiple booths are lined up. 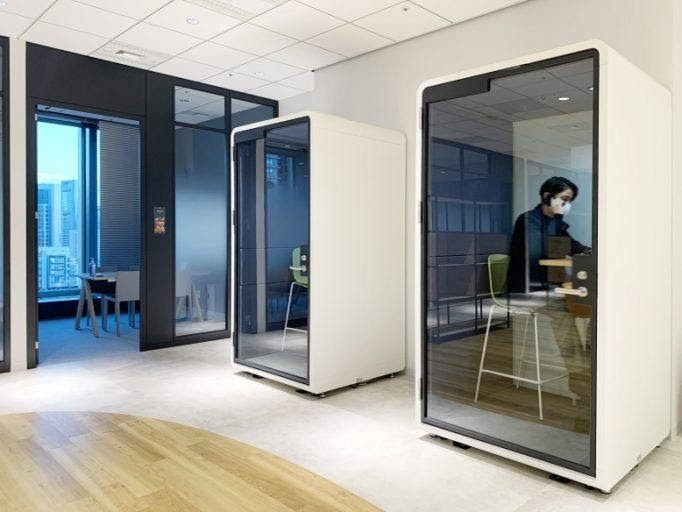 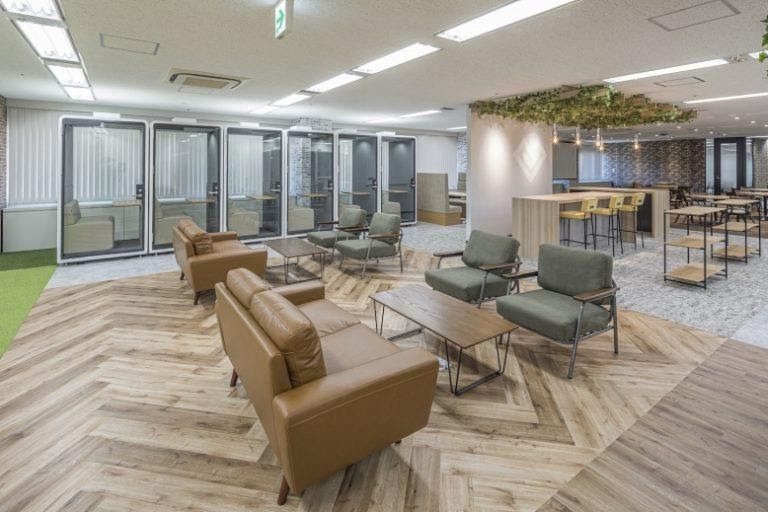 Telecube, provided by V-Cube Inc., a developer of business communication tools, is a work booth that does not require large-scale installation work. It is available in three types: “solo” for one person, “group 1” for two people, and “group 2” for four people.

Its wheels allow for mobility and it has excellent soundproofing and sound insulation. Users can also choose to go with a subscription plan (with monthly payments), which is appealing as it reduces the initial costs.

Solo Work Booth CocoDesk, provided by Japanese machine manufacturer Fuji Xerox Co., is a product designed specifically for office use. It is based on their other product CocoDesk, made for more general work usage outside the home. In addition to soundproof panels, 24-hour ventilation, antibacterial coating, sliding doors, and a heat-sensing automatic fire extinguishing system, the Solo Work Booth includes a LAN port. 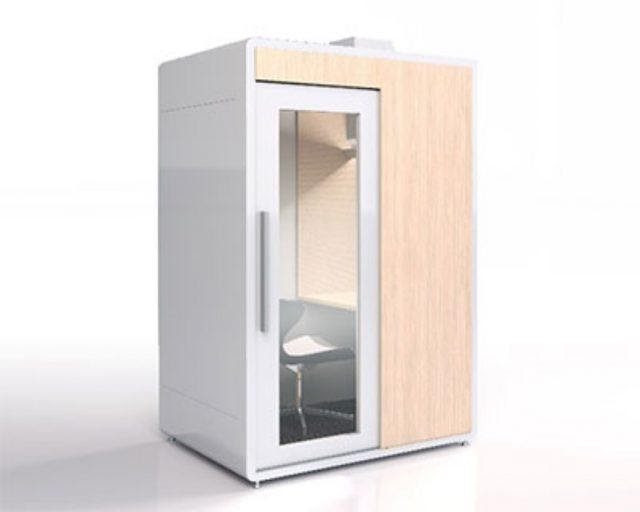 kolo, provided by Clas Inc., a Japanese company that offers subscription services for furniture and home appliances, is also available for rent. The interior of the booth is equipped with ventilation fans with motion sensors, LED lights, USB terminals, and power outlets. It also prioritizes sound, with its sound insulation and sound absorption technology.

Private booths that were typically installed in train stations and corridors in Japan are now spreading to commercial and government facilities as well. In this section, we will discuss the development of three services targeting general businesspeople: Telecube, STATION BOOTH, and CocoDesk.

In addition to the office installations mentioned above, Telecube has been set up in a variety of locations in Japan, including train stations, common areas of condominiums, commercial facilities, and government facilities. In October 2020, the company set up Telecube Web Conference Centers in two locations in Tokyo as a trial until the end of March 2021. It offered users a hands-free web conference service, allowing users to use the tablets, Wi-Fi, and lighting equipment in the booths.

In November 2020, the company also opened its first government facility in Ome City Hall in Tokyo. In December of the same year, the system was installed in a 7-Eleven store in Tokyo as a trial and is expected to become even more widespread in the future.

STATION BOOTH, operated by JR East, is one of the services of STATION WORK, a shared office business that operates mainly in train stations. The product was developed based on the Telecube, and is fully equipped with desks, Wi-Fi, power outlets, and small-scale air conditioning. It was first launched in Tokyo in August 2019, and has already been installed in over 30 locations as of February 2021. It plans to expand to more areas in the future. 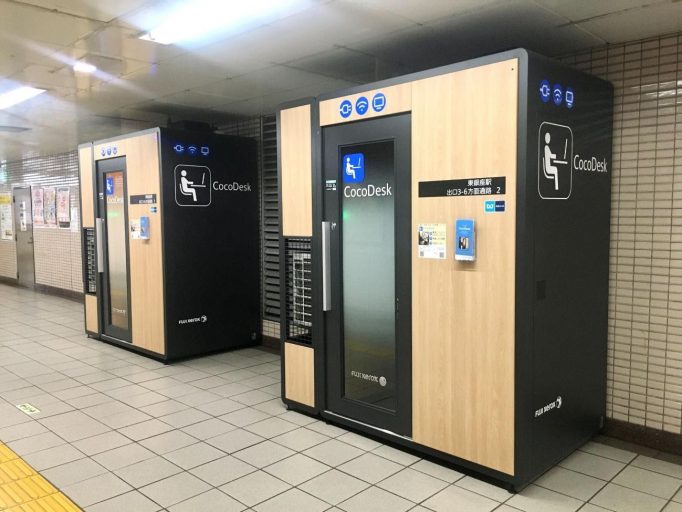 CocoDesk is a private booth that serves as the foundation of the aforementioned Solo Work Booth CocoDesk. It was installed mainly in Tokyo’s subway stations, but is now being expanded to private railway stations and office building entrances in the outskirts of Tokyo. There are also plans to install them in commercial facilities and shopping malls.

The three Japanese private booths mentioned above have one thing in common. They all started in train stations. Business people come and go day and night around stations in central Tokyo, where there is an abundance of available space.

The pandemic, which led to an increase in the need for online meeting spaces, helped these businesses grow immensely. Even now, the number of installed units continues to soar. 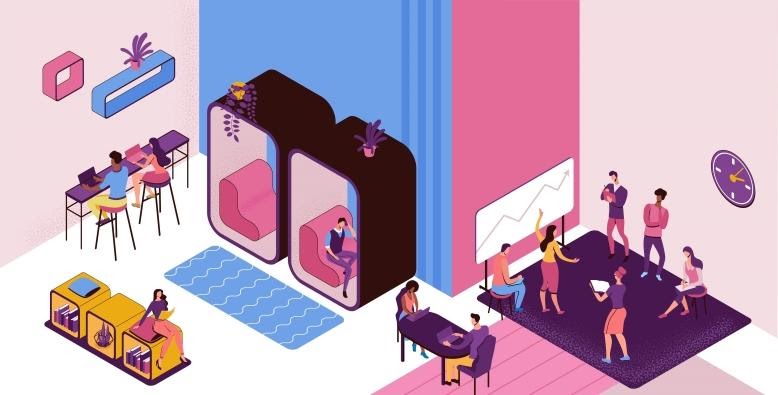 One of the advantages of the private booths developed by Japanese companies is that they are easily accessible for both office workers and general users. In office spaces, the initial installation costs are low, and general users in train stations can simply pay a one-time fee.

Private booths do not require major construction work and can be installed with relatively low risk. With work styles changing drastically due in part to the pandemic, private booths will likely have an even greater presence in Japanese society in the future.