In February this year, Fast Retailing, who owns the UNIQLO brand, built a new office in Ariake. In August, the office was awarded the Minister of Economy, Trade and Industry Award for best new office in Japan, which is the ultimate award under the Nikkei New Office Award program. The office is attracting a lot of attention for its practicality and the quality of its design. As well as shaking up the work environment at the company, the office is also shaping the wishes of Tadashi Yanai, Chairman, President and CEO of the company, to change the work culture in Japan.

The office is designed by Allied Works Architecture based in Portland, Oregon, a design practice that has handled many projects around the world including cultural facilities such as the Seattle Art Museum, the National Music Centre of Canada, and the United Kingdom Holocaust Memorial, as well as the home stadium for the Portland Timbers professional soccer team. According to Brad Cloepfil, Founding Principal of Allied Works Architecture, the greatest challenge was to what extent this one project could deliver on President Yanai’s huge theme of revolutionizing the work culture in Japan.

This article will focus on the West Coast inspiration for the Fast Retailing office. I will introduce three points that President Yanai and Mr. Cloepfil considered when introducing the office design and culture of the San Francisco Bay Area to Japan. 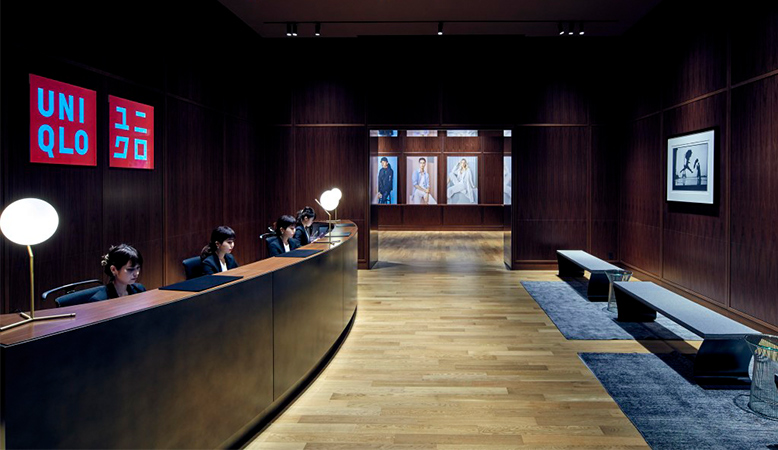 1.Introducing awareness of the city as a place where you can do all your work

The team led by Cloepfil did not want to simply transfer a Silicon Valley style office to Japan, so immediately after the start of the project in 2013, they decided to focus on freedom when considering the working styles of UNIQLO employees.

According to Cloepfil, the one thing you can say about employees at European and American corporations is that they want to do their work at the office, outside the office, at home, at a café, or even at a bar. So, they wanted to convey the basic concept of the whole city being a workplace and the freedom of choosing one’s own workplace to UNIQLO employees.

In actual fact, the name for the new office, UNIQLO CITY TOKYO, derives from this idea. The old office only had regular desks and two types of meeting rooms with glass walls. The new space features nearly thirty spaces including cafés and social spaces, a library, and a gallery, as well as a large hall with capacity for approximately 1000 people. Cloepfil had a Japanese house in mind when he designed the foyer and the community space for the office, which provide the employees with more working style options. The environment is designed for Japanese employees to stimulate collaboration between peers and to encourage people to move around. 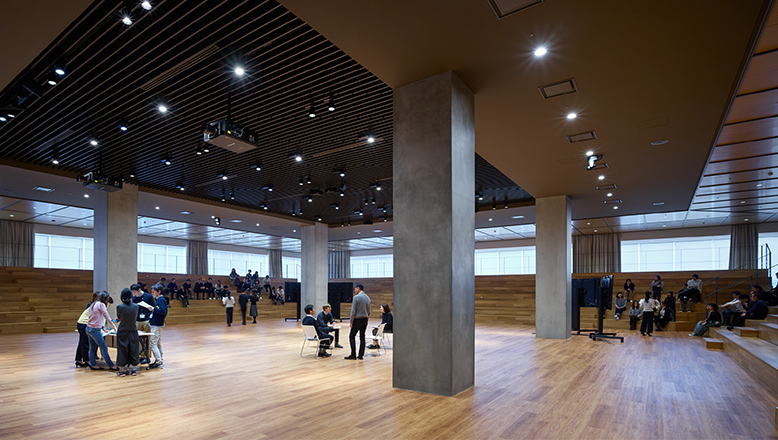 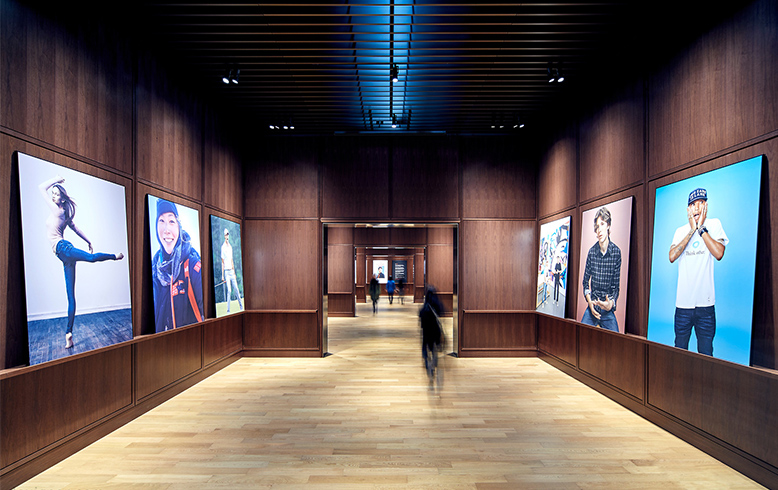 Wanting to create an atmosphere where the employees would feel at home, President Yanai introduced office furniture that gives the impression of a home in nature including wooden tables, lounge chairs, and sofas. The new Ariake office is associated with the Silicon Valley lifestyle where work and private life have blended together.

They wanted the office to express the kind of atmosphere that allows people to work anywhere in their own city.

2.Deliver the speed of a 13-day product release in the office

President Yanai emphasizes speed in the sense of getting products that keep pace with customer needs to the stores, and he says that his goal is to overthrow the Inditex Group who owns the famous Zara stores. He focuses on speed as one of the means to do this with a target of two weeks from product planning to delivery.

In order to make this into reality, the design department, the marketing department, and the distribution center have all been brought together at the new Ariake office. By physically bringing together employees from several departments in one office, the sequence leading up to product supply has become more seamless.

We also need to note that Fast Retailing has secured a vast office space of 16,500 square meters. Compared to the Midtown Tower office at Roppongi, where employees were divided across several floors, the Ariake office is not a vertical space but one that extends horizontally, making it easy for employees from various departments to meet face to face. As a result, the environment makes it easy to bring together teams of employee, which, in turn, raises efficiency at work. 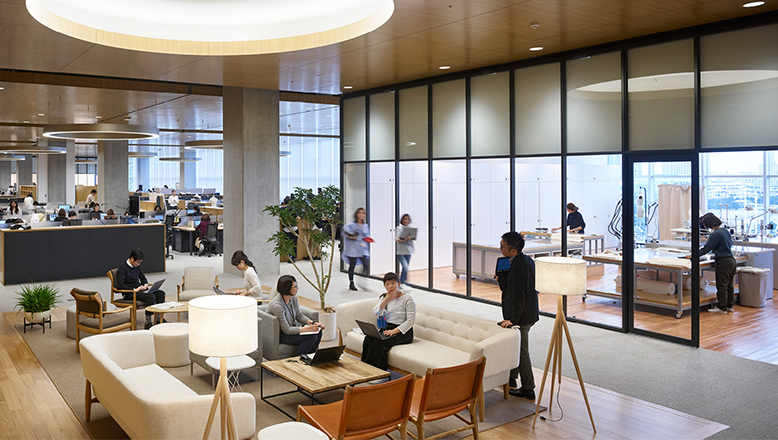 3.Getting the office ready for use from Day 1

Cloepfil says that he was confident of the beauty of the design because the plans were based on the working styles of the West Coast. But, he was extremely anxious about how well it would work in Japan in reality.

The office is after all a space for employees and it must have the kind of functionality that allows them to use it properly. He confirmed that there was a shared awareness of the kind of freedom that allows employees to work in their own way and in their preferred places, and shared the purpose and goal of the new office with the management staff through several induction courses at Fast Retailing.

On the first working day in the new office, Cloepfil was there to see the reactions of the employees with his own eyes, but when he saw how they used the different spaces in the office quickly and without hesitation, his anxiety lifted in a moment. The introduction of the new working styles was seamless thanks to the exhaustive employee induction timed to coincide with the presentation of the new design. 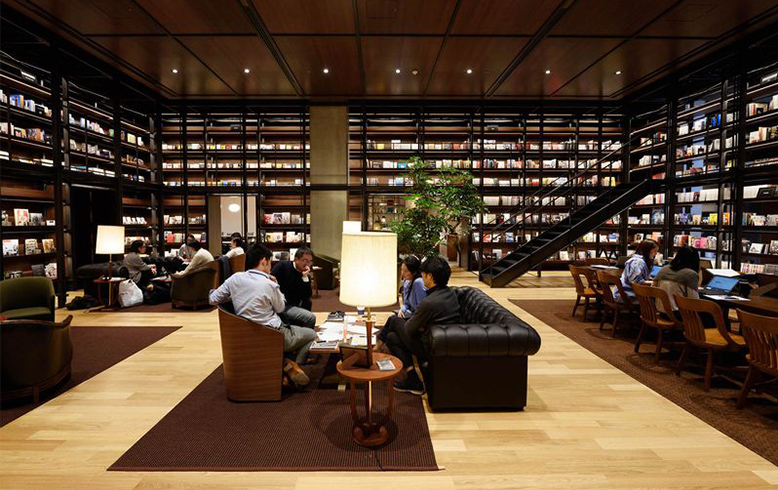 As a step in working style reform, American West Coast designs are starting to pop up in Japan with the aim of improving the office, and there is a general sense that the introduction to Japan is successful. Perhaps the problems with offices that have been resolved in the United States are surprisingly similar to those in Japanese offices.

Related articles:
Snow Peak Business Solutions is taking on the challenge of the nature-oriented workplace
Three reasons why offices capable of challenging the world are not possible in Japan

When Cloepfil saw the UNIQLO Roppongi office and the employees stuck at their own desks under a low ceiling, he said that the problems were very similar to the ones still challenging many corporations in the United States.