COMORE BIZ Talks: Learn how to interact with nature with biophilic office design

The buzzwords “biophilic office” has become a global trend, particularly in Europe and the United States In Japan, health management awareness is growing and attracting attention, but it is still in the beginning stages of being widely spread.

I interviewed COMORE BIZ, a service provided by Pasona Panasonic Business Service Co., Ltd. (PBS), for their reliable presence in the process of making more biophilic environments ” for offices in Japan. Based on the vision of “putting the workplace (work environment) into a light place (or natural environment optimal for humans),” the company aims to bring the working environment closer to the natural environment, thereby producing healthy corporate management and improving the productivity of employees.

This article explores how they took a closer look at the effects of the natural environment on humans through repeated practical experiments and the practice of biophilic design based on the evidence to visualize and create a service.

What is the true meaning and value of a green office?

I spoke with Executive Vice President Ryuichi Iwatsuki of COMORE BIZ on the matter.

A Japanese office in harmony with all things green

The sight of greenery in the office is not unusual in itself. Up until now, Japanese offices have been surrounded by greenery in a number of spaces, such as the waiting room. However, the purpose for including greenery was to allow a little relaxation in a stiff-looking office or to hide the dead space. No degree of consideration was given to the effect of greenery on human beings.

With two axes of focused on “solving problems of society” and “utilizing people,” PBS, which has been entrusted with General Affairs in the Pasona Group, always thought that the workplace itself had a great impact on human resources. Iwatsuki says that the origin of COMORE BIZ came to fruition when he encountered the ides of biologist Professor Edward O. Wilson whose advocacy of biophilia inspired the thought that greenery in the office can bring out positive effects more with one utilization method. Nippon Telenet Co., Ltd., a telecommunications company, and parkERs, which provides green space design, cooperated to create a service.

Professor Wilson advocated biophilia in 1984. At the time, the focus on the debates on the concept of biophilia was waning, but since 2000, the number of cases of intentionally introducing greenery in American offices gradually increased. The number of papers verifying the effectiveness of the biophilic office also increased, leading to the current trend of green offices. COMORE BIZ zeroed in on these studies and created the grounds to spread solutions based on scientific evidence in Japan so that the increasing number of green offices in Japan would not simply be “visually stunning offices,” but be something beneficial for humans that are backed by science. 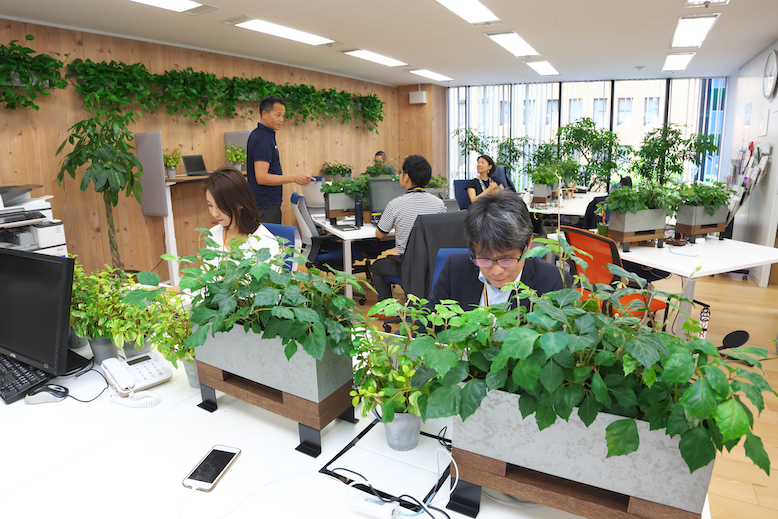 PBS headquarters office in Osaka. The unique design of the COMORE BIZ space is designed so that the bright green color is reflected in the field of view of each employee.

When the service to provide science-based evidence for supporting and designing biophilic offices actually started, it exceeded the initial expectations. Many people expressed interest in the introduction of the service ranging from Human Resources, General Affairs, and Working Style Reform departments of large companies to management departments affiliates and even co-working spaces. The main reason for their attraction to the service was the power of scientific evidence COMORE BIZ provided.

One important element was the Green Cover Ratio (GCR). The GCR refers to the proportion of greenery or plants in the field of vision (120 degrees) to where a person is seated. According to a study published in 2013 by Professor Emeritus Hiroshi Matsumoto of Toyohashi University of Technology in the Architectural Institute of Japan, people’s stress levels are reduced most efficiently in an environment with a GCR of 10-15%. At COMORE BIZ, they use this to ensure proper plant placement so that every seat retains this ratio of greenness.

It’s not just the visual that is being considered. For example, in terms of hearing, COMORE BIZ collaborated with KooNe , of JVC Kenwood Victor Entertainment Co., Ltd., which provided a bio-fidelity sound design using high-resolution sound containing high-frequency components exceeding 20 Khz, considered to be the audible area of the human ear.

By utilizing indirect sound technology that diffuses high-quality recorded natural sounds off walls and other places and faithfully reproducing the sound of birds singing from above and the sound of streams from below, the employee’s ability to concentrate and stress reduction are drawn out. With KooNe’s evidence that spatial sound has a relaxing effect, it is now linked to the project “KANSEI Projects Committee” which conducts research on how to improve the quality of the space for the five senses.

COMORE BIZ is also making efforts to bring out natural effects from the sense of smell using aroma. The sense of smell is very useful for switching the mindsets of workers, and in this previous article, it explained, “Unlike sight and hearing, olfaction controls emotions and instincts without going through the process of thinking and understanding the information obtained, sending signals directly to the limbic system.” In this way, the impact of a natural biophilic environment on the human senses such as vision, hearing, and smell is clear. It’s a win for HR and General Affairs personnel who seek a hassle-free introduction of services that lead to real results in health management.

COMORE BIZ, which is further promoting its evidence, announced their joint research with Toyota Motor Corporation in May of this year. “It’s research from a different point of view than [what we’ve done] before,” says Iwatsuki. Going beyond the framework of previous research on the effects of plants on the human senses, the researchers will deduce scientifically from a more comprehensive point of view what kind of effects a plant space itself has on humans. Although the working space is composed of many elements, they seek to answer what the most important element considered to be good for the body is in the natural environment and what methods are available to reproduce it scientifically.

Another research topic is discovering the specific positive impact of plants on humans. At the present, plants have been found to be more effective in reducing stress and fatigue levels in humans, reducing absences, and eliminating negative factors. In this collaborative research, they plan to look towards the positive effects on work habits, such as a better ability to concentrate or increased happiness.

And of course, the most important thing is to clarify the cost-effectiveness of introducing plants and greenery in the office. Iwatsuki says he hopes that by clarifying the benefits that can be gained through the introduction of greenery in Japan, more companies will be able to improve the health standards and productivity of employees through green products.

Introduced in March, COMORE BIZ showcased their new Contactless Vital Sensing which is quite interesting. This method, supervised by the Fatigue Science Laboratory in Japan, measures an estimated pulse rate from under the eyes of employees through the inner camera of their personal computer and figures out the stress level, fatigue level, and gauges happiness levels. It can be used as a tool to measure the numerical values before and after the introduction of plants and to verify whether the effects are seen in employees.

With this smart monitoring technology, it is also possible to report the measurements and results every hour. So, for example, it can measure whether the meeting was good or not based on each participant. It can be used as a tool to identify the relevance of employee happiness and productivity and to manage their performance as well. COMORE BIZ’s thorough attitude towards the pursuit of providing evidence is expected to develop further. 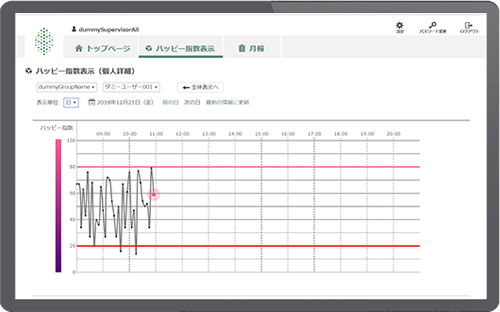 Iwatsuki gave a pleasant answer when I asked how someone could implement biophilia in daily life. Although he could not publicly disclose which plant has what effect, plants with soft leaves such as Everfresh and Sugar Vine plants are basically said to lower human stress. Also, as a way to do this in everyday life, it is easy to try putting a small plant on a desk because no matter what kind of plant is in your vision, your stress will not increase.

However, Iwatsuki says that the idea of simply putting yourself in a green environment is essentially not how you practice or appreciate biophilia. At its most literal, biophilia means “to love plants.” He said it is possible to get the most effects from greenery in the truest sense if each and every employee adopts the attitude to care for plants and lovingly nurture them.
In fact, Iwatsuki himself feels that he is only able to relax after he comes to his office in the morning and sprays mist to water his plants. There is meaning in the act of caring, and whether you can do a lot or even a small part, just giving a little care to plants will influence whether or not you can take care of others as a member of society. A plant can be a mirror that represents the person himself. 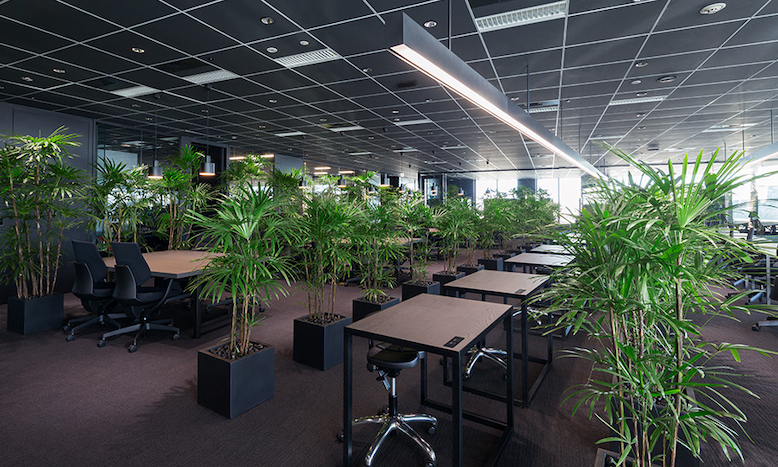 In any case, humans who have more opportunities to interact with greenery, not only in the office but also in their private lives, will learn how to interact with nature through caring for their surrounding plants, so they can spend their lives with calmness and lower stress levels. I believe that due to the large presence of COMORE BIZ in the Japanese working environment many people have been given the opportunity to know the essential understandings of biophilia.

Conclusion: To implement a green environment that makes the most of the characteristics of Japan

If you look at world trends, international companies are highly aware of the efficacy of plants and greenery, so the scale is on a completely different level from Japan. There are many examples of active investment in greenery, such as building an office on a green campus or planting a large number of plants around the office. In the United States, where the job-changing market is also thriving, “green” is an essential element in order to connect human resources.

However, Japan is a country rich in nature. Iwatsuki says, “You have to experience the wonder of nature,” but the rising phenomenon of people concentrating in urban areas is still progressing in Japan today. At such a time, an office environment where someone from either a rural countryside or even a bustling city can feel comfortable with plants and greenery in close proximity will be more relaxing. Because city migration this precisely became a problem for society when PBS decided they would “solving problems of society” through the workplace, all of Japan now has their eye on biophilia.

Now that the trend of “workcation” (work combined with vacation) is gradually becoming more widespread, the idea of bringing individuals closer to natural green spaces is likely to increase in the near future. However, for the time being, working people rarely relocate themselves to rural areas and will concentrate on the city office. Iwatsuki concluded that he wanted the office to be a green space full of smiles. For offices all around the world, Japan’s knowledge and trends of green biophilic offices cannot be overlooked.