A Proposal From NEW STANDARD: Making Employees Want to Come to the Office

As we continue to cover aspects of working spaces, we are often confronted with questions such as: “Now that it’s become a world where I can work from anywhere, where is the meaning and value of having an office?” and ” How can I make employees want to come to the office?” I had the experience to hear a very unique opinion to these questions that I would like to introduce to you readers.

This time we interviewed NEW STANDARD Co., Ltd., which just changed its name from TABILABO Co., Ltd. in August of 2019. In addition to the media business-centered TABILABO, which publishes topics touching on new values and lifestyles around the world, the company has been developing a new business model by expanding into media’s new business fields such as with “BRAND DESIGN & STUDIO DESIGN,” which solves business issues with its original marketing method based on enthusiasm, and the management (D2C) of event space & cafe (BPM).

The company’s corporate re-branding coincided with the change of its name, and the shift from a “media company” to a “movement company” was a major turning point for the company.

Current office after it’s move in November 2017 Until now, they have moved to Tomigaya, Yoyogi-Uehara, and Daikanyama as their workplace, but rented an office building for the first time in Ikejiri-ohashi for the fourth location. With the condition that a kitchen would be built into the office, the team looked for an office building that also included the appropriate plumbing, and settled in this place.

With a unique office environment including a special interior space and an event area & cafe called “BPM,” what values of the modern office are considered by NEW STANDARD?

I spoke with company CEO and co-founder, Shotaro Kushi. 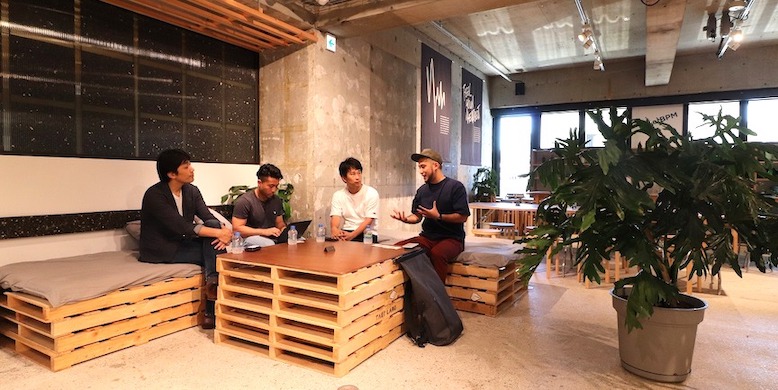 Why So Obsessed with the Unfinished?

The first thing that catches your eye as a feature of the entire office is the wooden office furniture that creates a natural space. This reflects the company slogan of “WE CREATE WHAT WE WANT” as much of the furniture is made by employees. In other words, DIY.

Reflecting the company’s motto of creating what we want and creating the future ourselves, rather than consuming the given things without thinking in order to continue to evolve, the theme of the office is “unfinished.”

The Oval Office on the third floor.

Focus booths in the office

BPM, an event space and cafe on the 2nd floor, was created as a space to provide a real life experiences that can not be conveyed only by the content and information transmission of web and smartphone through the digital media TABILABO.

It is now used as a rental space for things like live jazz shows, wedding parties, and even sometimes used as a venue for presenting new services. By moving the DIY furniture, it is also possible to customize the space to suit each use. 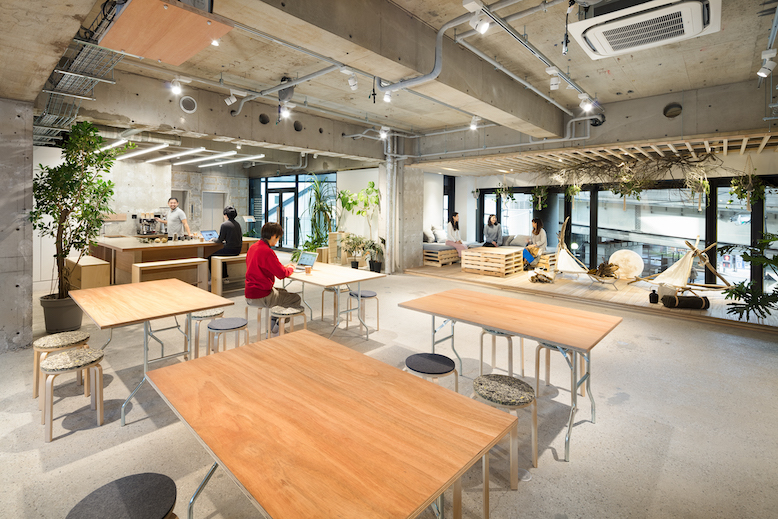 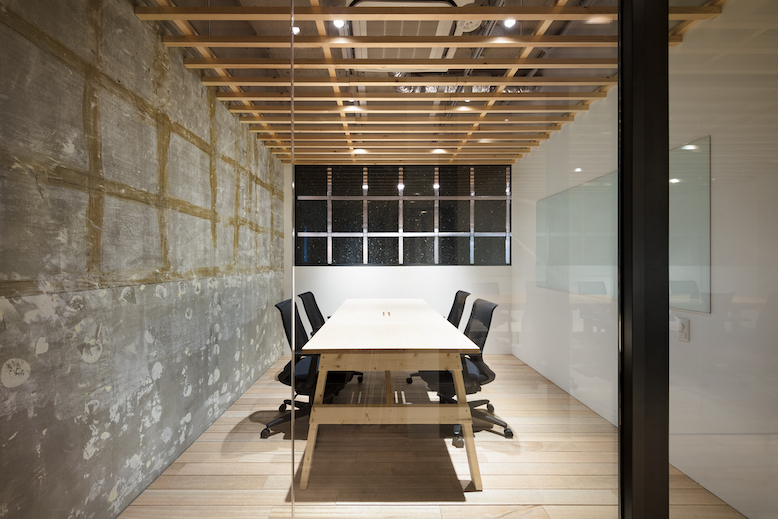 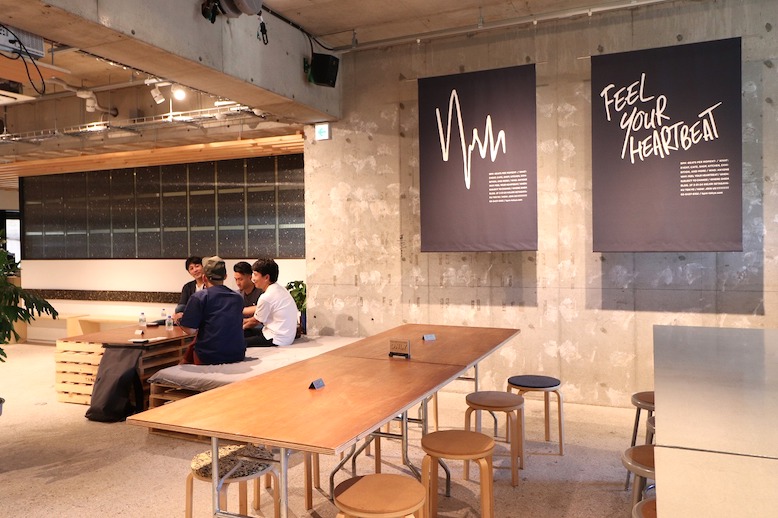 “BPM” is an abbreviation of “Beats Per Moment,” meaning a place to create “the moment when the heart beats up” through real experiences that touch different values. It comes from the tempo of the musical term, BPM (Beats Per Minute).

BPM has 12 speakers, and a 3D sound creator has designed the acoustic space. And with the fact that birds can be heard chirping depending on the location and time of the room, it also functions as a cozy cafe space for personal work and meetings with customers.

“Office” Does Not Equate “Workspace”

Now, as long as you have the internet, you can continue to work even without coming to the office. The workspace is now the web space. The value of the physical office space as a place to work has declined. Thus, the experience and benefits of coming to the office must be redefined.

For example, when you come to the office, you need to have the added value of being creative, getting input and ideas, and meeting people. The value of the office is re-evaluated by satisfying two items: the definition of an experience that can be done in an office workspace other than on the internet, and the definition of an experience that cannot be reached by an individual.

How can you use the hard side of the office to make employees feel that they want to come to the office voluntarily? Kushi states that this is one of the issues that are required of current managers in the theme of work style.

In fact, NEW STANDARD’s commitment to an office environment where cafes and kitchens can be prepared is based on the company culture, including the self-catering lunch culture that has not changed since its foundation.

Continuing to create the lunch on their own not only deepens the bond and sense of community between employees by “eating from the same pot of rice” but also has the connotation of learning content making and team building through cooking.

Even now, twice a week, employees alternately make lunch for nearly 80 people and eat together. Experiencing and embodying this corporate culture is one of the values that can be gained in an office space. 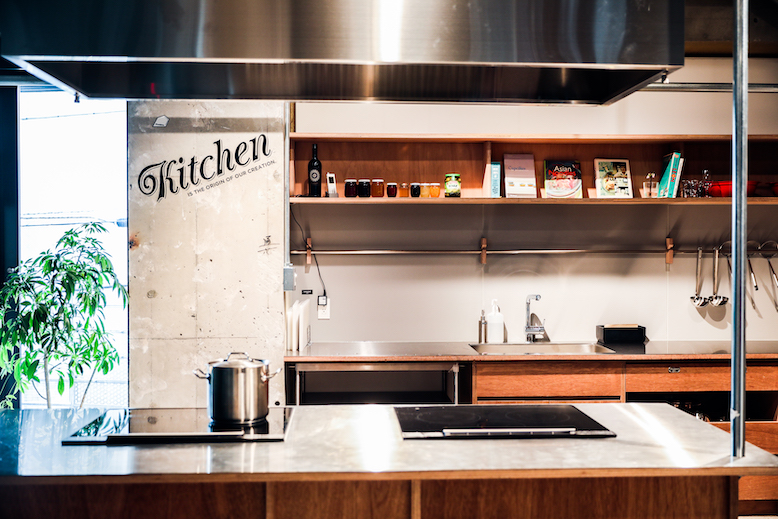 Kushi explained that OMO (Offline Merges Online), which has gained attention in recent years, is a useful reference when thinking about the future of such a modern office.

OMO is a new marketing strategy that focuses primarily on the retail and food and beverage industries. Until now, the concept of O2O (Online to Offline) has been the mainstream, and “online→offline” measures such as distributing coupons by mail or other means and inviting customers to a brick-and-mortar store have been implemented.

However, the shift in where customers buy products, not only in brick-and-mortar stores but also online, has blurred the line between online and offline. Thus, the OMO approach, which means “combining online and offline,” is now attracting attention.

For example, Apple is putting a lot of staff in its stores to focus on delivering real experiences and values, and Nike stores in New York have basketball courts and treadmills so customers can actually test their shoes. Target has also set up separate entrances for customers who want to shop quickly and those who want to enjoy shopping, increasing the number of stores with different traffic flow designs for the last two years.
All of these are examples of OMO, which aims to improve the user experience (UX) of customers by redefining the realistic experiences offered in stores and changing the way stores are run.

The Trial Zone at a NIKE SOHO store in New York

Just as stores are no longer simply “places to sell” in the retail industry, where online purchases have become more common, the value of offices today that can work online is no longer limited to “places to work.” In this era of being able to work anywhere, it is important to linguistically define the office.

Kushi states how it’s become difficult for employees to understand the nature of coming to the office just because the “established system where employees must come to the office” and must “continue to do so year-round.”

At NEW STANDARD, he wants the office to be a place where imagination and creativity can flourish, and where employees can feel and embody both the corporate identity and corporate culture.

They offer a variety of experiences to do so, such as using their own DIY furniture, using the kitchen space to make lunches for one another, and the LFMP ( Last Friday Meetup Party), where business partners, family, and friends are invited to party together on the last Friday of each month.

If the redefinition of offices progresses in many companies, the way of working will be reflected in each corporate office, and the office environment will continue to diversify. Companies that struggle with work style reforms may want to consider updating the definition of office and commuting as a start.