Hints on how small and medium-sized office buildings in Japan can survive and be put to better use, following the example of building services and corporate campuses in the US

A great many large office buildings are due to be completed in Tokyo over the next two years, from 2018 to 2020.

According to a survey published by Xymax Real Estate Institute Corporation in December, availability of new office space (“new availability”) across the 23 wards that make up central Tokyo is expected to be around 660,000 square meters every year from 2018 to 2020. Consisting of rentable space in new office buildings with a total area of 9,900 square meters or greater, this total is set to exceed new availability from 2008 to 2017, which came to an average of 541,000 square meters every year. Incidentally, the fact that new availability last year, in 2017, came to approximately 386,000 square meters goes to show just how significantly the city can change over the course of three years. While there are obviously some buildings being torn down too, due to their condition or for redevelopment, the total amount of rentable space in the five wards at the heart of the city – Shinjuku, Shibuya, Minato, Chuo and Chiyoda – continues to increase with every passing year. 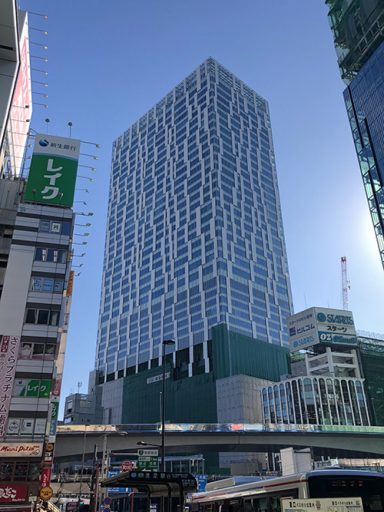 Scheduled to open in fall 2018, Shibuya Stream is due to house Google’s Japan office when it relocates in 2019.

The impact that this increase in large buildings and rentable space will have on the market is of particular concern to owners of existing buildings. From the point of view of tenant companies, the grade of a building is a key part of their office environment, and something that has a considerable effect in areas such as recruitment and branding. The availability of large, high grade buildings therefore stimulates latent demand amongst companies, encouraging more and more to relocate to new buildings. Of all the small and medium-sized buildings located in the 23 wards of central Tokyo, around 80% are thought to be at least 20 years old. Taking into account the impact of Japan’s dwindling population, the continuing supply of large new buildings is likely to result in even fiercer competition in the future. With that in mind, this article takes a look at how small and medium-sized buildings are going to survive in the future in Japan, especially in central Tokyo.

According to the Cabinet Office’s 2017 white paper on Japan’s aging society, the population of Japan has already begun the process of long-term decline. From 126.93 million in 2016, it is expected to dip below 120 million in 2030, and below the 100 million mark as numbers continue to dwindle after that, reaching 97.44 million in 2055 and 88.08 million in 2065. This highlights the risk that companies could go out of business when the current crop of management staff retire. A survey conducted by the Japan Finance Corporation estimated that there are 1,034,052 companies at risk of going out of business during the period from the end of 2015 to 2020. According to the Tokyo Statistical Yearbook (Statistics Division, Bureau of General Affairs, Tokyo Metropolitan Government) meanwhile, the total number of business premises and employees in central Tokyo came to 557,107 and 7,213,675 respectively in 2009, and 526,748 and 8,066,791 in 2015. This shows that, despite a general decline in the population and the number of business premises throughout Japan, and a decline in business premises in central Tokyo in particular, the number of employees in central Tokyo is on the increase. This increase in the number of employees per company is most likely driving up demand for office buildings where companies can secure more space.

Small and medium-sized building owners searching for ways to survive

Struggling amidst this current climate, small and medium-sized building owners are experimenting with all manner of tactics in order to survive. One option is to convert office buildings for alternative uses.

Located in Yokoyama-cho, Nihonbashi (Chuo-ku), the Rondo Building was transformed into a compact luxury hotel called First Cabin Nihonbashi Yokoyamacho in February 2017. With the number of visitors coming to Japan set to increase every year from now until the 2020 Tokyo Olympic and Paralympic Games, there is huge demand for accommodation facilities. Running a hotel in Nihonbashi, which is an ideal location for visiting tourists, is an effective way of targeting new customers. 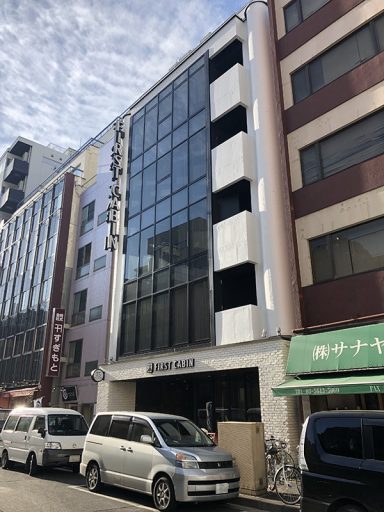 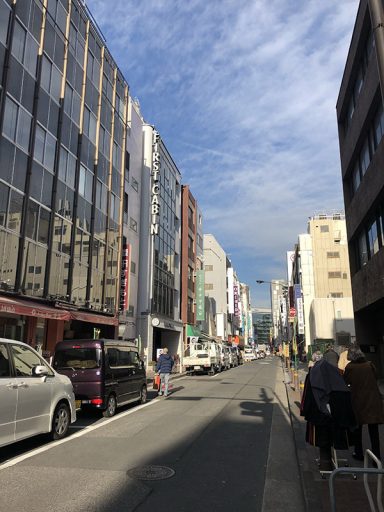 The nearest stations are Bakurocho on the JR Sobu Line, and Bakuro-Yokoyama on the Toei Subway.

The surrounding area is an old wholesale district.

In much the same way, a considerable number of small and medium-sized building owners are looking into converting their buildings for alternative uses, such as hotels, storage facilities, or nurseries.

Could Zo services for tenants show the way forward for building owners?

You may remember that there was an article on this blog that included a brief introduction to Zo.

Related article (Japanese only):How to pick up office in the US

We looked at Zo as a support service to help tenants lead full lives both inside and outside work. This could potentially show the way for small and medium-sized building owners in Japan too.

Zo is a comprehensive suite of amenity services provided for tenants by New York-based real estate firm Tishman Speyer. With a range of different service providers working with it, options range from beauty services, including hair, makeup and nails, through to massage, fitness and food delivery services. The name Zo comes from the Greek word for life “zoe” and the concept of being “in the zone.” From the point of view of building owners, the aim is to provide tenants of any scale, and their employees, with services that would ordinarily only be available to those working for large companies.

Undoubtedly, corporate giants such as Google and Facebook are able to build campuses that combine all manner of services and facilities, and provide their employees with an office environment that includes high quality dining and childcare options. Similarly in Japan, major companies occupying large buildings offer a whole host of services for those working in their offices. (The photo below shows Amazon’s campus in Seattle. There are more than 300 different species of plant from all over the world growing inside the glass dome. It would be impossible for all companies to access an office environment like this. Photograph courtesy of the Amazon Press Room.) 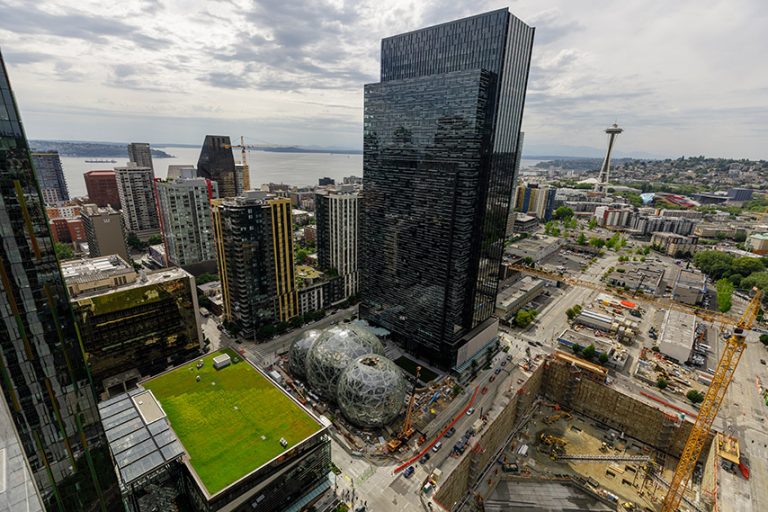 Images of Amazon’s campus in Seattle, Washington, in both the downtown and South Lake Union neighborhoods. Photographed from the roof of Amazon’s Port 99 building. (JORDAN STEAD / Amazon)

At the other end of the scale, there are hardly any examples of small and medium-sized companies building offices with services such as these. With the dominance of large buildings changing the face of the market in recent years, if small and medium-sized buildings were able to offer smaller scale companies suitable services that were easily accessible to tenants, they could make the most of their key attributes as smaller buildings and attract more tenants.

In 2015, Frontier Consulting Co. Ltd. conducted a survey in which they asked 400 job-seeking students about the sort of office environment they would like. This was followed by a similar survey of 400 working women in 2016. The most popular responses were that people wanted facilities such as post offices, gyms, convenience stores and medical facilities in the vicinity of their office. Some women were keen on pursuing interests, keeping fit or engaging in other activities during their lunch breaks. It is fair to say that companies should be choosing an office environment that factors in local facilities, as part of day-to-day support for their employees. 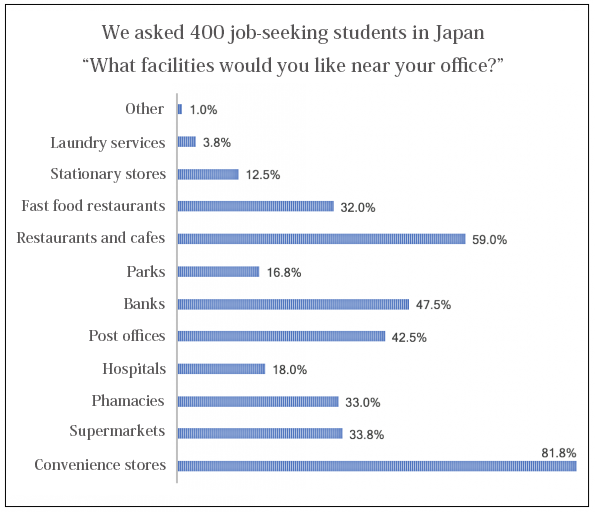 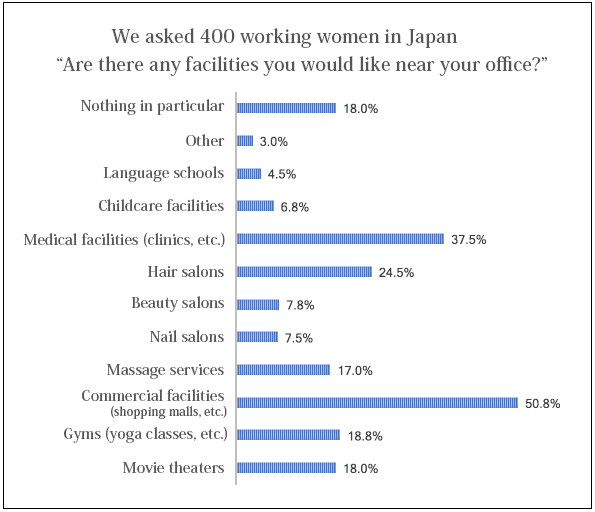 What is standing in the way of small and medium-sized buildings?

If you want to refurbish an office building in Japan, or change its use, there are a great many hurdles that you have to clear, including having all of the paperwork from when the building was built, and carrying out work to make it suitable for its new use. In reality, countless owners have considered such a move, only to abandon plans along the way. Obviously, the top priority has to be planning a building with appropriate facilities and a suitable structure to keep people safe. There is a sense however that the applicable legislation doesn’t really align with the current situation or how buildings are being used. Although focused on housing (particularly empty houses), a meeting of the Building Subcommittee of the Council for Social Infrastructure on October 6, 2016 included a discussion regarding how to facilitate the use of existing buildings, with an eye to revising the Building Standards Act. Hopefully, there will be a shift towards encouraging refurbishment of office buildings and changes of use in the future.

With trends such as telecommuting and co-working spaces, companies in Japan are coming up with a range of initiatives in an effort to transform working practices. On a global scale however, there are countless examples of companies discontinuing flexible working schemes and systems that allow employees to work from home. Companies need to think about their own corporate culture, as well as the nature of their business and individual work duties, so that they can choose and create the ideal office environment.

Difficulties managing small and medium-sized buildings are in no way limited to the center of Tokyo. There is a similar situation in other cities where there are lots of large buildings, and in provincial cities that are seeing their populations decline as workers move to the country’s five biggest cities. The owners of small and medium-sized buildings need to put themselves in the position of tenants, and think about what sort of new initiatives and services they can offer. If they do that, they should be able to offer tenants attractive services on a par with large buildings or west coast campuses, and pave the way for new office environments for multiple tenants, as typified by building campuses and city campuses.