A visit to the New York office of Nulab, the start-up with roots in Fukuoka

Established in Fukuoka in 2004, Nulab develops services for customers around the world based on three main key products: Backlog, a project management and collaboration tool; the Typetalk chat tool; and the Cacoo tool for creating sitemaps, wireframes, UML, network diagrams, and other configuration diagrams on the Web.

Many companies focus on first capturing Japanese users when developing apps and services, but Nulab is steadily increasing the number of overseas users.

I visited the Nulab office in New York, which is an important hub for opening up overseas markets. I interviewed Mr. Yamamoto and Mr. Gojima, who work in New York, about their approaches and working styles told through the office journey and in-house anecdotes

The reasons for choosing a WeWork tenancy when expanding

WeWork is a co-working space that started in New York. The company has recently expanded to Korea and China as well as many Western countries. In 2017, WeWork was operating 140 offices in 44 cities and 15 countries. In addition to the polished office design, the ability to participate in the WeWork tenant community around the world is another attraction.

When the three Nulab founders went to New York to explore the potential for business, they decided to make the city their hub. Rents at WeWork were comparatively expensive, but they loved the design and there were plenty of amenities. Since the average lease for an office is three years, they found the ability to adjust the contract on a monthly basis attractive and decided to set up at WeWork from day one.

Later, they moved to a different co-working space, but when they considered the long-term advantages of either going back to WeWork or renting their own office space, they chose the current office.

An engineer who moved to the United States two years ago, Mr. Yamamoto said it was fun to build the team from zero in a new place. “At first there was not so much to do, but we rented our own office, more people joined, and we were able to close deals. Finally, we got to the point where we felt that now it starts.”

The New York hub primarily develops overseas marketing plans and apps for overseas customers. With Japanese companies, you often see that they implement marketing strategies for the global market in the United States while development is done in Japan, but Nulab is committed to implementing development locally.

You cannot create products that sell unless you make them where the users are. Everyone recognizes that the United States is the ultimate tech market. Half-hearted approaches won’t have any effect here.

It is true that there is a big gap between personnel costs for engineers in Japan and the United States. However, it is not only a matter of development costs. Rather, personnel costs are high because there are many outstanding people and unless you have the leadership to retain these sorts of people you won’t be able to compete.

When I asked about the New York perspective on the West Coast with San Francisco and Silicon Valley, Mr. Yamamoto was upfront about aspiring to the West Coast, “It’s the Mecca of tech, and I still have the sense that I want to take on the challenge as an engineer.”

Another perspective is that with the arrival of Google, Facebook, and other major tech companies in New York, the tech industry in the city has picked steam. Many talented people arriving from the West Coast are switching to startups in New York. 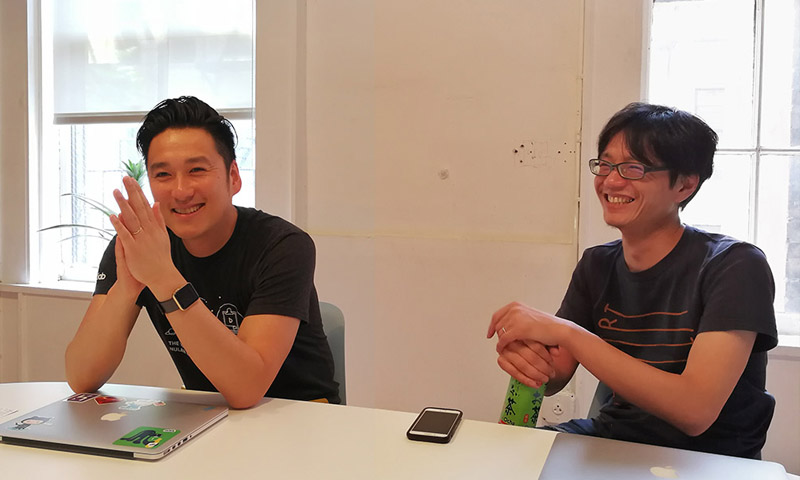 Mr. Gojima (left) and Mr. Yamamoto (right) during the interview

New York also has attractions that San Francisco and Silicon Valley don’t have. “There are a lot of bars and entertainment spots in New York and many engineers enjoy the lifestyle.” New York is the No. 2 market for startups in the United States. Silicon Valley is attractive in many ways, but an increasing number of investors with venture capitalists in New York and on the West Coast are gradually making New York their main investment.

Recently, Texas is also doing a thriving business. “There is the advantage of labor costs, they have the population size, and there is an airport that can be used as a hub. Texas is perhaps a little bit like Fukuoka in Japan.” Texas is located in the middle of the American South, but the state is twice as large as Japan, and the population is second only to California. The cost of living is also low, so in recent years, many corporations are looking at venturing into Texas.

Nulab has now set up its office in the Nolita neighborhood. With exclusive shops and stores lining its streets, the stylish neighborhood, which is adjacent to Soho, is popular with native New Yorkers. If you take a stroll through the area, you will see cafés, restaurants, and idiosyncratic shops, suggesting that this is a good working environment for young engineers. Thinking back, both Yamamoto and Gojima recall that they had to deal with a lot of issues when setting up the office. “To renovate the interior, there was a lot more paperwork than in Japan. If you don’t make good choices in the planning and application stages, the cost of the applications will exceed the cost of the renovation.” American offices are not restored to their original condition and the hassle with the paperwork is one of the reasons for the preference for handing over a property in its existing state. The situation varies depending on the scale, but for a small or medium-sized office, the first issue is to find a company that will do the applications, design, and renovation properly. (Photograph on left: The exterior of the office facing Bowery Street in the Nolita neighborhood)

There were other issues at the start of operations. While waiting to move in, they had an additional restroom installed so that there would be one for men and one for women. When they were about to install the signs for the men’s and women’s restrooms, some people thought it would be better to make them unisex instead of having separate facilities for women and men. Others wanted to keep them separate so there was this ongoing discussion in the company. Currently, the restrooms are unisex. Mr. Gojima and Mr. Yamamoto both smiled when they told me the story. “We went to all that trouble to install a second restroom and it turns out that one would have been fine.” (Image on the right: During the discussions they were also looking into installing a unisex sign.)

Work is something you do for eight hours

I suppose the working style in the United States is a bit of a concern. What do you think about the working hours and awareness of productivity?

They exchange glances and start by saying, “In the first place, people don’t work. It is a Japanese idea that Americans are productive despite going home after eight hours at work. Of course, the culture and social etiquette varies from country to country. The Japanese idea that work is something you can do in eight hours, but you spend ten hours doing it is the Japanese perspective.” Of course, if you don’t get the results, you can fire people, but quitting is also commonplace. It is routine to change jobs and hardly anyone asks about the reasons for dismissals or resignations in job interviews.

There are other concerns when hiring people. “Whether the person fits in or not. There is a strong culture in our office so that’s the first concern.” People will quit no matter how much you verify their resumes. “People quitting was the biggest culture shock for the founders.” Constantly thinking about people’s movement and whether they fit in well enough with the culture of the office to create something worthwhile. These two points are very important when hiring people.

In-house meeting room. There is a feeling of transparency and openness in the space.

You have to have a vision

People also ask different things of management. “More people want you to show that you have a vision than they do in Japan.” Actually, the most frequently asked questions at the interview stage are about the company’s vision. Sharing in the vision from day one and constantly comparing the company’s direction with one’s own is perhaps a way to develop without stress and to identify one’s own tipping point.

Currently, a lot of people in Colombia, Mexico, and other countries in Latin America use the Cacoo configuration diagram tool. Mr. Yamamoto explains what users, including the ones in Japan, appreciate. “We make tools for work, but we want to have fun when we work. This is something we care about. We started out making these products for ourselves as engineers, but we would like people who aren’t engineers, and people working in teams to use the tools as well. I think people appreciate this kind of thinking.” They sense the importance of values that are universal because they shifted the center of their activities from Japan to New York 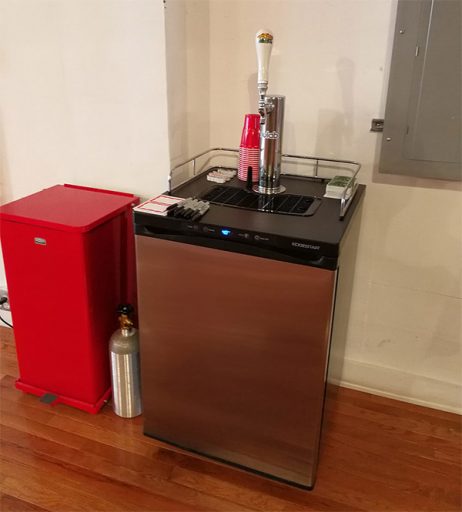 The beer dispenser at the office seems to symbolize the sense of wanting to have fun at work.

As of August 2015, Cacoo offers the Education Plan tool intended for anyone working in education. It is also a way to inspire users to make new discoveries. I look forward to seeing how the service will expand in the future, what new developments there will be, and how the office that supports all of this will change