Primo Orpilla Interview #1: We speak to the Studio O+A co-founder about the starting points for West Coast design.

“Employees have an intuitive understanding of the kind of workplaces they want. It is the job of the office designer to create spaces that support that gut feeling.”

These days West Coast office design is famous around the world after it was adopted by many startups in the San Francisco Bay Area. Studio O+A is the driving force behind the designs. The studio has handled the office designs for Facebook, Microsoft, Nike, Cisco, Yelp, Uber, and other corporations. Last year, the studio won the Cooper-Hewitt National Design Award in the Interior Design category, an award given to the most influential designs in the United States.

Today I am interviewing Primo Orpilla, the co-founder of Studio O+A who handles both office and product design. This three-part interview introduces his thoughts on the West Coast style as told to me in one of his designs, a van that doubles as a mobile conference room.

In the first of three articles, Primo tells me the story of how he became an office designer and how the West Coast style office has come to endorse diverse working styles. 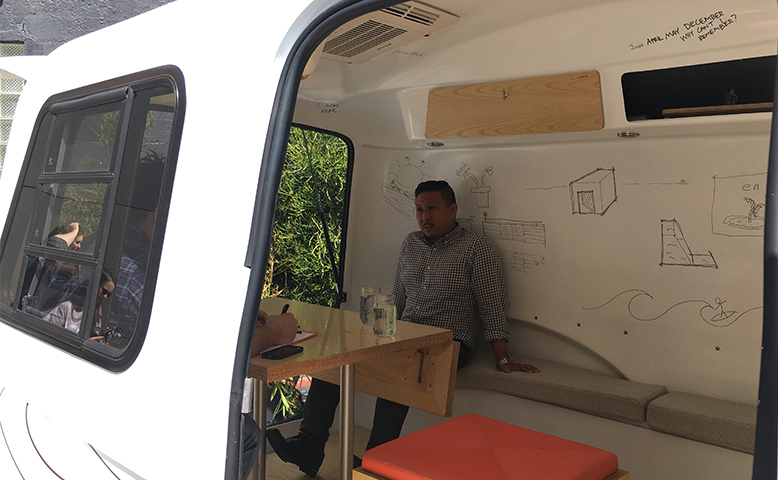 The evolution of West Coast culture and office design

The Bay Area is a very special place in the evolution of office design. The area is small and compact, a distance of barely fifty miles separating San Francisco from Silicon Valley. Many young entrepreneurs who share similar attitudes have come together here from all over the world. As the companies grow, I have seen how the working environment has been revamped through a repeated process of trial and error.

We kept records of our work with different corporations and little by little it became clear what good design means in the Bay Area, and what kinds of designs are more influential than others. Most of the inspiration for O+A designs is rooted in the efforts of companies to express their corporate culture and corporate concepts in the office environment. 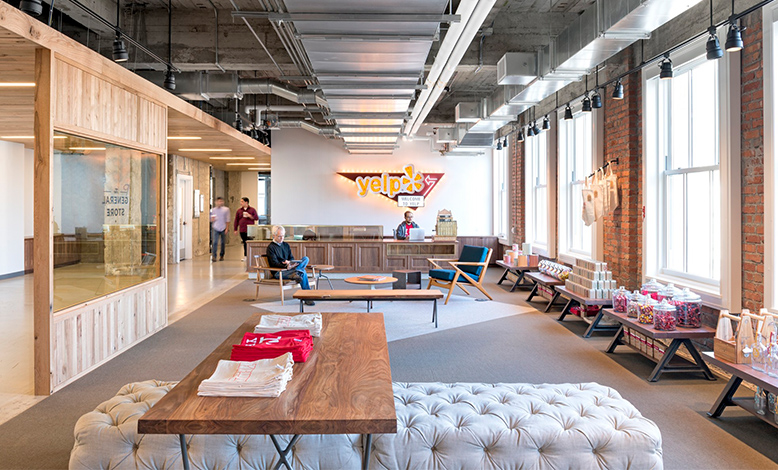 This is the Yelp office produced in 2012. Based on the idea of a General Store, we displayed candy like merchandise in one area of the design to suggest a sense of fun

Speaking of changes in office design in the twenty-five years since we launched the studio, I would say that the internal office hierarchies that used to exist have disappeared. Executives are no longer shut into private offices concealed behind thick walls. Rather, they do their jobs in different areas of the open plan office. The office has become a collective space where people can move around and the result is that innovative ideas can come out of anywhere.

In organizations where hierarchies are deeply rooted and where executives and teams work in separate rooms, there is a tendency for ideas to develop at a slow speed. I think this is inevitable if you consider that every step has to be approved by managers and directors.

Bay Area corporations welcome new ideas so it makes sense to put an end to this. When there are more participants in brainstorming sessions, a kind of Collective Brain emerges. In short, more ideas emerge when seventy people put their heads together than when the boss sits alone thinking up things. This is very important also in the sense that you have several generations collaborating on ideas. 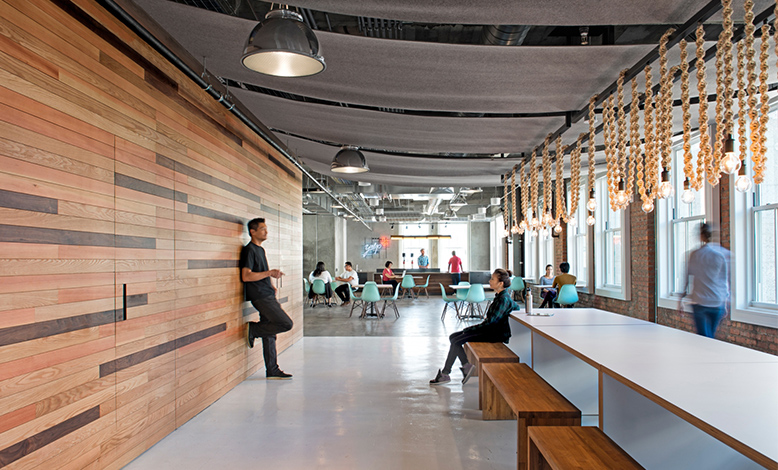 In the Yelp office, conversations start in different areas

Companies are revitalized when sharing ideas in the office is easy

“Fail first to learn” expresses a concept that is important to us: providing employees with an environment where it is easy to try out ideas. Even if some ideas are likely to fail, it is possible to motivate employees by showing appreciation for the fact that they come up with ideas. This is very typical of the Bay Area.

In many other corporations, the bosses still exert control over the ideas of the employees and it is not easy to arrange opportunities to share ideas with the executives. However, the Bay Area is the exact opposite. Executives and bosses always expect employees to be more assertive about sharing their ideas. In doing so, the issues don’t become entrenched and the employees themselves feel that they are contributing more to the company.

At O+A, we know how to design such environments. We create environments that nourish the collective brain, what we call call Community Thinking.

The office is more than a workplace

I hit on the idea of becoming an office designer after seeing too many offices that had been designed without thinking very deeply about the designs. I started to feel some nagging responsibility for this state of affairs.

Just like the Japanese, we Americans have worked long hours in hierarchies where the relationships between superiors and subordinates are clear. However, all of these workplace structures are the products of their environment. These are the places where we make friends and socialize together after work, where we eat our meals, and where we end up spending almost all our waking hours. This is why I wanted to make the office as good as it could possibly be.

It was always crystal clear to me that I would create an environment where people want to spend time precisely because people do more than work in the office. I was not interested in the kind of environment where you keep glancing at the clock and thinking, “It’s five o’clock. I can leave the office now.” 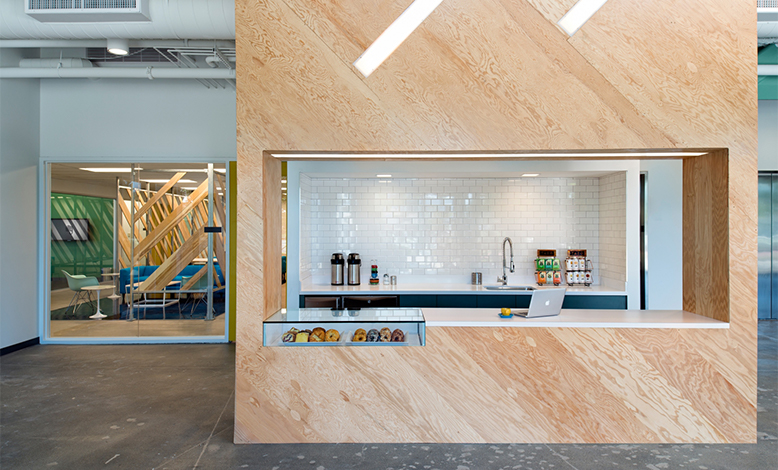 The 2012 design for the Evernote office. The reception area is a comfortable space where you can enjoy coffee and donuts.

In the office we can reclaim what makes us human

These days technology spills into every aspect of our lives, but this does not necessarily create a comfortable environment for us. In fact, technology has infiltrated our lives to the point where we hardly speak to anyone anymore. Even when we do contact someone else, we don’t telephone but we send a message. Little by little, exchanges between people are decreasing. 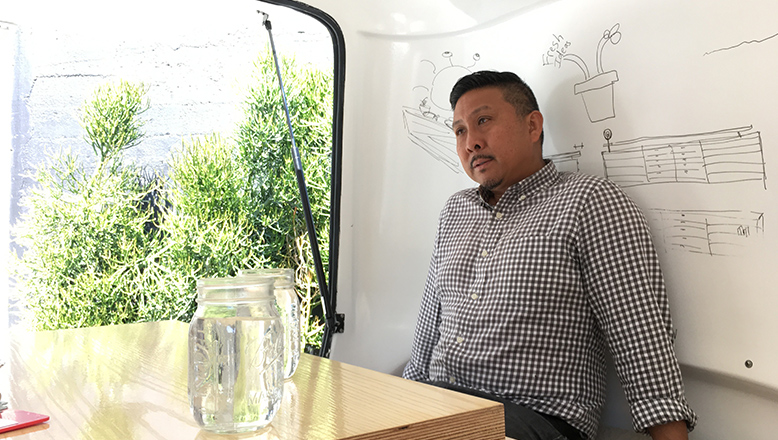 In Koreatown in Los Angeles, lots of young people go out to restaurants to have a good time with their friends, but I have noticed that most of them keep looking at their smartphones. Eating out with friends should be a way of enjoying exchanges with other people, a social activity. Nonetheless, I have seen with my own eyes how some people are so wrapped up in their smartphones that they can’t put them down.

I should also point out that this behavior is not limited to younger people, but every generation does the same. It is not something that is limited to Los Angeles either. 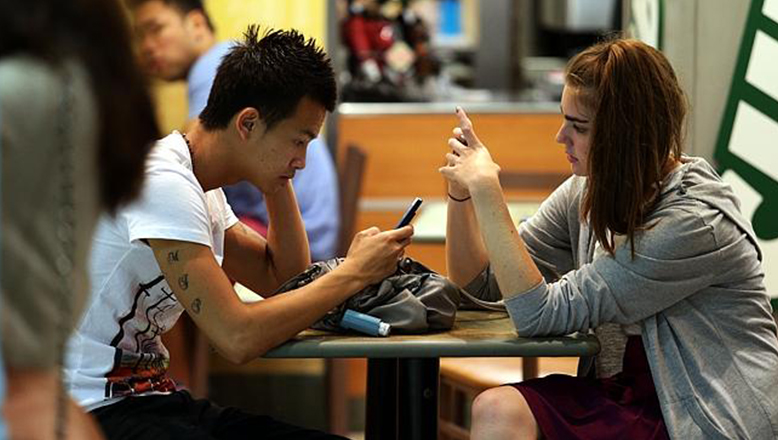 Today, it is possible to use office design to reclaim what makes workers human. We can create good old-fashioned spaces in the workplace, or spaces that evoke the analog days before technology became dominant. By putting away our smartphones for a while and talking to others, we learn more about our colleagues and not only what they do for a living, but also other things.

These days technology increases productivity so much that we have surrendered ourselves to it and stopped making time for ourselves. The office is a place where you can reclaim some of that time.

The ideal office resembles a school

Students are actually quite skilled at separating technology from the rest of their lives. After classes have finished, they put away textbooks and notes and join friends at a café, or head to a bar for beer or cocktails. They enjoy themselves and forget all about part-time jobs and studies.

When we design offices, we take a lot of hints from student life. You could even say that we perceive the office in the same way as a campus. The young Millennials who will sustain business in the future have only just graduated and they feel more comfortable in the kind of environment where they can relax without smartphones and other technologies. As a result, they find these spaces very attractive. 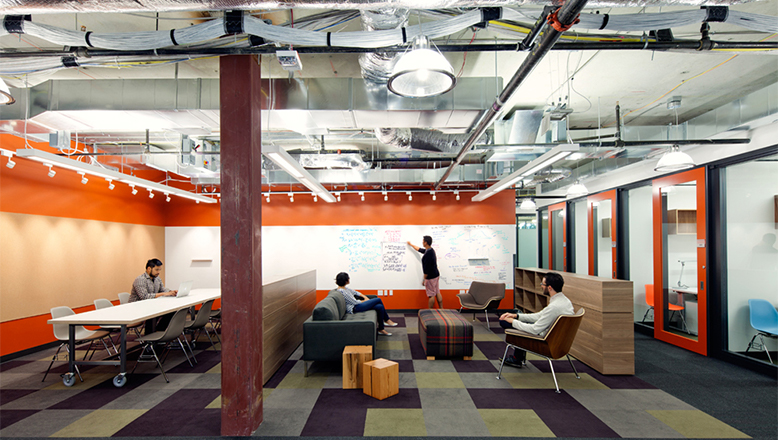 The 2011 design for Microsoft Building 4 in Redmond, Washington. The space is similar to a campus library with individual workspaces, meeting rooms, and spaces for recreation.

This is how the variety of spaces I used when I was a student can be turned into practical spaces in the workplace. In a space like this one, it is possible to work anywhere. If you want to be in a place where other people gather, you head to the café. If you prefer somewhere quiet, you go to the library, and when you want to be alone in a natural environment, there’s an open space or the park. All these spaces are different, but people have an intuitive understanding for what kind of environment brings out the best in them.

I use the phrase “the spectrum of space” to describe a workplace with a selection of different types of spaces that the individual can choose between depending on their gut feeling. Workplaces should be set up in such a way that they can support individual intuition. 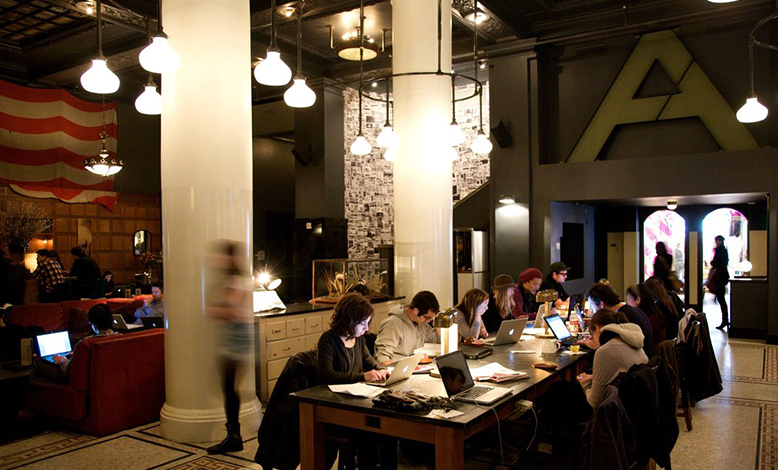 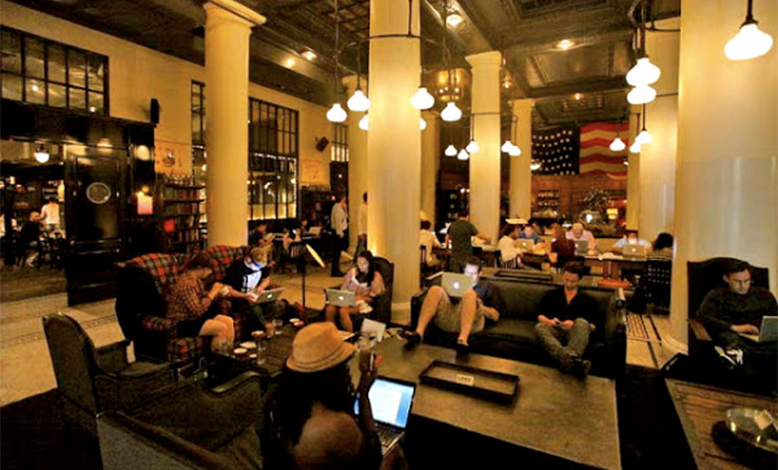 Ace Hotel in New York. This is a hotel lobby but a lot of young people come here to work.

With branches in New York and London, Ace Hotel is popular with young people. The lobby is furnished with a long table and large light fixtures hang from the ceiling. This is where you see young people working on their laptops, but they don’t talk to anyone. They just want to be some place where people gather together. They order drinks and immerse themselves in their work. The same space attracts both introverts and extroverts.

People around us all have their own favorite ways of working. Their preferences may often change depending on the situation. This is why we need to create spaces for them.