Design Blitz is an architecture and interior design firm based in San Francisco’s Financial District. Situated on a relatively quiet street in the district, the design studio has had a major impact on corporations worldwide.

Design Blitz has worked on a range of buildings for famous tech companies including Autodesk, Bandai Namco, Dropbox, Instacart, Skype, Slack, and Spotify as well as the San Francisco office of Microsoft. They have also designed for educational institutions such as the Academic Innovation Studio at the University of California, Berkeley.

Today we interview Seth Hanley, Principal and Creative Director at Design Blitz, about the projects that he has handled. 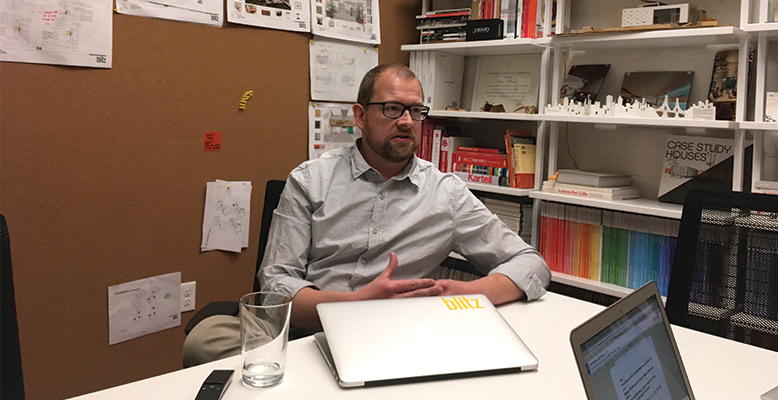 Designs by Blitz are consistently acclaimed

We have handled office designs for tech companies in different regions including outside the United States. At first, we focused on projects within the city of San Francisco, but fortunately, our designs were well reviewed and little by little our network expanded. I am still very proud to know that we designed several offices within walking distance of our studio.

The office for One Workplace, a leading retailer of office furniture in the United States, is one of our designs in the San Francisco Bay Area. The office is a vast open space in a large warehouse and in the center of it we introduced a distinctive space in the shape of an S. 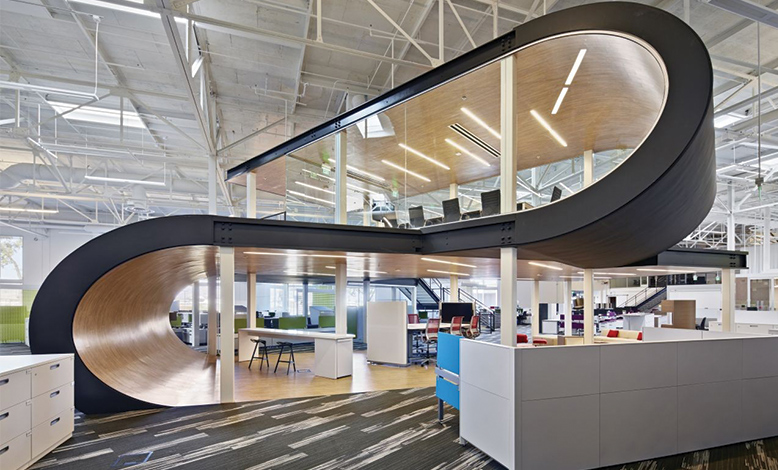 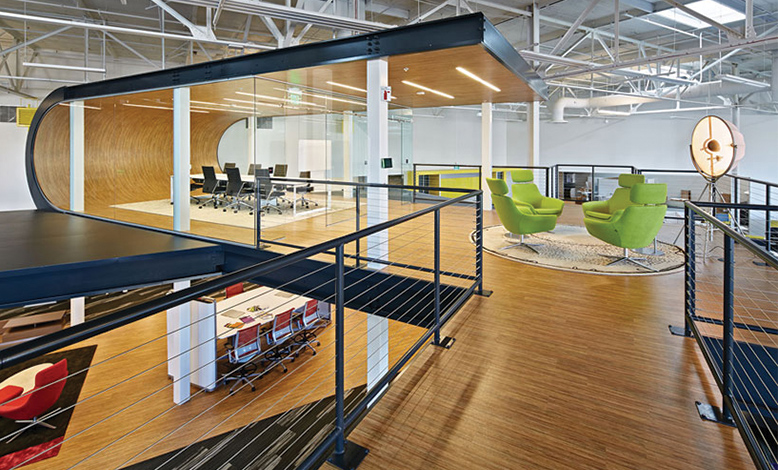 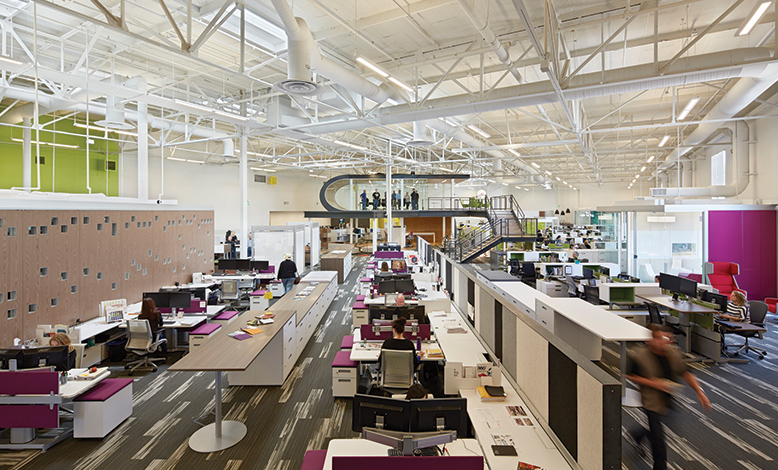 One Workplace is the only retailer in the San Francisco Bay Area handling products by Steelcase, an internationally leading manufacturer of office furniture. By placing the meeting room with its open views at the upper level of the S-shaped structure, we devised a showroom experience where customers can look across the office and see the employees using Steelcase products. At first, we were only meant to do the interior design, but One Workplace rated our design so highly that they hired us to do the exterior as well. 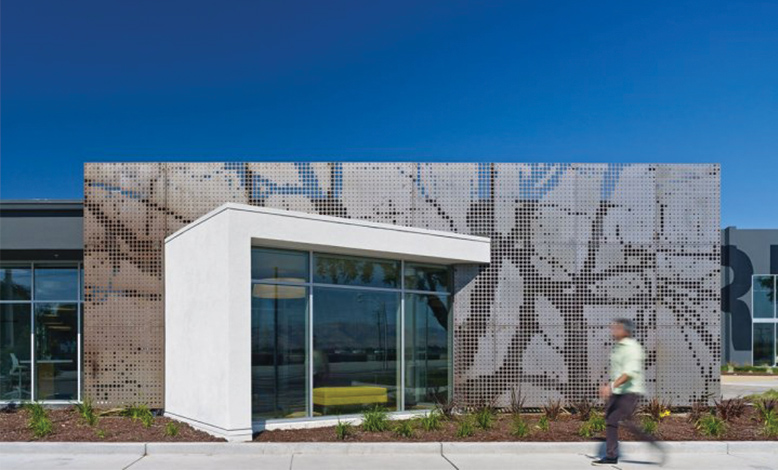 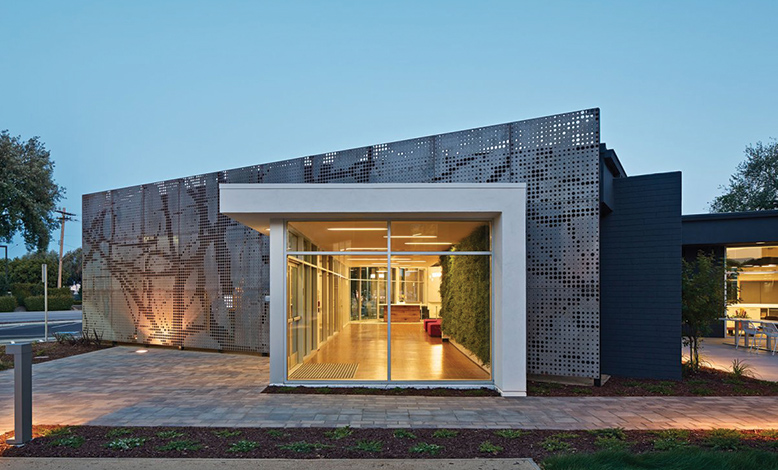 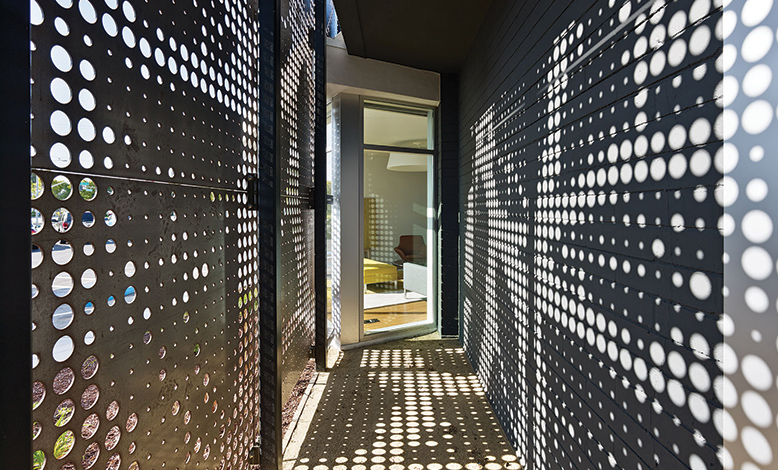 Focus on intergenerational differences among employees

Rather than building up using multi-story architecture and design, there is now a trend among traditional companies including One Workplace, which was founded in 1925, to secure vast plots for flat designs that present the expanse horizontally rather than vertically. Many corporations sense that one of the issues is to encourage employee interaction so different generations of employees who are accustomed to very different styles of working are placed together in the same space. When everyone works on the same vast floor, it is possible to create opportunities for employees who normally don’t talk to each other to meet face to face, which is not the case when the generations are divided across several floors. The expected outcome is dynamic exchanges between the generations.

The higher up the generations, the more people tend to feel reluctant about new office designs. We often appeal to people who feel this way by explaining that the job of the designer is not to deprive them of what they have had in the past, but to add something. It is easy to explain that the people working in the office can have a far better experience if their own favorite working styles are realized.

It is, of course, necessary to create environments for teamwork in the office, but it is also important to provide spaces where employees can be on their own, or rooms where two or three people can casually get together. The reason for all the focus on office design in the San Francisco Bay Area is that the designs present employees with many working style options and provide diverse spaces to keep everyone in the office satisfied. 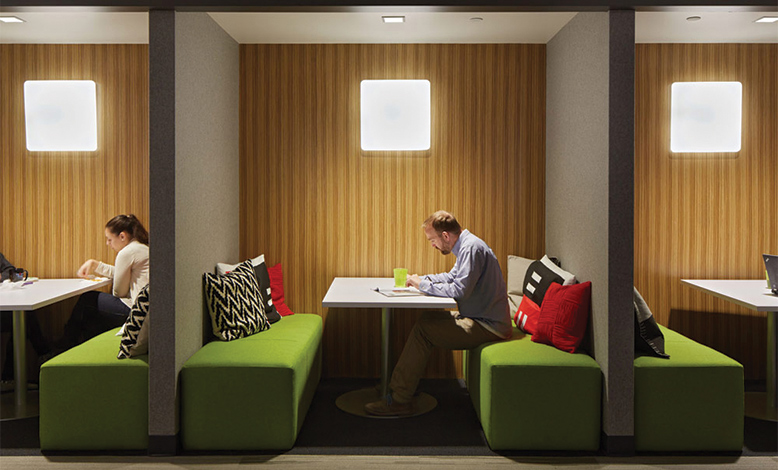 The SquareTrade office in San Francisco

We want people who are serious about work to take an interest in office design. The Bandai Namco project completed in 2016 is a particularly good example.

For this project, we put a lot of effort into finding the balance between being serious and being fun and playful. To start with, we were very serious about producing a design that would contribute to the people doing serious and important work at the company. We provided a lot of meeting rooms and presented a space that matched the corporate working style while making sure that people would not feel too constrained or end up losing the connection with others.

The other issue was to incorporate some playful elements. To render the playfulness of the world of the brand, we took inspiration from Pac-Man, one of the iconic games published by the company, to design a grid of somewhat narrow pathways through the office. As designers, we are comfortable with creating a fun universe that incorporates many such details to produce a creative and entertaining space and an office where people come together. 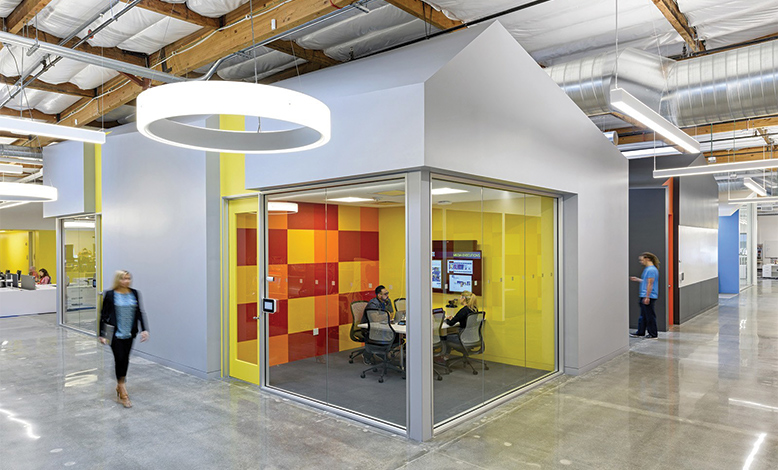 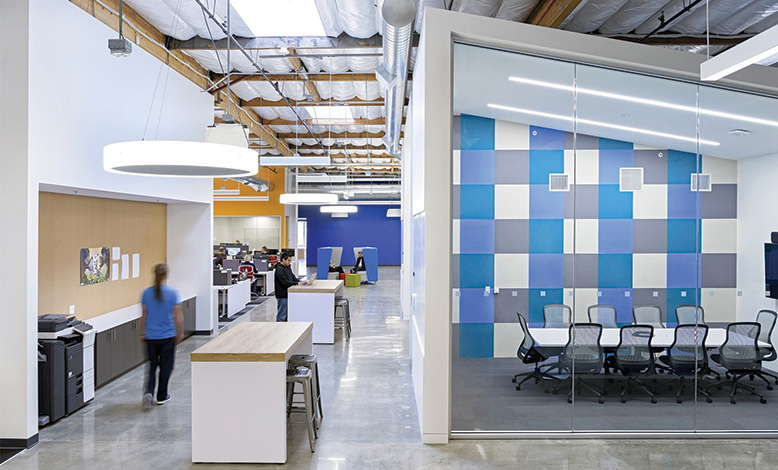 It was extremely difficult to work both these elements into the design, but it was also an extremely interesting project considering that we blended together the elements that express the culture of a company where seriousness and playfulness exist side by side.

The Zendesk office in Melbourne, Australia, is a project that we remember particularly well. The client was fantastic and the architectural underpinnings were good, so our interior design got off to a very good start.

At the Melbourne office, the core user group is an engineering team who require both quiet focus space and open areas for collaboration. We installed telephone booths, an area with bar tables for working on PCs, private meeting rooms, lounge spaces for casual get-togethers, and height adjustable desks so that the staff could work anywhere in the building. 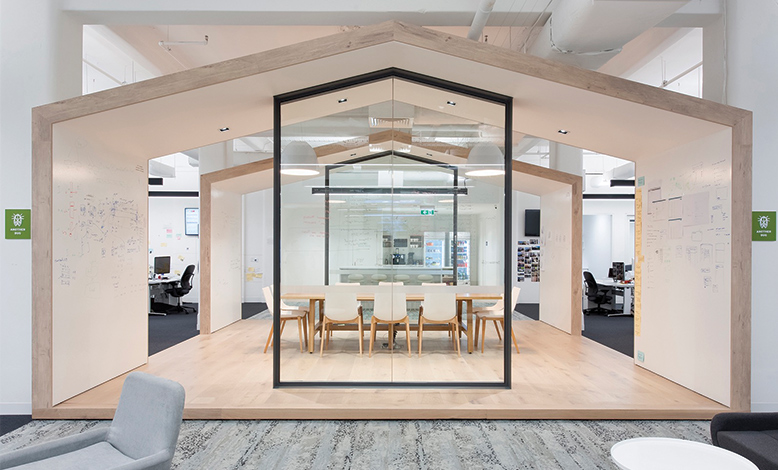 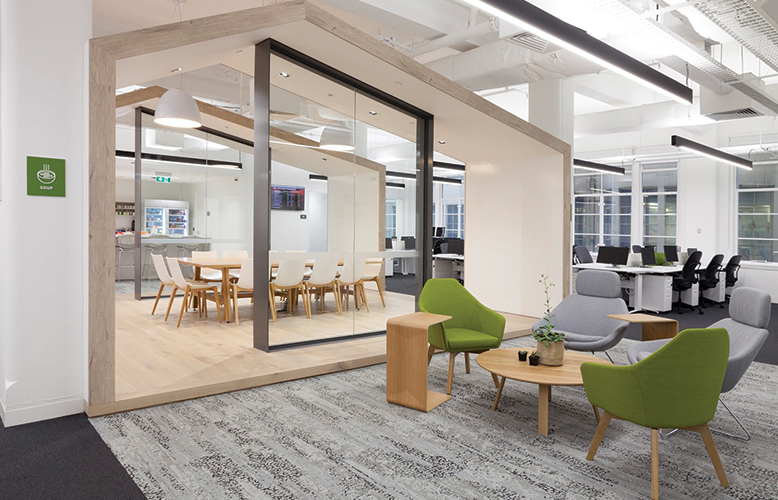 This is a collaborative space in the middle of the office. We tried to create a design that did not break up the views across the office.

I also have vivid memories of the project we did for the Zendesk head office in San Francisco. It was a very challenging project where we wanted to incorporate modern designs in a historical building with fantastic architectural elements. To show off the beauty of those elements, we focused on what could be removed and what was unnecessary rather than adding to the building. The brick wall in the photograph was shaved by filing to make the bricks look more impressive. Our approach was to consider ways of using the historical elements before adapting the space into a work environment. 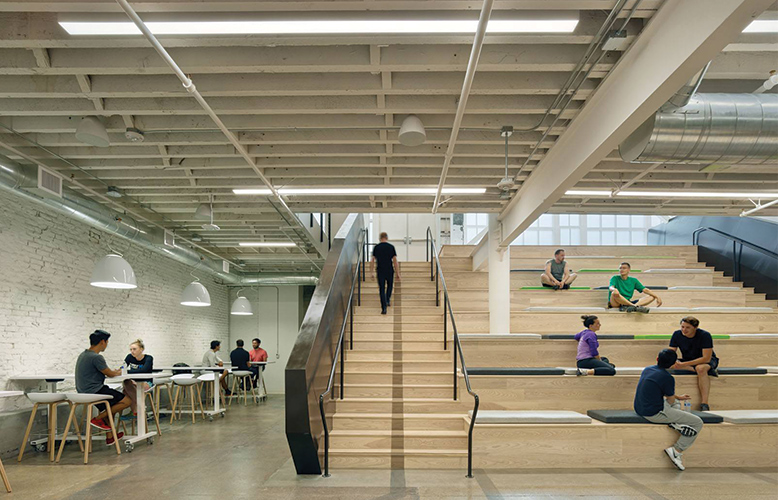 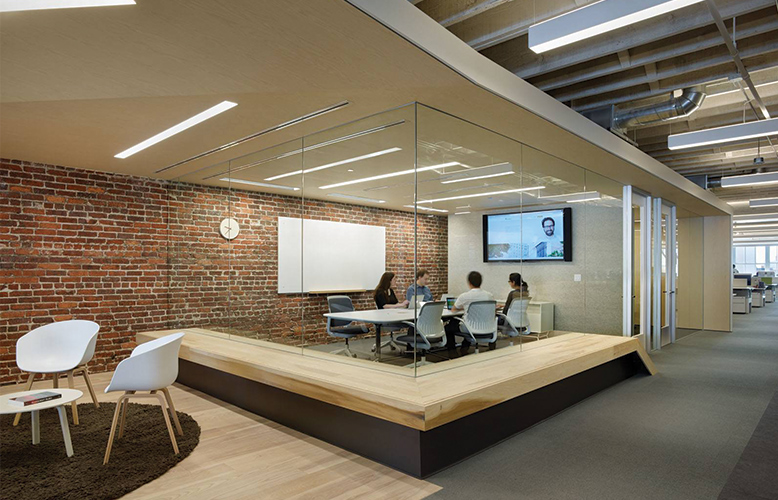 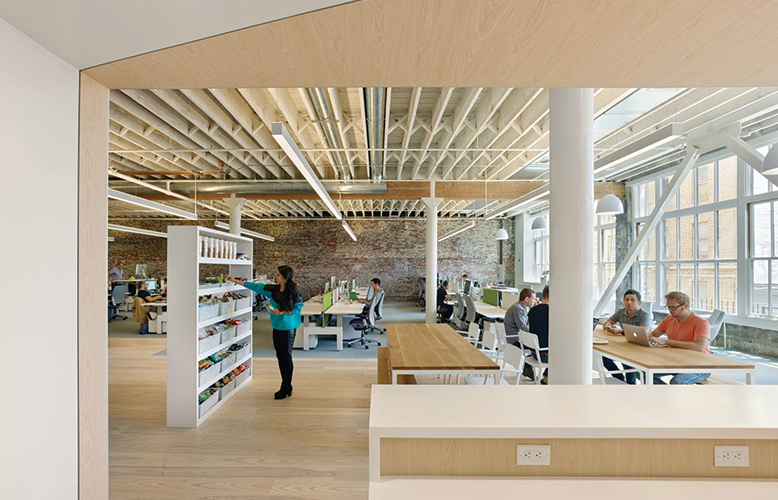 The Zendesk office project spanned four countries and five cities. It was extremely interesting to express the characteristics of each country while reflecting the consistent culture of the corporation across the five projects. It was important that anyone entering the office would immediately understand the nature of the company, but it was also important to capture the feel of the country and the place. 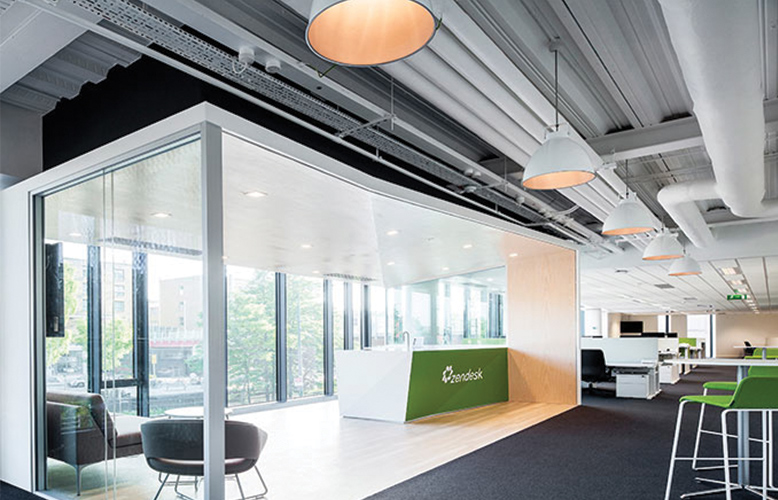 The Zendesk office in Dublin, Ireland 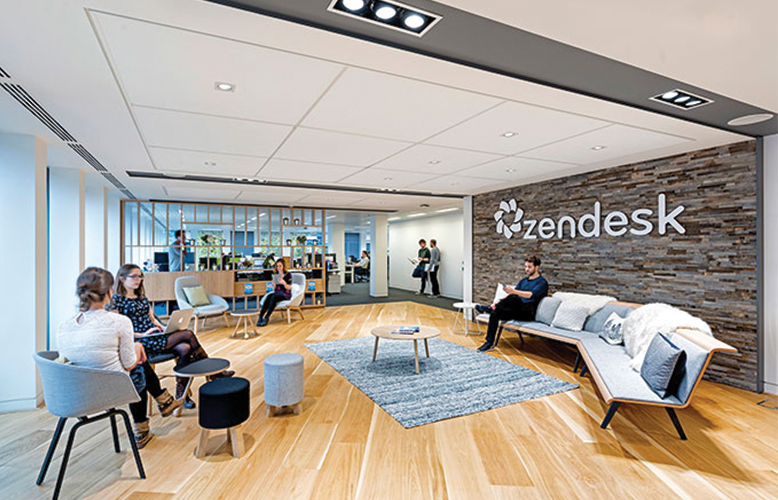 The Zendesk office in London, UK 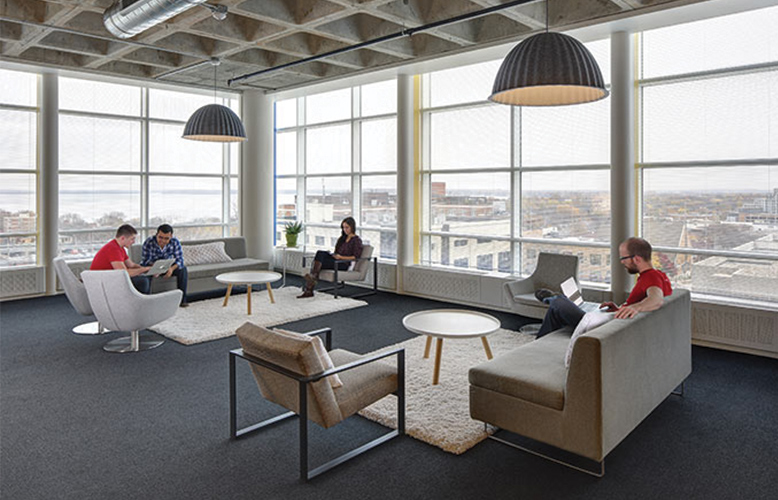 The qualities of being airy, humble, charming, and uncomplicated make up the core of the Zendesk brand image. In all its offices, the company aims for a minimalist space without any extra frills, using wood to express an organic feel and white walls to emphasize the natural color palette.

We have worked on many other projects outside the United States and all of them have been enjoyable experiences. We have come into contact with cool design ideas in different countries and we have gained an understanding of what is considered stylish. We also think about what we can learn and how we can integrate our own knowledge.

We have also been able to observe how people approach and react to our designs in other countries. The significance of design varies from country to country, and it is a given that people want different things from design. Ideas that are new to us inspire us and help us to energize our own design technologies. Our designs express our understanding of all the things we have learnt from design in other countries.